Penn Charter student Lily Mehta is one of many young dancers that will be participating in the Pennsylvania Ballet's upcoming performance of "The Nutcracker." (Photo courtesy of Jennifer Wallington) … 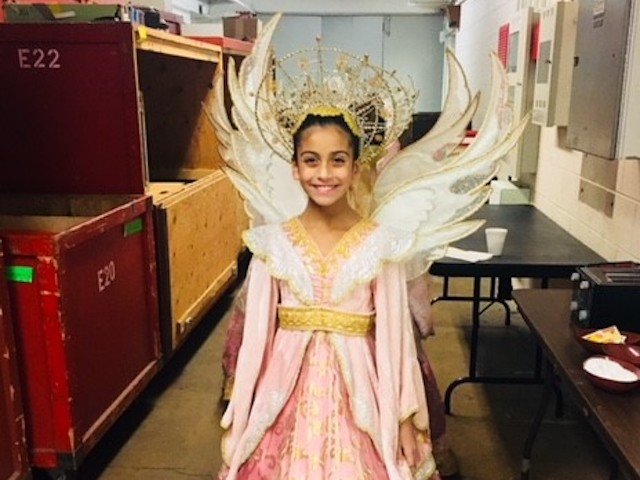 Penn Charter student Lily Mehta is one of many young dancers that will be participating in the Pennsylvania Ballet's upcoming performance of "The Nutcracker." (Photo courtesy of Jennifer Wallington)

Cristian Macelaru guest conducted the Philadelphia Orchestra in concerts Nov. 23 & 24 in the Kimmel Center’s Verizon Hall. The Chestnut Hill resident and former assistant, associate and conductor-in-residence with the Philadelphians led an all-American program that drew a full house Saturday evening.

Macelaru put a particularly personal stamp on the concert’s opening work: his own arrangement of a Suite from Jake Heggie’s opera, “Moby Dick.” The opera is appealingly tonal in its telling of Herman Melville’s classic novel about the search for the “great white whale.” Macelaru’s Suite is equally appealing in its evocation of the character of the opera and the sounds of its tale of doomed obsession. As he always did during his years with the Philadelphia Orchestra, Macelaru elicited superb playing from the ensemble, both intense and precise.

When it was premiered in 1962, Samuel Barber’s Piano Concerto, Opus 38, was hailed as an “American masterpiece.” And so it is. Like his earlier Piano Sonata, it speaks in a language both modern and traditional. It’s edgy, just like the world that surrounded its composition, yet it sings and develops within the context of the traditions of virtuoso piano writing and chromatic tonality. It’s also a splendid pyrotechnical display piece for any pianist who has the technique to play it. It’s a worthy successor to Rachmaninoff’s Fourth Piano Concerto and Rhapsody on a Theme of Paganini, Prokofiev’s Third Piano Concerto and Bartok’s Third Piano Concerto.

Saturday’s soloist was Garrick Ohlsson. He attacked the score’s towering technical demands with unflappable aplomb and invested his dazzling digital display with structural integrity and melting lyricism to offer an interpretation both brilliant and profound. Both he and Macelaru, who offered flawless collaboration, made a case for local audiences not having to wait another four decades before the Orchestra once again programs a true modern masterpiece that was composed by a West Chester native.

After intermission, Macelaru led the Philadelphians in the quintessentially American “Appalachian Spring” by Aaron Copland. Using the complete version for large orchestra, Macelaru took command over its sprawling panorama of settlers’ lives with a concise but sensitive hand. Individual solos sang out from within the woodwind and brass choirs, the strings offered that lustrous glistening tone for which they are internationally famous, and the percussion battery sparkled with shimmering energy. Macelaru and the Philadelphians received a well-earned ecstatic ovation at the concert’s conclusion.

Pennsylvania Ballet will present “The Nutcracker” Dec. 7-31 in the Academy of Music. The company will be performing George Balanchine’s neo-classical choreography to the timeless, romantic score by Peter Ilych Tchaikovsky. In a touching reminder of just how long Philadelphians have treasured the Academy of Music, it should be noted that Tchaikovsky, himself, once conducted a concert on its stage during the Russian master’s American tour in 1891.

Among the many young dancers taking part in this annual extravaganza will be 10-year-old Chestnut Hiller Lily Mehta. A student at the Penn Charter School, Lily began dancing ballet when she was only 6 years old, a course of joyful study begun at the Pennsylvania Ballet’s Pre-Ballet I School for budding ballet dancers.

Lily’s leap into “The Nutcracker” began when she was seven years old, and she has continued to dance in the Christmastime production ever since. She explained, “I am a polichinelle girl, a soldier and a party boy this year.” Most American ballet companies, with the notable exceptions of New York City Ballet and American Ballet Theater, rarely have enough boys in their schools to exclusively cast them in the first act’s party scene.

When I asked Lily what she most liked about dancing ballet, she answered, “I love how elegant and unique this type of art is.”

What is the most difficult part of dancing ballet? “What I think is the hardest quality in ballet is how focused and strong you need to be to succeed.”

And does she aspire to a professional career in ballet? “Yes. I want to be a professional dancer when I grow up and travel around the world to perform in different shows.”

The Episcopal Church of St. Martin-in-the-Fields, Chestnut Hill, will present its annual Advent Procession Sunday, Dec. 2, at 5 p.m. Parish music director Erik Meyer has announced a program that spans the sacred choral repertoire from the Renaissance to the contemporary.

Advent is the beginning of the liturgical calendar. It is a penitential season preparing Christians for the birth of Jesus Christ on Christmas Day. The Procession will begin with Giovanni Pierluigi da Palestrina’s “Vespers Responses.” “Vespers” is the name of the medieval liturgy of the Roman Catholic Church that formed the basis, with “Compline,” of Anglican Choral Evensong.