“The book is inspired by my mom, who lost her father when she was 18,” Laura Sibson said. “I wanted to write about teenagers navigating grief, and I thought that magic was a good metaphor … I hope readers love these girls as much as I loved writing about them.” 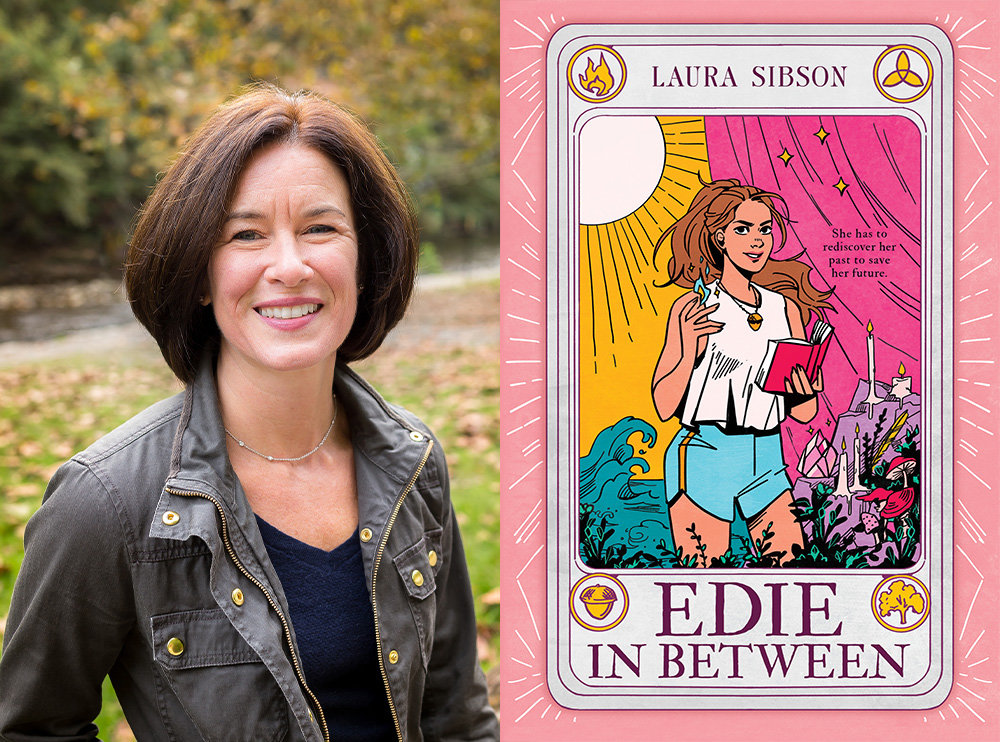 Chestnut Hill resident Laura Sibson is a creative writing professor at Arcadia University whose second YA novel, “Edie in Between,” was just released by Viking Press on Aug. 24.
Posted Thursday, October 21, 2021 6:00 am
by Len Lear

“This book is a battle cry for the silent, scared and shattered places inside us. Unflinching and lionhearted, this powerful novel is going to change lives and heal hearts.”

This panegyric is typical of the critical reviews for Chestnut Hill author Laura Sibson's compelling work, “The Art of Breaking Things,” her 2019 debut young adult contemporary novel that was dedicated to “all the girls who haven't been heard yet.”

Sibson, 53, is a creative writing professor at Arcadia University whose second YA novel, “Edie in Between,” was just released by Viking Press on Aug. 24. Its title character is a reluctant witch living on a houseboat on the Chesapeake Bay with her eccentric grandmother and the ghosts of all their ancestors.

“The book is inspired by my mom, who lost her father when she was 18,” Sibson said. “I wanted to write about teenagers navigating grief, and I thought that magic was a good metaphor … I hope readers love these girls as much as I loved writing about them.” The book explores the power of family, first love and discovering who you are and what you’re capable of in the wake of a devastating loss.

Like countless other novelists, both neophyte and seasoned, Sibson had a tortuous journey on the way to becoming a much-praised author. Her first manuscript, which she wrote in 2009 about sisters who find out they’re witches, failed to attract an agent.  (Nowadays a new author must find an agent and cannot go straight to a publisher, and it is hard to attract an agent if you are not already a published author.)

“For many years I wanted to be a writer and thought I had good ideas, so in my early 40s I finally decided that it did not matter what other people thought,” she said. “I guess that writing is a disease they have not found a vaccination for.”

And so she began a long period of dealing with rejection.  She began working with a freelance editor who was more interested in teen fiction than adult fiction, and sent her second novel on a flash drive to 25 agents. She received some interest but no offers of representation. She then started writing “The Art of Breaking Things” in 2014, and after finishing it two years later, was rejected by more than 40 agents.

But then the #MeToo movement gained momentum and the publishing landscape changed. Before you knew it, Sibson received two offers from traditional publishers, both for two-book deals.

She chose Viking (Penguin Random House). She insists that “there have never been enough movies with witches, although I prefer my witches as heroes, not villains. I adored the TV shows 'Charmed,' 'Sabrina the Teenage Witch' on Netflix and 'Discovery of Witches.'  And 'Hocus Pocus' feels like a must at Halloween.” (One could say the same thing about “Edie in Between.”)

Sibson grew up in Maryland and occasionally would camp out on a tributary of the Chesapeake Bay, which is the fictionalized setting for “Edie In Between.”  She came to Philly to attend Drexel University, where she earned a degree in business. She also has a master’s degree in education from the University of Pennsylvania and a Master of Fine Arts from the Vermont College of Fine Arts.

Before becoming a published author and creative writing professor, she was a career counselor at Swarthmore College, Bryn Mawr College and Drexel University.  “After guiding so many students to follow their dreams, I followed my own,” she said.

Sibson is extremely fit, thanks to running five miles every other day and cycling on alternate days — 20 miles indoors or 30 miles outdoors. She lives near St. Martin's Church with her husband, Tom, the CFO of an organization that provides autism support, two children and a yellow Labrador Retriever, almost 14 years old, named Nala (from ”The Lion King,” named by her children). “She’s a true sweetheart.”

Sibson is working on a new YA novel, in which a group of friends summons an urban legend connected to their old Philadelphia private school (Penn Charter) in hopes that the legend will grant them wishes. Naturally, things go terribly wrong. Also, there is a ghost hunter. “And kissing,” said Sibson. “There is always kissing.”

For more information, visit laurasibson.com. Len Lear can be reached at lenlear@chestnuthilllocal.com