“First Responders in Snow, Highland Avenue Fire House,” by Steve, was an honorable mention winner in the Chestnut Hill Community Association 2015 Calendar Contest. This photo is on the January … 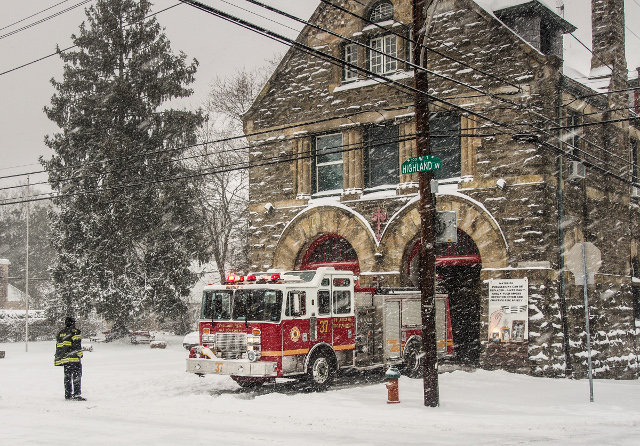 “First Responders in Snow, Highland Avenue Fire House,” by Steve, was an honorable mention winner in the Chestnut Hill Community Association 2015 Calendar Contest. This photo is on the January page of the calendar.[/caption]

Chestnut Hill resident Steve Feistel, 45, currently works for an industrial wholesale rep firm as an office manager and sales support, but his passion is photography. Feistel was the winner of last Year's CHCA Calendar Contest; he added two Honorable Mentions in this year’s contest, and many of his striking photos have appeared in the pages of the Local. Steve was also a great collegiate athlete and has a wide range of other interests. We thought he was worth learning more about:

Q: Where are you from originally?

A: All over. I've had a bit of a nomadic life. Initially against my will, and then later by choice. Born in Cincinnati OH and gradually migrated eastward to upstate NY via Columbus and West Virginia, all by the time I began kindergarten. I spent 20 years in upstate New York, where I finished school and college. After the final seven frigid winters in Rochester, NY, I escaped to Raleigh-Durham, NC, where I lived for about 15 years, before moving to Philadelphia. I went from abhorring the ice cold, gloomy winters of Western NY to eventually tiring of the hot, muggy summers of NC. Philadelphia has a nice balance of all four seasons, though I honestly was a little reluctant at first to come here.

Q: Where do you live now? For how long?

A: Chestnut Hill for the past two years after a stint in nearby Elkins Park for two years.

Q: Where did you go to high school, college, etc.?

A: Niskayuna HS, Niskayuna, NY. LeMoyne College in Syracuse, NY, where I played Division 1 baseball (pitcher) and am a recent inductee in the Athletics Hall of Fame. (Our '89 team was one run from the College World Series...and set an NCAA record for largest comeback deficit, 13-0, vs. U of Penna. in the quarterfinals; unheard of for a school of 1800 students with short seasons due to long winters and 1.5 scholarships to give out.) I was a walk-on but eventually earned a partial scholarship and was a top starter my last two years, which also included a no-hitter. I majored in business/marketing and baseball.

Q: What is your work history?

Q: When you were a kid, what were your hopes and dreams for the future?

A: I wanted to be a pitcher for the Baltimore Orioles or a golfer on the PGA tour or at least make a living doing something I loved.

Q: How and when did you get into photography?

A: My father introduced me to photography in my mid-teens and gave me one of his old film cameras. I always had an intrigue and interest in being a creative photographer, but I never got introduced to darkroom work, where I could get direct feedback and control over the process and see more immediate results of different settings. I was too wrapped up in playing sports and other hobbies being a kid to really devote myself to it, and it was costly to shoot and develop much film, at the time. I don't think my schools even offered photography classes either. I would spend hours in bookstores looking through photography books or poster shops, wishing I had the freedom, means and ability to travel and capture such breathtaking landscapes and images. I was always a bit of a daydreamer and imaginative, but I was consumed with playing sports.

A: I had a renewed interest in photography when digital cameras became affordable in the early to mid 2000's. First I had a Kodak point and shoot that allowed me to see instant results and do minor corrections, but years later I finally could afford a DSLR when they got below $1000, which gave me more control and better Image quality, and that is when my interest really took off and I was able to expedite learning more advanced techniques and master the basics of photography. It's an ongoing learning process...At first it was merely a hobby, but as I progressed I wanted to make some money with it or possibly work professionally, at least enough to fund my equipment. Through the years I've done some paid work and even a wedding for a couple I knew whose photographer ditched them at the last minute. My girlfriend, Julie, suggested that I enter the first annual CHCA Calendar Contest last year, and I was thrilled to have won it. Then I noticed one day that the CH Local was asking for submissions for photos after one of the big winter storms last year, so I sent a bunch in. Luckily, I was home from work and had been out in the snow taking photos and enjoying the winter weather. I got published that week, and it was not long after that I was invited to contribute more and was getting on the front cover frequently. Between those two things alone, it gave me a little extra motivation and validation to get more creative with my photography.

I guess I'd call myself semi-professional. I was very close to launching a photography business while in NC after being downsized during the financial crisis while at Credit Suisse, but then shelved it when I learned that I would be relocating. And this is when I started a website (www.2112photography.net). I have considered doing photography full or part-time professionally, but have had to keep putting the idea on the back burner for various reasons. The photos I enjoy the most may not make me a living, and on the other hand, I know I could make a living doing photos I might not particularly enjoy. One thing is true though, a professional might only get to spend 15% of his/her time taking photos. The rest is being a salesman, accountant, editor, etc. I have considered doing pet, portrait, real estate and food photography too. I'm pretty sure I could succeed as a wedding photographer, but that is probably not something I would want to do on a regular basis. Sometimes I'm too analytical for my own good.

Q: What do you like and dislike about the Chestnut Hill area?

A: I love the old charm and unique houses on tree-lined streets of Chestnut Hill. I really enjoy that I can walk less than two blocks and have my pick of two farmers' markets, shops, restaurants and two train stations. I like taking dog walks to Pastorius Park or the Wissahickon and volunteering at the concerts in the summer. The people in Chestnut Hill and all the surrounding areas are among the friendliest I've encountered in all the places I've lived. The only thing I don't care for is traffic on Germantown Avenue if I happen to catch it at the wrong time or the laborious drive to get to center city.