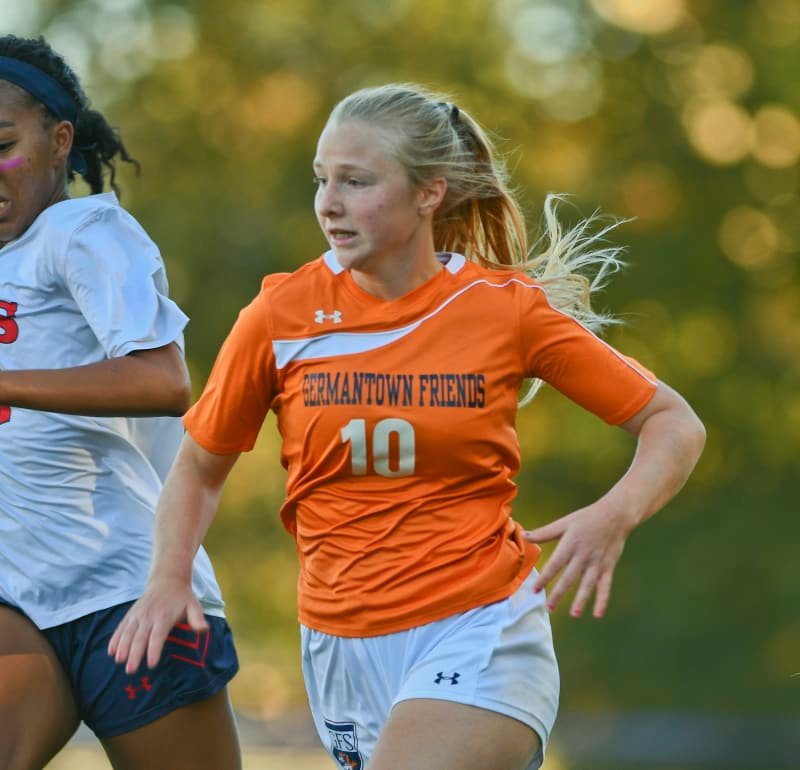 Fueling much of the Tiger’s offensive power was Margaret Harvey ‘23. The left wing with a nose for the goal and an eye for the prize was named to the 2021 All-State Girls Soccer Team composed of the top players from all Pennsylvania public, independent, and charter schools, selected by coaches.

Harvey is only the second GFS Varsity Girls Soccer player to earn the title of All-State and one of thirteen girls from the FSL in the last 33 years, when the Pennsylvania Soccer Coaches Association began announcing All-State teams.

Historically, about 60 athletes -including 25 forwards - earn the esteemed honor, placing Harvey among the best of the best.

“Honestly, I was not anticipating being selected for All-State at all so it came as a big shock when [Coach] Manolo pulled me aside after one practice and told me,” said Harvey. “It’s a great honor, and I’m really thankful for my team because they’re the ones who helped me get to this spot, and I’m not sure if I would’ve even been considered if it weren’t for the team’s success this season.”

For Coach Manolo Sanchez, Harvey’s honor was well deserved and an acknowledgment of her stellar offensive and team skills, a result of her continually upgrading her game.

“What makes Margaret so unique and valuable to us is that she plays with no fear and is ruthless in front of the goal. She wants to be the main player and takes the game into her own hands. She’s not afraid to make mistakes or take risks. Margaret is aggressive and always forces defenders on the back foot, and this sets an important tone for us in the attacking phase of the game,” Sanchez said.

A member of the Varsity squad since eighth grade, Harvey earned All-League Honorable Mention honors her first two seasons. The leap to All-State is a tremendous one, which Harvey acknowledges is due to her team’s unity as well as her fervor to capitalize on opportunities that her teammates create for her.

Harvey’s passion for the sport and her goal of playing collegiate soccer keeps her busy, training year-round with her club Steel United 04 Girls Elite, based in Broomall.

“Margaret put all of her tools, speed, footwork, and vision together remarkably well this season. What was more impressive was watching her shine as she set up her teammates time and time again to make the team better. By doing so, she grew her own game and helped elevate the team to league champs.”