At Springside Chestnut Hill Academy, last Friday's Inter-Ac League dual meet was scheduled for a relatively late 6:00 p.m. start, but the event was over quickly. 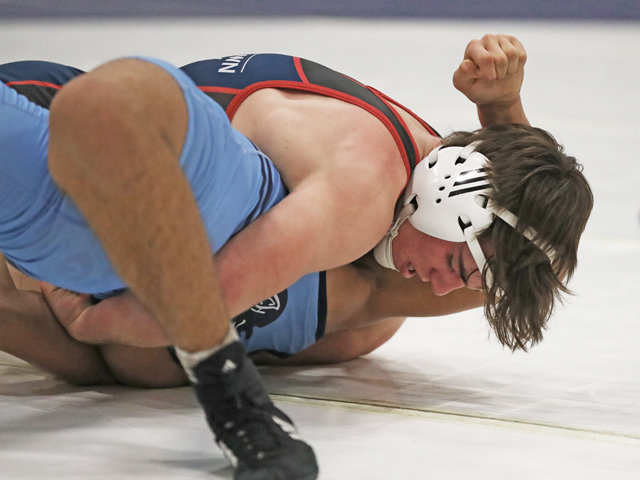 Patriots sophomore Owen Quinn closes in on a pin at 152 pounds. (Photo by Tom Utescher)

At Springside Chestnut Hill Academy, last Friday's Inter-Ac League dual meet was scheduled for a relatively late 6:00 p.m. start, but the event was over quickly.

Germantown Academy Patriots, so only one individual bout went the distance for a decision.

The lone decision was secured by GA, which also won four matches by fall and accepted five SCH forfeits to take away a 57-24 victory. The Patriots have done most of their wrestling in tournaments this season; in their only other dual meet prior to the SCH encounter, GA was overpowered by formidable Malvern Prep, 69-9, on January 10.

One pin and three forfeits handed over by GA got Springside Chestnut Hill to its total of 24 points last Friday. The Blue Devils, who have regularly engaged in dual meets all season, owned a record of 7-4 after Friday's tilt.

With the meet starting with the 145 lb. class, Springside Chestnut Hill took a 6-0 lead as the visitors forfeited at that weight to Blue Devils freshman Micah Ford. The lone decision of the evening followed at 152 lbs., where freshman Tre Stubbs of the home team was pitted against Germantown Academy sophomore Owen Quinn.

Not many points separated the two grapplers through most of the first two periods, with each man recording a three-point near fall at one stage. Stubbs trailed 9-7 but had control late in the second round, then GA's Quinn gained some separation at the end with an escape and a takedown.

Behind 12-7 for the start of round three, Stubbs escaped after 50 seconds and then executed a takedown.

Having trouble turning Quinn, Stubbs let him up with 25 seconds to go. With the escape, the Patriots 10th-grader was up by three points (13-10), so Stubbs was hoping to take Quinn down right onto his back in the short time remaining. That didn't happen, and Quinn's decision accounted for Germantown's first points of the meet.

GA quickly took the lead in the team scoring when SCH forfeited at 160 lbs. to junior Sam Cerebe.

Facing Patriots senior Deon Savage, Blue Devils sophomore R.J. Moore was in a good position after the first period, leading 7-1 on the strength of several takedowns and a near fall. 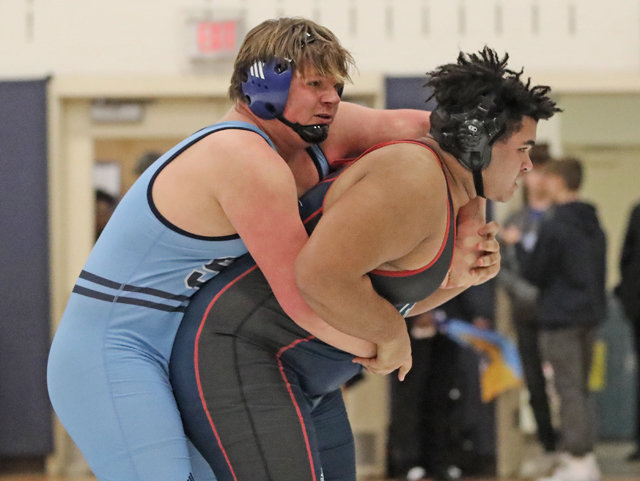 After Savage escaped from the bottom early in the second frame, Moore shot for a takedown but had it backfire as Savage countered and took the SCH man down instead. Savage parlayed this into a pin with a minute and 15 seconds remaining in the period.

Registering takedowns and near falls in the 182 lb. match, GA's Luke Duthie had built up a 12-1 lead in points over fellow junior Tyler Guzik as the second period was winding down. With 27 seconds left, Duthie ended it with a pin, putting his team up 21-6 in the meet score.

SCH recouped these last six team points when GA provided no opponent to face Blue Devils senior Will Neverosky in the 195 lb. class. The Patriots' lead in the meet tally soon rose back up to 15 points as their 220-pounder, junior Harrison Levans, pinned freshman rival Grant Guzik with 32 seconds remaining in the first period.

A pair of sophomores squared off at 285 lbs., where Mac Levin gave SCH its lone victory on the mat by pinning visitor Sean Spinosa with eight seconds to go in the opening round.

As the meet order swung around to the light end of the scale, Blue Devils sophomore Jack Sanderson accepted a Germantown Academy forfeit in the 106 lb. class. Although this brought Springside Chestnut Hill back within three points of the Pats in the meet score (24-27), the Devils would be forfeiting in four of the last five weight categories.

Wrestling took place only in the 126 lb. class, where GA senior Jibrael Moore had a 5-4 edge over freshman Tylor Stubbs at the end of the first round. After Moore escaped from the bottom at the beginning of the second period, SCH's Stubbs took him down to draw even in points at 6-6. The Patriot senior soon staged a reversal, though, and he picked up near fall points before getting a pin with 20 seconds to go.

The Blue Devils' four late forfeits were accepted by GA sophomore Jake Wezner (113 lbs.), senior standout Chris Kim (120), junior Christian Colman (132), and freshman Jacob Sasson (138). A week earlier against Malvern, Colman had scored most of the Patriots' team points by recording a pin in his match.