"The Revolutionists" argues quite a bit. It is the story of four women who dare to challenge the engulfing terror. 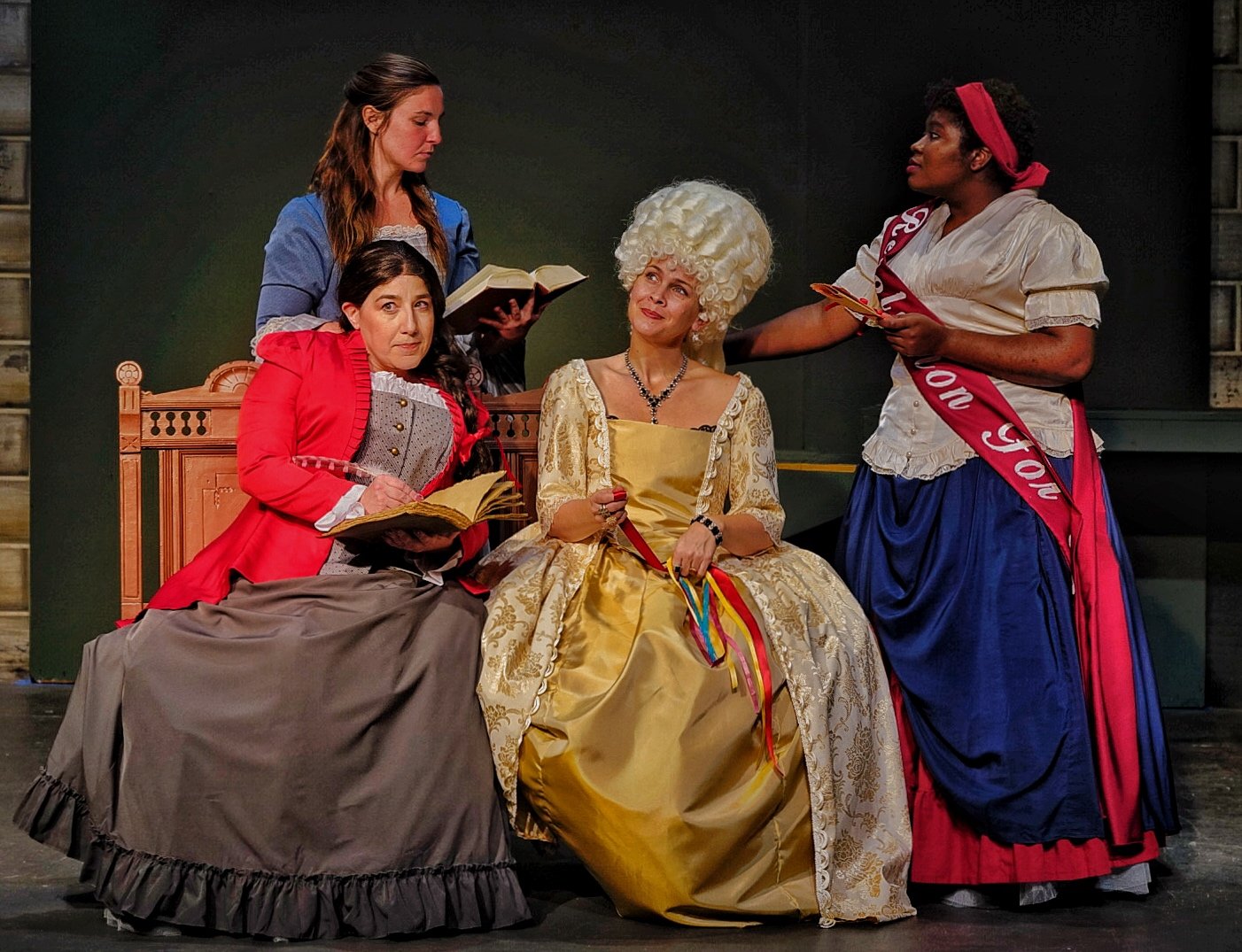 "The Revolutionists," by Lauren Gunderson, will hit the ground running at The Stagecrafters Theater on Friday, Nov. 26 (through Dec. 12). Set in 1793 Paris during the French Revolution’s Reign of Terror, this historical fantasy is a passionate, irreverent and often hilarious anthem for a quartet of female voices, who strive to quench the fanatical insanity of the male-run horror show that is engulfing them. Seen here, from left to right: Jen Allegra as Olympe de Gouges (seated); Rachel Dilliplane as Charlotte Corday (standing); Kathryn Wylde as Marie Antoinette (seated) and Sharese Salters as Marianne Angelle (standing). Photo by Joanne Davis 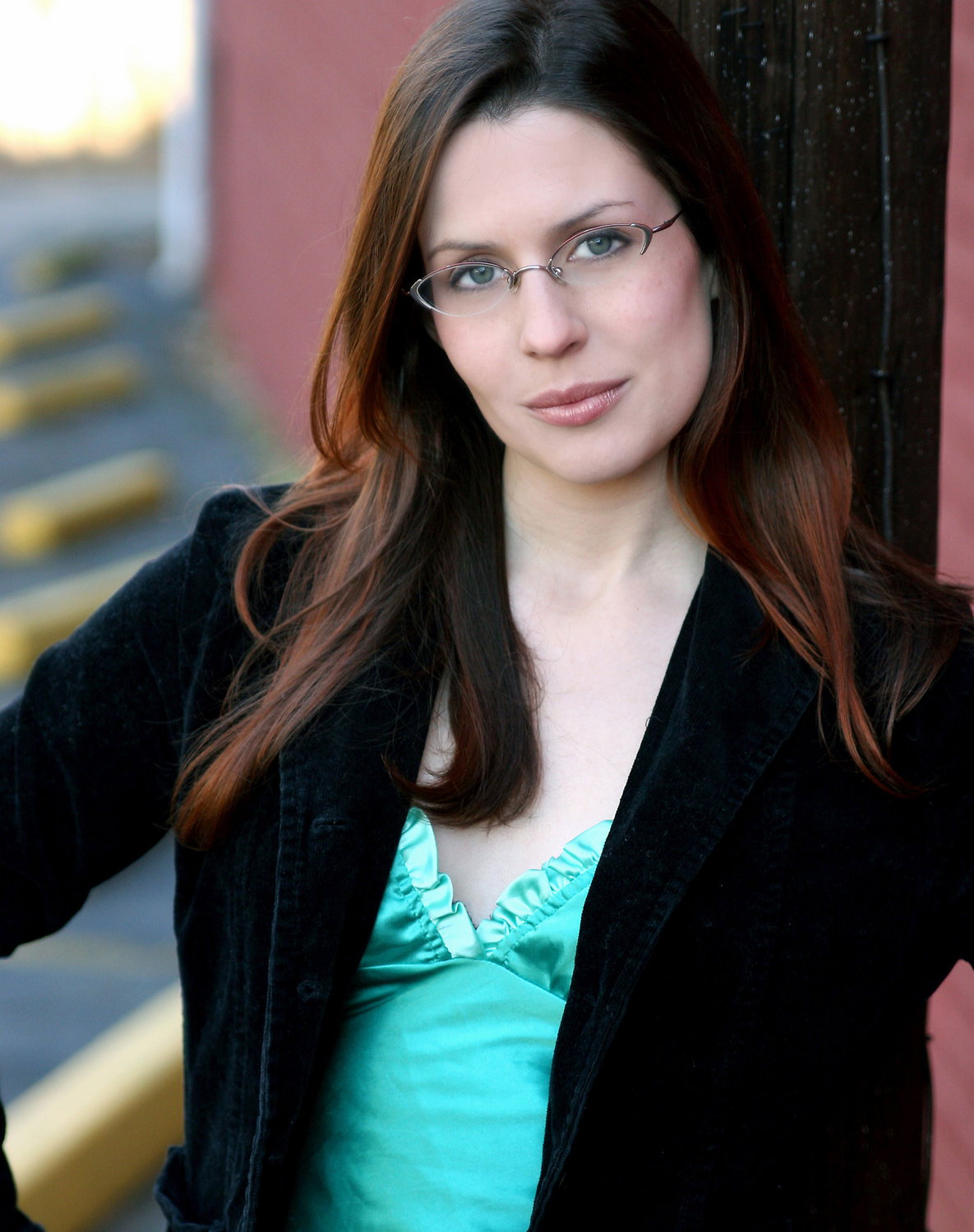 The plays of Lauren Gunderson, who wrote “The Revolutionists,” focus on female figures in history, science and literature.
Previous Next
Posted Thursday, December 2, 2021 6:00 am
by Hugh Hunter

The Stagecrafters' production of "The Revolutionists" by Lauren Gunderson grabs your attention before the show even starts. As you look at the semi-dark stage, you are struck by the thick, gray dungeon walls and the rear stairs that seem to lead to a sacrificial altar (set design and décor by Yaga Brady and Rick Stewart).

Yes, this is the French Revolution during the Reign of Terror. On the front of the stage you note period furniture such as a delicate writing desk with an ink pot and quill. You soon learn they belong to the writer, Olympe de Gouges. Surrounded by organized mob violence, what can anyone do?

"The Revolutionists" argues quite a bit. It is the story of four women who dare to challenge the engulfing terror. The central character is Olympe de Gouges, a prominent 18th century playwright who also wrote "The Declaration of the Rights of Woman and the Female Citizen" in 1791 and during the Reign of Terror was guillotined for her "crime" in 1793.

Two other characters in the play are also historical figures: deposed queen Marie Antoinette and Charlotte Corday, who assassinated one of the Revolution's leaders, Jean-Paul Marat, in his bathtub. Marianne Angelle is the only fictional character, a Haitian who wants to bring the true ideals of the French Revolution to her homeland’s slave plantation.

Since martyrdom is not especially a happy circumstance, it is surprising that "The Revolutionists" is so funny, so full of word play and witty dialogue. The four women share a feminist viewpoint but also live in separate worlds. They talk past each other in such a self-preoccupied way that they often needle each other without knowing it.

Costumes by Janet Gilmore and Susan Gibbons underscore Gunderson's comic touch. Wigged Marie Antoinette is wrapped in golden brocades from head to toe. Kathryn Wylde's ditzy queen is so delightful that at times she steals the show. Likewise, the deadpan anger of Rachel Dilliplane's Charlotte Corday is close to the comic invention of “Cabaret.”

Jen Allegra's Olympe de Gouges is more varied. She, too, is finely comic at times, but Olympe also has writer issues and is fearful of being killed. Marianne, unwavering in bravery, calls her out. There is little humor in Marianne, but somehow Sharese Salters gets you to like the indignant idealist.

In act two, the mood changes with the executions of the three martyrs. You are touched by their dignity. With the help of lighting (Gilbert Todd) and sound (Bill Bansbach), director Catherine Pappas stages moving scenes without recourse to melodrama. The four women have matured into a sorority of courageous activists.

Gunderson is an activist playwright. All night Olympe threatens to break the fourth wall with playful references to theater. At the end, she has an out-and-out Bertolt Brecht moment. The lights come on, and Olympe delivers a formal manifesto to the audience on the need for theater to confront injustice.

Stagecrafters is located at 8130 Germantown Ave. "The Revolutionists" will run through Dec. 12. Call 215-247-9913 for reservations. Proof of vaccination is required.

Chestnut Hill native Hugh Hunter has been reviewing community theater productions in Northwest Philadelphia for the Local for 17 years. Before that, he wrote 2,000+-word theater reviews for his own amusement and edification, not for newspapers.

Onstage for the holidays: shows and concerts
Live theatre returns, slowly and carefully