J. William Baxter of Glenside receives hugs from Barbara Sherf at Trader Joe's. by Barbara Sherf For those of you who missed my Dec. 8 article about using kindness as my form of activism and carrying … 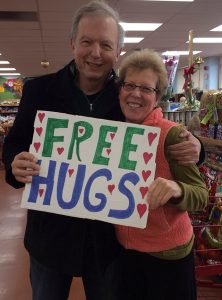 For those of you who missed my Dec. 8 article about using kindness as my form of activism and carrying a “free hugs” sign around wherever I go, let me share where the idea came from:

My therapist, Edie Weinstein, suggested this idea to me at one of our sessions.

Following the death of my father and the elections, I saw a clear need to get back into therapy, and I’m told that the mental health business is booming right now.

“I brought a group of friends to 30th Street Station for a Free Hugs Flash Mob,” said Weinstein, who had a heart attack in June, 2014. “Our intention was for people to remember that every day is a good one to express love. We walked around the train station for an hour or so and hugged a few hundred people between the 12 of us. Friends started calling us 'Hug Mobsters.'

“Shortly afterward, in the midst of cardiac rehab, I 'took it on the road,' so to speak, since walking was part of my recovery and I realized that hugs are heart-healthy, not just for the cardiac muscle, but for the common emotional heart we all share. Since then, I have done Free Hugs events in the Philly area, as well as D.C. I hugged people on Election Day and several times post-election. I have done them at parades, community gatherings, festivals and rallies, as well as nursing homes and in the Phoenix airport while waiting for a plane.”

I too keep my “Free Hugs” sign in the car, but one difference is that as I give and receive hugs, I whisper “Make America Kind Again.” Those four little words, placed on a button made by Mt. Airy artist Ellen Benson, have opened up arms and conversations.

At Harston Hall, a nursing home in Flourtown where my neighbor Ginny Ashenfelter is, the free hugs turned into a support group meeting with a half dozen mostly African American men. Bruce Nichols, 61, a permanent resident there, lost his mother around the same time I lost my father in October, so we have a special bond. “I think you’re on the right track with the hugs,” said Nichols.

I sat with him for a half hour or so and let him visit with our dog, Tucker, a sweet golden retriever whose age we guess is 12 and who I fear will pass over the Rainbow Bridge soon. “He’s a sweet boy. I love animals and hugs, so you pretty well made my day, my week, my life,” Nichols exclaimed.

I then proceeded to hug another two dozen patients and staff members within the facility and enjoyed a visit with Mrs. Ashenfelter, former owner of The Happy Butterfly store in Chestnut Hill. “Thank you for the hug, and thank you for coming,” said Ashenfelter, noting that she had few visitors and would welcome visits from area residents who knew her. “People say they’ll get in to visit, but they don’t. Everyone’s too busy. We need more hugs.”

I received a free hug from a Muslim African American woman I’ll call Mina who did not want to be identified for security reasons. “I have no fear,” she said. “It’s all in God’s hands. People don’t understand how we are all interconnected in this universe. People should learn to treat each other with kindness and respect more, and your idea of the ‘free hugs’ sign just kind of put it in their face.”

She shared with me that the issue of racism is not new and that the idea of Donald Trump in the White House is something she has come to accept. “We’ve fought the fight before, and still there is evil among us. There is greed and superiority and sexism added to the mix, and it is painful at times to watch … I’ve learned to love people, even the ugly side, and also take pity on them ... I won’t walk in fear.”

As I sat in the meeting room at St. Paul’s Episcopal Church before my “A Course on Love” book discussion group, a man from Tibet, Sonam Kun Tso, saw my sign, and we exchanged hugs and ideas. I had seen this landscaper/handyman on several occasions but never connected with him until he saw the sign.

My “Free Hugs” sign is getting a bit tattered since I hugged 100 seniors at a Holiday Concert at the Center on the Hill in the Presbyterian Church of Chestnut Hill last Thursday. Geneva Ashworth of Mt. Airy was there and initially didn’t recognize me as I was giving out free hugs at the Trader Joe’s in Abington the following day. “I just received a hug yesterday, but I’ll take another,” said Ashworth.

Over the weekend I hit the Flourtown Giant, Dollar Store, Hallmark store and even the Planet Fitness gym. “Oh I’m too sweaty,” said Jane Prosser of Lafayette Hill. “I am too; let’s hug,” I responded, and we did hug.

Flourtown resident Barbara Sherf can be reached at 215-990-9317, or visit her blog at CommunicationsPro.com. She is looking to sit down and have a conversation with a Trump supporter to better understand her fellow humans.