In 2002, Friends of the Wissahickon was one of the first organizations to sign the Treaty of Renewed Friendship drawn up by the Lenape Nation of Pennsylvania. Today the Lenape Nation meets with their partners every four years all along the river and takes the Friendship Treaty with them. The next journey will take place in 2022. 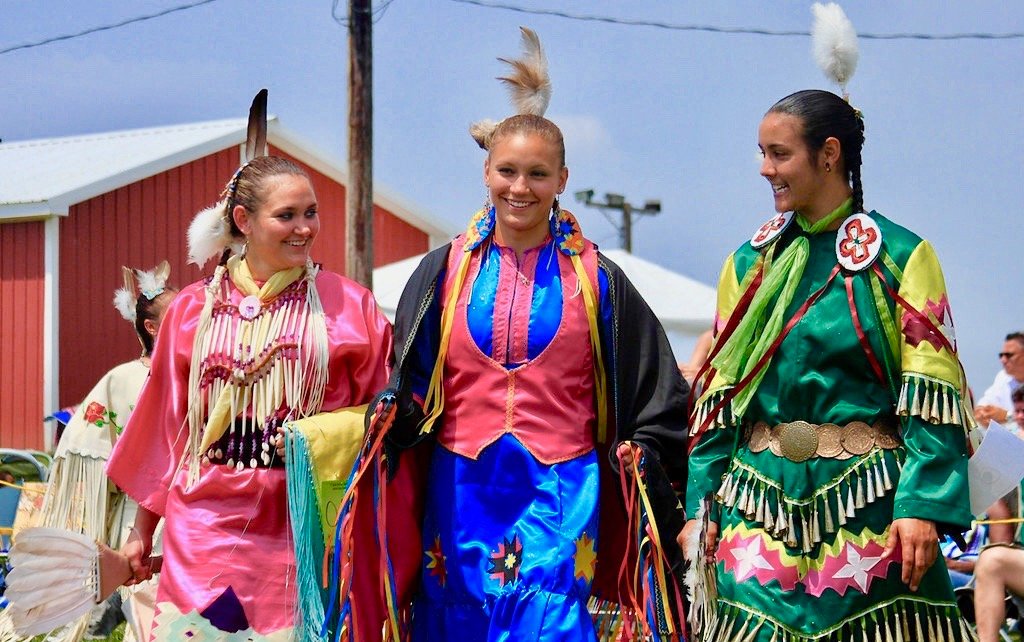 A group of Indigenous Nantikoke Lenni Lenape women seen at a recent Pow-Wow. 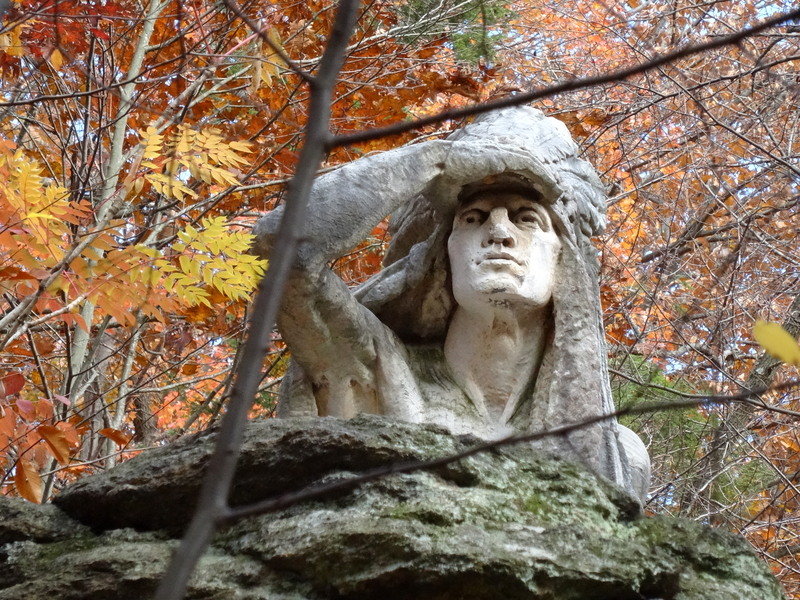 The iconic 15-foot marble statue of Tedyuscung, of the Lenape Nation, was commissioned in 1902 by Mr. and Mrs. Charles W. Henry to replace an earlier version that had deteriorated. It is located on Council Rock, where the Lenape held their meetings overlooking Wissahickon Creek. 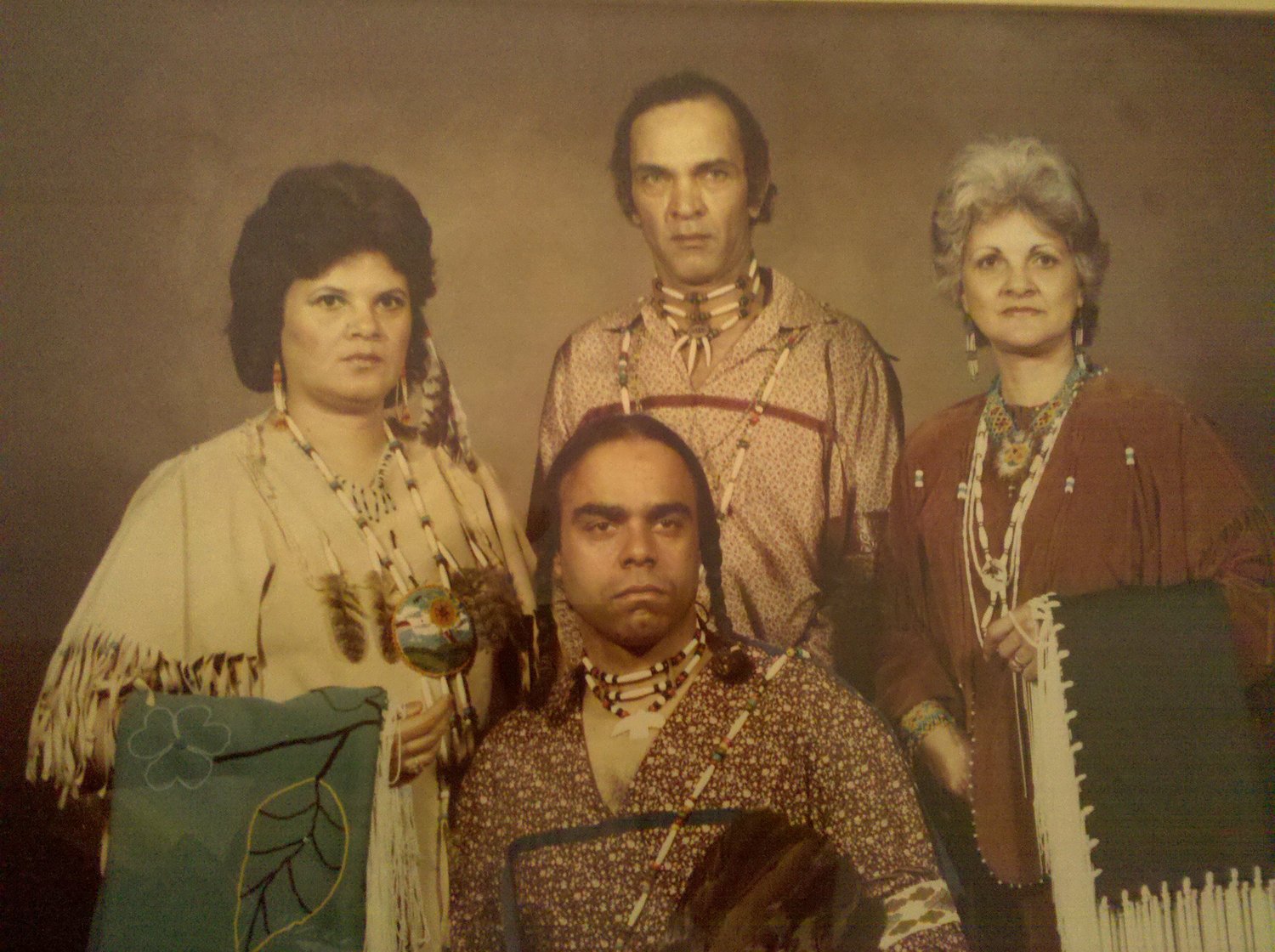 A group of Lenni Lenape Native Americans from the Philadelphia area, pictured about 75 years ago
Previous Next
Posted Wednesday, November 17, 2021 6:00 am
by Elspeth Lodge

This article is in honor of the recent Indigenous People's Day (Columbus Day) and Thanksgiving. According to many historians, soon after William Penn (1644-1718) arrived in Pennsylvania in late October of 1682, he met with Lenni Lenape Indians in the riverside town of Shackamaxon (present-day Fishtown). There, beneath a majestic elm, they exchanged promises of perpetual friendship.

Friends of the Wissahickon was one of the first organizations to sign the Treaty of Renewed Friendship drawn up by the Lenape Nation of Pennsylvania.

In 2002. FOW was one of the first organizations to sign the Treaty of Renewed Friendship drawn up by the Lenape Nation of Pennsylvania, a nonprofit with the goal of keeping the history and culture of the Lenape people alive. The treaty, now signed every four years, was originally a response to pollution of the Delaware River. It was meant to connect organizations and individuals who wished to help address the issue, recognize the Lenape as caretakers of their ancestral land and to keep the group’s culture alive.

In October, 2020, more than 350 people attended FOW's Virtual Valley Talk, “The Past and Present of the Lenape in Pennsylvania.” Featuring council members of the Lenape Nation of Pennsylvania, the conversation revealed a special interest in language, laying the groundwork for another Valley Talk that took place on Sept. 14, “Lenape, A Living Language.”

Ruffian Tittmann, FOW Executive Director, was on the Zoom stage with Shelley DePaul, Chief of Education and Language for the council for the Lenape Nation of Pennsylvania. She is credited by Penn Museum as being one of the few people in the world to speak Lenape, an almost extinct language, proficiently. DePaul believes that if you study a culture, you need some of the language, because it’s an artifact; “It can’t be changed; it can’t be messed with, and it tells you a lot.”

Though currently based in the Poconos, DePaul has been teaching the Lenape language far and wide during the pandemic via Zoom, and to talk at events like the one with FOW. In Pennsylvania, she said, the story reaches back to the 1600s, before two removals that took place in the late 1700s and early 1800s, forcing the group westward. “The Lenape removal isn’t the 'Trail of Tears,'” she said. “That’s actually the Cherokee people, but we had the same sort of situation.”

On their way west, some groups stopped at different points like the “beautiful and remote” Allegheny Mountains, where there are still Lenape communities. Additionally, there are now Lenape in western PA, Ohio, Indiana, Oklahoma, New Jersey and Canada.

Many German settlers, mainly farmers, traveled through Philadelphia and moved to the frontier, areas like the Poconos, where DePaul spoke from. Lenape women were attractive to marry due to their knowledge of the land and of herbal medicines. The two cultures got along well, and they spoke each other’s languages. There is evidence through their oral histories but also “little gems” like a story about a German farmer and a Lenape Indian in a diary that she found when “skirting” the University of Pennsylvania archives.

“A lot of textbooks are going to say there are no Lenape left in Pennsylvania, and this is where we like to correct that history,” said DePaul, “and explain that there are many Lenape families that started way back then.” Of course, she added, they had to assimilate, as it just wasn’t “wise” to practice their religions and culture.

Questions were brought up about religious tolerance in Pennsylvania. DePaul said that William Penn was very respectful and close to the Lenape people. “We have letters that he wrote to our people, very loving, very friendly letters,” she said. “He was only here for a year or so and then went back to England. After he passed away, his sons took over and were not at all friendly with the Lenape people.”

An exhibit that was originally at the University of Pennsylvania for three years tells the story of the Lenape in Pennsylvania. It follows an old prophecy of the four crows, said DePaul. “Our Chief, Chief Bob, interprets this story to me as the four times of the Lenape. Four crows will come: the first crow flew in harmony with the creator [pre-colonial contact].

“The second crow got sick and died [during contact when Lenape lost culture, home, land, etc.]; the third crow saw what happened to his brother and went into hiding. The Lenape that remained in PA secretly passed on traditions, and the fourth crow came out and lived in harmony with the creator again [where the Lenape Nation of Pennsylvania considers themselves now].”

Today the Lenape Nation meets with their partners every four years all along the river and takes the Friendship Treaty with them. The next journey will take place in 2022.

More than 50 organizations and hundreds of individuals have signed the treaty, “so it keeps on growing,” said DePaul. The Lenape have started to form relationships with “so many wonderful individuals, churches, conservancies and organizations such as FOW.”