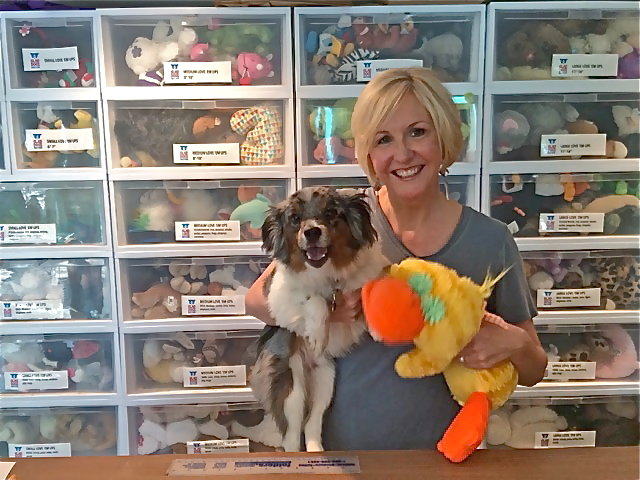 Marianne Ahern is seen with Rufus, one of her four rescue dogs, in the workshop at her home. (Photo by Barbara Sherf)

Former Mt. Airy resident Marianne Ahern has come up with a creative way to raise money for spay and neuter programs at animal shelters by turning used stuffed animals into squeaker toys for your furry friends.

Ahern, 60, who now lives with her husband in Bucks County, started Glad Dogs Nation in 2012. Her Glad Dogs story began in 1990 as she was driving in Lambertville, New Jersey, when she saw a tiny dog running down a busy road late one night. She made a U-turn and was one of several drivers who stopped to coax the scared dog out from under a car.

“The next thing I remember is a man holding up the dog and saying 'Who wants her?' I heard myself saying, 'I do.' I brought her home and learned she was a five-pound toy poodle. I could never find her family, so she became my first rescue. I named her Gracie,” Ahern said while touring her workshop. Since 2004, she and her husband have fostered 120 dogs and came up with the idea for Glad Dogs Nation to save even more.

“We would often pick up used stuffed animals at yard sales. I would make sure the nose or hard eyes were removed and let the dogs have at it,” she said. “Then I started experimenting and added a squeaker inside the toys and hand-sewed a red scar on the belly to drive home the need to spay and neuter animals.”

Marianne's product line recently made its way into the Weaver’s Way Across the Way store in Mt. Airy. “We think this will appeal to a customer who is both sensitive to the environment with the need to reuse items and will attract pet lovers as 100 percent of the profits support adopt and spay/neuter programs,” said Ahern while filling up the bin at the Carpenter Lane Weavers Way. The toys range in price from $3 for a former Beanie Baby to $10 for a 15-inch animal.

A Philadelphia native, Marianne moved from center city to Mt. Airy in 1982 after a divorce because “I loved the diversity. I also enjoyed the proximity to center city, where I worked, and Chestnut Hill. I really didn’t dislike anything.”

They left in 1987, according to Marianne, “ONLY because I got a job in Princeton. After commuting 1.25 hours each way every day for six months, I was worn out from it. My husband is not a city person, or I would have considered moving back to Mt. Airy.”

(Marianne's son, Gary, was in Sports Illustrated’s “Faces in the Crowd” feature in 1987 because he struck out an astonishing 26 batters in 11 innings in the Chestnut Hill Fathers Club League.)

Marianne, who has had a 40-year career as a marketing writer/creative director, started as a copywriter and became a creative director of a national marketing company based in Princeton with satellite offices in several major U.S. cities. She still works as a marketing consultant, producing marketing materials, direct mail, websites and more, but she has also been a commercial actor for 20 years. Marianne has been in a handful of local TV spots and is currently an on-air guest on QVC, representing products in the fashion accessories area. She is also a voice-over artist, doing radio spots as well as corporate training voice-over work.

For Glad Dogs Nation, Ahern has a growing list of volunteers, like herself, who will spend their evenings watching TV while taking beans out of Beanie Babies or stitching up the belly of a stuffed animal. Her husband of 17 years, Layne Brown, painstakingly uses a chopstick to push the Beanie Baby arms back out and readies them for stuffing and a squeaker.

Ahern is looking for sponsors and donors to help secure a production facility with storage and a commercial washer and dryer. She has also introduced the toys to Opportunity Knocks in East Falls and has a vision of taking the product into retail nationwide.

Currently, GDN does sell nationwide through its web site. “We have a link to a list of products we are seeking on Amazon.com to send to pet shelters in West Virginia, Tennessee and even out west where pet owners are having difficulty because of forest fires.”

If you would like to make a purchase, volunteer or make a donation, go to www.gladdogsnation.org or follow them at www.facebook.com/gladdogsnation. When not giving out free hugs and telling stories, Flourtown resident Barbara Sherf enjoys walking and chilling with her Golden Retriever rescue, Tucker.