The courtyard at Blue Comet is a pleasant place to dine in spring-like weather. (Photo by Judy Rubin) by Judy Rubin When I called The Blue Comet Bar and Grill, 106 S. Easton Rd. in Glenside, to set … 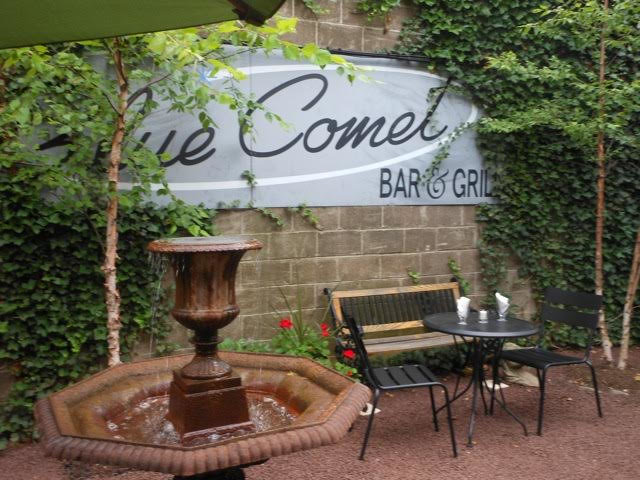 The courtyard at Blue Comet is a pleasant place to dine in spring-like weather. (Photo by Judy Rubin)

When I called The Blue Comet Bar and Grill, 106 S. Easton Rd. in Glenside, to set up an interview with the owner, he called back and suggested I eat there first, then come for the grand tour and chat. Scott, the owner (he asked us not to use his last name), said, “You dig it or you don’t!”

The Blue Comet is named after the passenger train operated by the Central Railroad of New Jersey from 1929 to 1941. It has been owned and operated by this owner for 20 years, who sold his first restaurant, The Fairlane Grill in Erdenheim, two years after he opened The Blue Comet. He realized that he couldn’t manage two places at once.

It is a comfortable, attractive neighborhood establishment that brings in an eclectic mix of people, all ages. It has young, enthusiastic servers and an outside courtyard that the owner opened to the public five years ago. You can dine at tables surrounding the fountain that the owner installed himself. No children are allowed in the fountain area.

The anonymous owner prides himself on the fact that “I have a better record than E-Harmony or Match.Com. Between 70 -80 couples met here and married. They bring me a bottle of wine or cigars when they have babies.”

When I walked in, I was immediately taken by the cleanliness, attention to detail and wide booths. Old black and white films are on the TV screen. It is not a sports bar. Big band music and songs from the '20s to the '70s play, not loud. Vintage Americana displays adorn the walls and shelves.

Between 5 and 7 a.m., he gets in his 1991 open jeep, (parked in back of the courtyard) scouts around flea markets and picks out “older, nice things Americana that make my heart skip a beat,” and he cleans the restaurant himself after everyone else is gone. “I have no problem drinking my morning coffee in the mens’ bathroom after I clean it and put the fresh flowers in.” 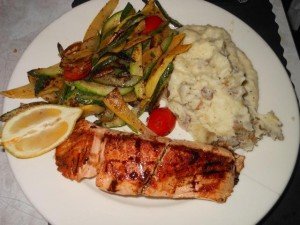 The balsamic glazed salmon with ranch mashed potatoes and zucchini/squash/tomato medley at the Blue Comet in Glenside.

When we were seated at our comfortable booth (designed and built by the anonymous owner), Liz, our engaging and attentive server, handed us the leatherette menu that listed the standard fare — homemade soups, mussels, clams, salads and burgers. A complimentary relish tray and rolls come with the meal. A paper insert lists the week’s specials.

My husband and I shared a huge appetizer of melt-in-your-mouth fried calamari with a dreamy homemade marinara sauce. The sweet Maryland crab soup was light, delicious and not over-salted. The owner makes two soups a day. My grilled salmon w/ a balsamic reduction was moist and delectable, and the accompaniments of mashed potatoes and zucchini/squash w/cherry tomatoes were satisfying. Other entree choices were rack of lamb, filet mignon, fried jumbo shrimp and Cajun-seasoned swordfish. Every Wednesday is lobster night. Paper bibs, folks! Fresh lobster and trimmings for $19.95. Entrees run around $25, appetizers $10.

No desserts are on the menu because the kitchen is too small to make and store them. The owner's black and white cat, Jake (we are also not using his last name), “greets customers and does inventory. The owner pointed out an 1863 chromeo lithograph print of the famous John Gilbert Stuart portrait of George Washington that he had purchased.

The basement is covered wall to wall with memorabilia, neatly stacked, and is set up like a cozy room in an old farm house. An old bank vault houses dry storage, and a small broom closet is artfully decorated so that “people who clean don’t have to look at an ugly closet.”

The Blue Comet has no Happy Hour and “no signs to lure people in.” There are no take-out orders over the phone. “We take care of the people who are here,” said the owner. We arrived at 5 p.m. on a recent Friday, and when we left, there was a line of customers waiting to be seated.

Hundreds of Springfield teens turn up for Covid vaccination clinic

Donate now to CH Local
The Latest
Hundreds of Springfield teens turn up for Covid vaccination clinic
More than 575 Springfield Township students age 12 and older were vaccinated against Covid-19 at a free clinic Thursday in partnership with Keystone Hospice.  Keystone’s Shane Kolt, Sr. …

“Selma” a remarkably resonant, revealing and rewarding historical film
The bravura biopic, “Selma,” is about more than one man; it’s about a community.

Henri Matisse, a dollar, a postcard, and a custody trail
I drove home thinking how wonderful it was to own a card once held by the immortal Henri Matisse – one on which he had warmly inscribed thanks to a person who had contributed, even in such a humble way, to making his dream come true. I vowed to always cherish it.
Preventing gun violence in our city—a group effort
There are likely as many unreported efforts to prevent gun violence in our city as there are reported incidents of gun-related crimes.