A passionate dog lover who has 14 dogs of her own, former Chestnut Hill College student Lois Pope’s foundations have contributed significantly to animal rescue efforts and numerous other … 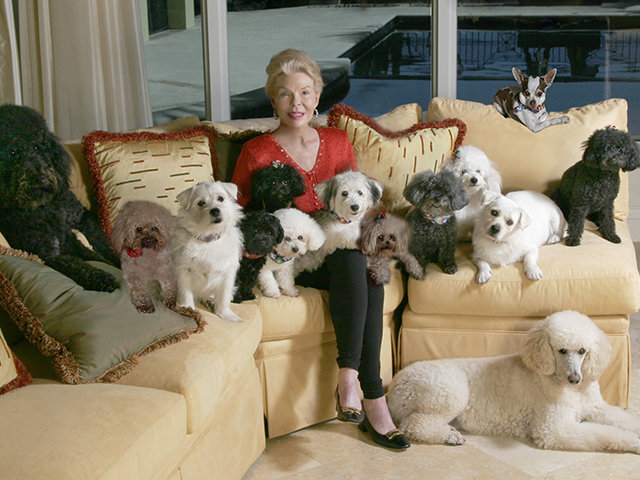 A passionate dog lover who has 14 dogs of her own, former Chestnut Hill College student Lois Pope’s foundations have contributed significantly to animal rescue efforts and numerous other charities.[/caption]

Lois Berrodin, who grew up in Cheltenham, was just another student at Chestnut Hill College (CHC) in the early 1950s who, like so many other college students before and since, was not sure what career path she wanted to follow. After only about a year and a half at CHC, however, where she soloed with the glee club and sang in operettas, Lois, who is now 83, walked out on the high wire without a net, moving to New York City, staying at the Salvation Army and literally not knowing where her next meal would come from.

Of course, every year countless thousands of young men and women move to New York with dreams of stardom in one aspect of show business or another. Probably 99 percent never quite fulfill those dreams, but Lois had undeniable talent and beauty. Thus, after auditioning for a role in “Oklahoma,” one of the all-time classic American musicals, Lois beat out hundreds of other hopefuls to become the understudy to Florence Henderson, the female lead. (Lois became “Lois O’Brien” because Berrodin was apparently tough for critics and playbill writers to spell.)

Lois later toured with “Oklahoma” and appeared in other Broadway musicals. As a result of her stardom, in the mid-1960s she was asked to perform for Vietnam veterans at New York’s Rusk Rehabilitation Center. It turned out to be a very atypical performance when Lois gazed out into the audience and saw “men without eyes, with holes where their ears and noses should have been, on crutches, with horrific burns, etc. I said, ‘God, please help me get through this without crying.’”

The pianist started to play “Somewhere” from “West Side Story.” When she sang the words, “Hold my hand, and I’ll take you there," Lois reached her hand out to a young soldier on a gurney, but she clearly recalls more than 50 years later that “he did not have a hand!

“That changed my life forever. I decided then and there that if I could ever do anything for these brave men, I would do it! But I did not know how that would happen because I was just a struggling artist. I had no money.”

Fate would play a starring role in Lois’ life, however. She married a William Morris talent agent named George Wood in 1959 and put her show business career on the shelf. After they became the parents of two children, Wood died in 1963. Lois then married Generoso Pope in 1965, who happened to be the founder of the notorious celebrity gossip publication, The National Enquirer. (Author’s note: I worked briefly for Mr. Pope in 1982 at the National Enquirer’s home office in Lantana, Florida. He had purchased the New York Enquirer in 1952 for $75,000 and transformed it into The National Enquirer.) They had two children.

Generoso Pope died at age 61 in 1988, whereupon Lois sold the paper for a widely reported $412.5 million. (That’s not a misprint.) Needless to say, the woman who was staying at the Salvation Army after leaving Chestnut Hill College was now able to keep the promise she made to herself in the mid-1960s — to help disabled veterans.

In the mid-1990s Lois took a trip to visit the Vietnam War Memorial in Washington, D.C., where she wound up standing next to a vet in a wheelchair who was trying to place a bouquet of flowers next to the spot where his late buddy’s name was etched on the wall. “I looked into his eyes,” said Lois, “and my mind flashed back to the time many years before when I made that promise to the vets. I asked a guard where was the memorial for all disabled American vets, and he said there wasn’t one. That’s when I decided to get one built.”

It took almost 20 years, not to mention countless phone calls, relentless prodding of the Department of Veterans Affairs and Lois’ $10 million donation as the major contribution, but the American Veterans Disabled for Life Memorial was dedicated, with President Obama present, in the nation’s capital on Oct. 5, 2014.

Pope was also the executive producer of “The V.A., The Human Cost of War,” a documentary by Ric Burns (brother of legendary documentarian Ken Burns), which was screened at The Constitution Center in center city on March 31 of this year.

For her good works, in 1998 Chestnut Hill College presented Pope with an Honorary Doctor of Laws Degree. She was also given an honorary doctor of humane letters degree from the Rabbinical College of America.

We do not have the space here to mention every other one of Pope’s philanthropic efforts, but here are just a few: She established the Lois Pope LIFE Foundation and the Lois Pope LIFE Center, a neurological research facility that originated from Pope’s contribution of $10 million to the University of Miami Miller School of Medicine. (Pope now lives in Florida.)

Pope’s organizations have sponsored a clean-water project in Guatemala, summer camp grants for disadvantaged youths, the Community of Sudanese & American Women/Men, which helped those who have been displaced by war to come to the U.S. and start new lives, etc.

Also a passionate dog lover who has 14 dogs of her own, her Lois Pope Life Foundation funded the purchase of a new mobile pet adoption unit for the Peggy Adams Animal Rescue League, which has facilitated numerous adoptions of cats and dogs in Palm Beach County.

In 2005 Pope became a charter member of the Libris Society, which was formed to recognize graduates of Chestnut Hill College who have distinguished themselves in their personal and professional lives.

“What do we owe our veterans?” Pope asked rhetorically during her recent Philly visit. “We owe them everything. If it wasn’t for them, we would not have our freedoms and our American way of life. I am not finished because a lot of the vets are still not getting adequate care in VA hospitals. The VA is a bureaucracy from hell!

“Twenty-two vets commit suicide everyday! Some vets wait many months before they can even see a doctor. Until I take my final breath, I am going to devote my life to our 4.3 million disabled vets who are vulnerable and voiceless!”