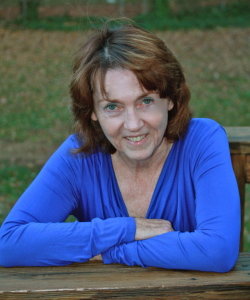 by Lou Mancinelli and Len Lear

Pat J. Devlin, 64, grew up in Flourtown on West Wissahickon Avenue and spent as much time as she could in and around Wissahickon Creek. In addition, her family lived just down the road from Erdenheim Farm, and she loved to walk just outside the fences, looking at the animals and staring at the fields.

Pat always wrote stories and dreamed of a career as a writer, but she also valued independence (“I am woman; hear me roar”), so instead she studied economics at LaSalle University. Upon graduation, she moved to the D.C. area while she studied for a Ph.D in economics at American University.

Pat's husband, John Devlin, grew up in Germantown and Roslyn. Like her, his family has longstanding ties to Chestnut Hill. In fact, both families lived on Benezet Street in the early 20th century. After they married, however, they remained in Northern Virginia, where they pursued careers and raised a family.

“I never lost my dream of writing fiction, though,” Pat told us last week. Last month, Pat published her first novel, “Wissahickon Souls, A Wissahickon Creek Story,” a historical novel set around the Wissahickon Creek in the years 1806 to 1836. The novel follows the central character, Claire Penniman, who was black and born free in Germantown to free parents.

“In my research,” Pat said, “I discovered that the population of free blacks, working people, in Philadelphia during the antebellum period has been almost invisible in history and literature. I also learned that some families, both white and black, indentured their children for a number of reasons — to ensure them food and shelter; to teach them a craft; to get them out of the city and the Yellow Fever; and in the case of some black families, to give them a way to learn to read and write since school options were extremely limited for black children. These factors weighed heavy in my development of a plot.”

“Wissahickon Souls” is a story of love, regret and reconciliation. Claire Penniman is indentured to Wissahickon Farm at the age of 6 in order to receive an education. Claire is an unlikely but highly likable heroine, and the reader joins her on her journey toward adulthood against the alternating backdrops of Philadelphia, a rural farm, and Haiti as each location becomes almost another character in the story.

Claire’s story fills a gap in American memory that marginalizes 19th century African American lives. Though Claire’s world defines a person by the color of his or her skin, Claire’s destiny is to bear witness to the truth that illuminates the color of souls.

In beautifully crafted language, Devlin takes an already tense situation and gives it an added element of the emotional when Claire becomes pregnant; Lawrence, the father, is the son of her indentured holder. Lawrence and Claire flee to Haiti and find work on an orange plantation. While there, Lawrence, a white man, feels disregarded in a country of free blacks. 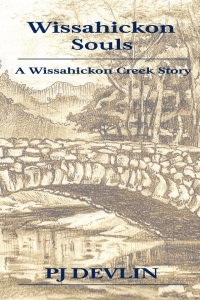 Their life in Haiti becomes tenuous, colored with hard labor under a sweltering sun for little pay. Eventually, Claire’s longing takes her to the sea, a lover and regret. When she returns to Philadelphia, she finds a city embroiled in racial turmoil. Amidst the turmoil, though, Claire is at home among the lush fields of Germantown Farm or at peace by the creek in the Wissahickon.

Pat Devlin launched her writing career at a time when many are preparing to retire. She always knew she was a good writer and that she had stories to tell. After working for more than 30 years in the finance industry, at last, in 2008, at 58, she enrolled in the Master's of Fine Arts in creative writing program at George Mason University (GMU), in Fairfax, Virginia. She had worked for 28 years for the Fairfax County, Fire and Rescue Department, ultimately becoming its chief financial manager.

Devlin said she always knew she would go back to school to study writing. She had been writing budget documents, speeches, testimony and other pieces her entire work career, but she wanted to focus on the craft and skill found in fiction.

“Wissahickon Souls” grew out of her MFA thesis. Pat's short stories were previously published in print and online. Her story, “Decline and Fall,” was a runner-up in the Saturday Evening Post 2013 Great American Fiction contest.

When it came to publishing her work, Devlin knew she did not want to deal with the possible melee of traditional publishing houses. She joked that she'd be waiting until she was 80 to be published. Last year she met the CEO of Possibilities Publications at a book festival at GMU. Nearly one year after she met the CEO, “Wissahickon Souls” was published.

A “Meet the Author” event is scheduled for Pat Devlin on Saturday, Oct. 18, 4 to 6 p.m. (a reading at 5 p.m.), at Magarity Tennis Club, 2nd floor, 825 Bethlehem Pike, Flourtown. Books will be available for sale and signing. “Wissahickon Souls” is available through Amazon.com, Nook, iBooks and other ebook retailers. More information at pjdevlin@zoho.com or meredith@possibilitiespublishingcompany.com.