Log in
This is a developing story. This article was last updated 1:30 p.m. Wednesday.

The fire was first reported at 3:07 a.m. on Tuesday morning and was under control by 6:12 a.m. Firefighters had to return later that evening when a corner of the building re-ignited, and remained on site until about 3 a.m. Wednesday.

This is a developing story. This article was last updated 1:30 p.m. Wednesday. 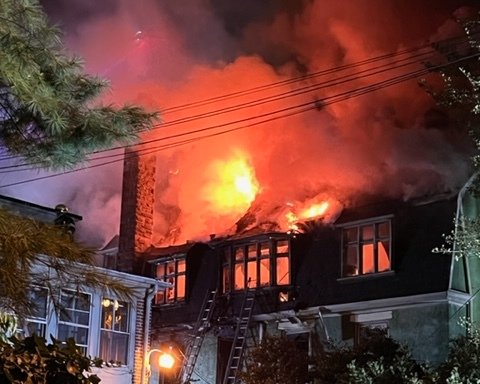 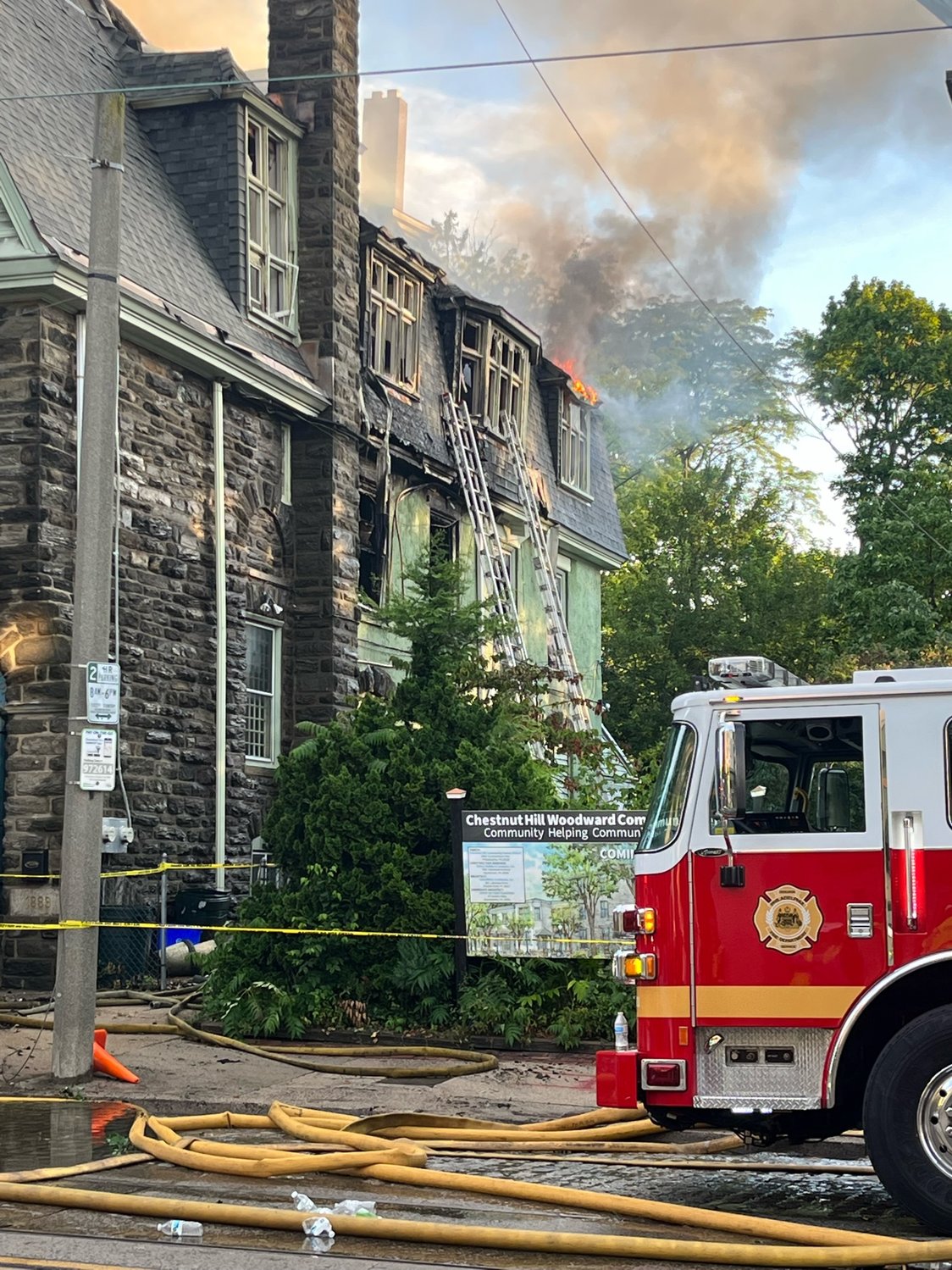 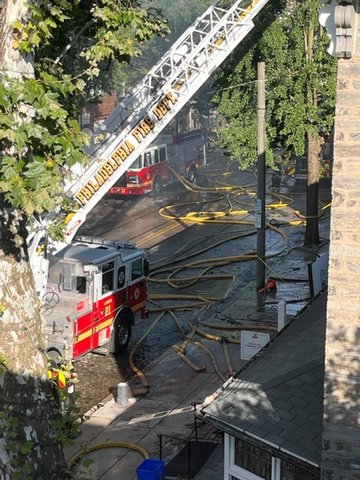 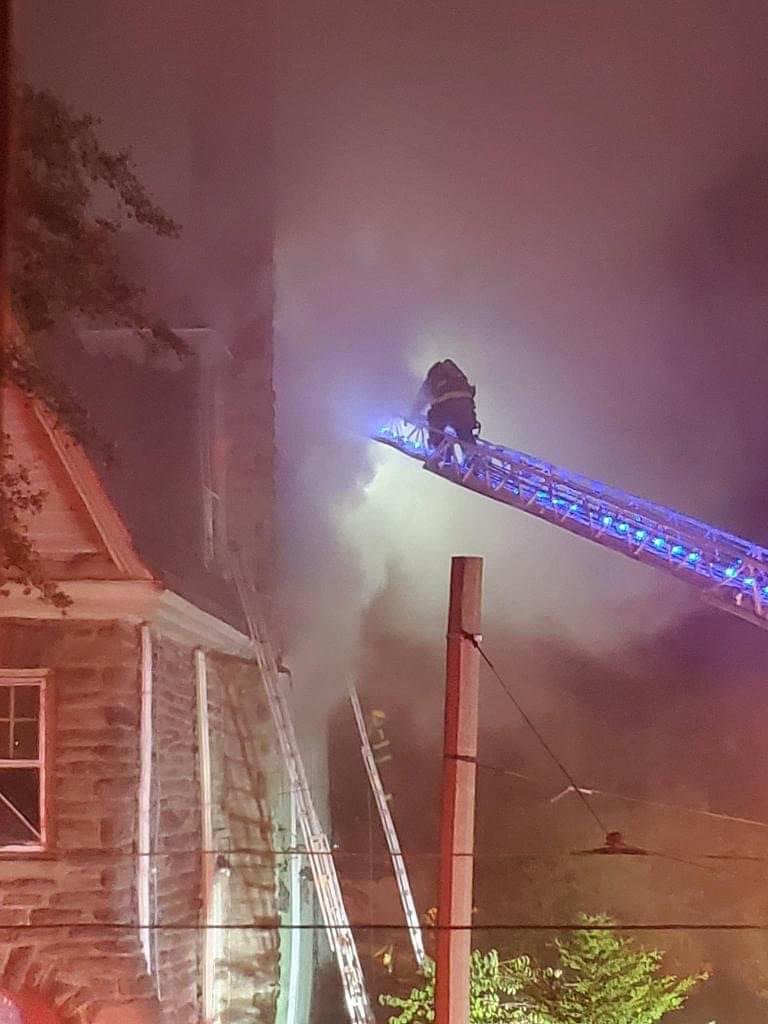 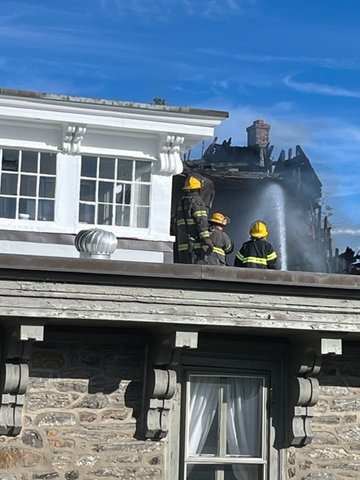 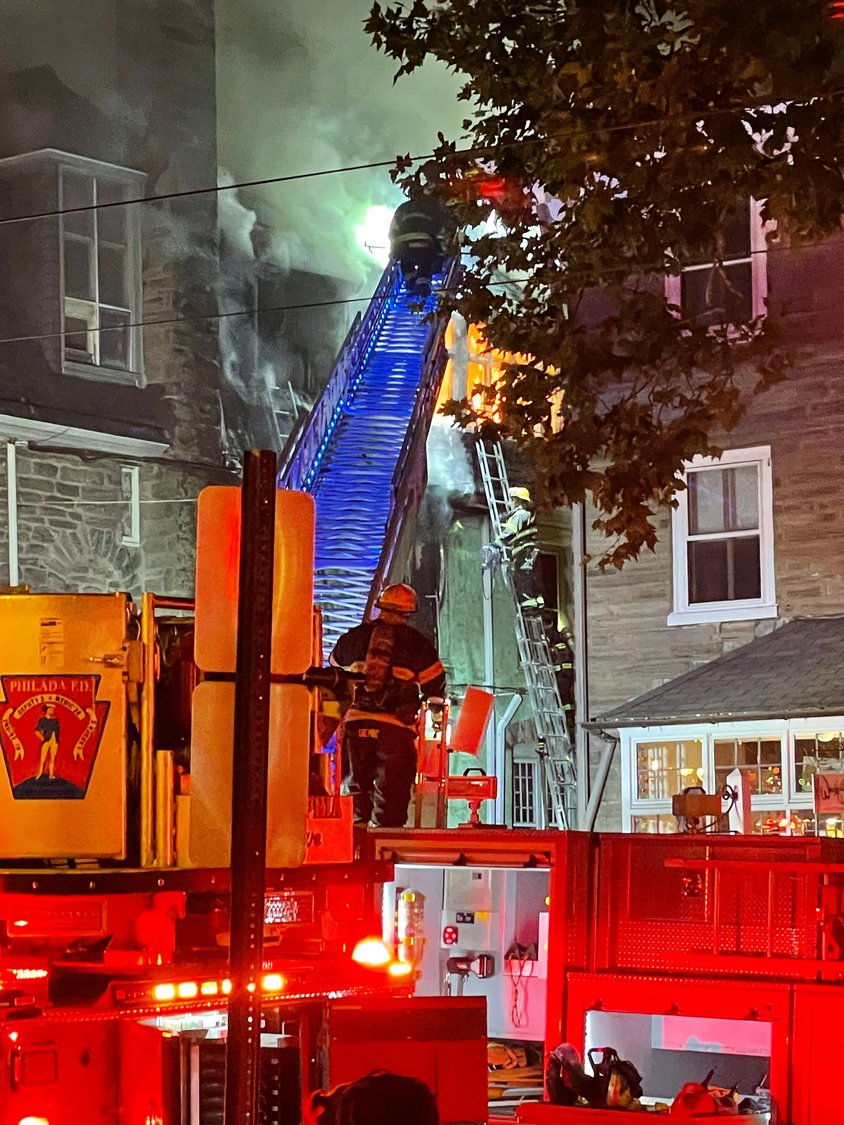 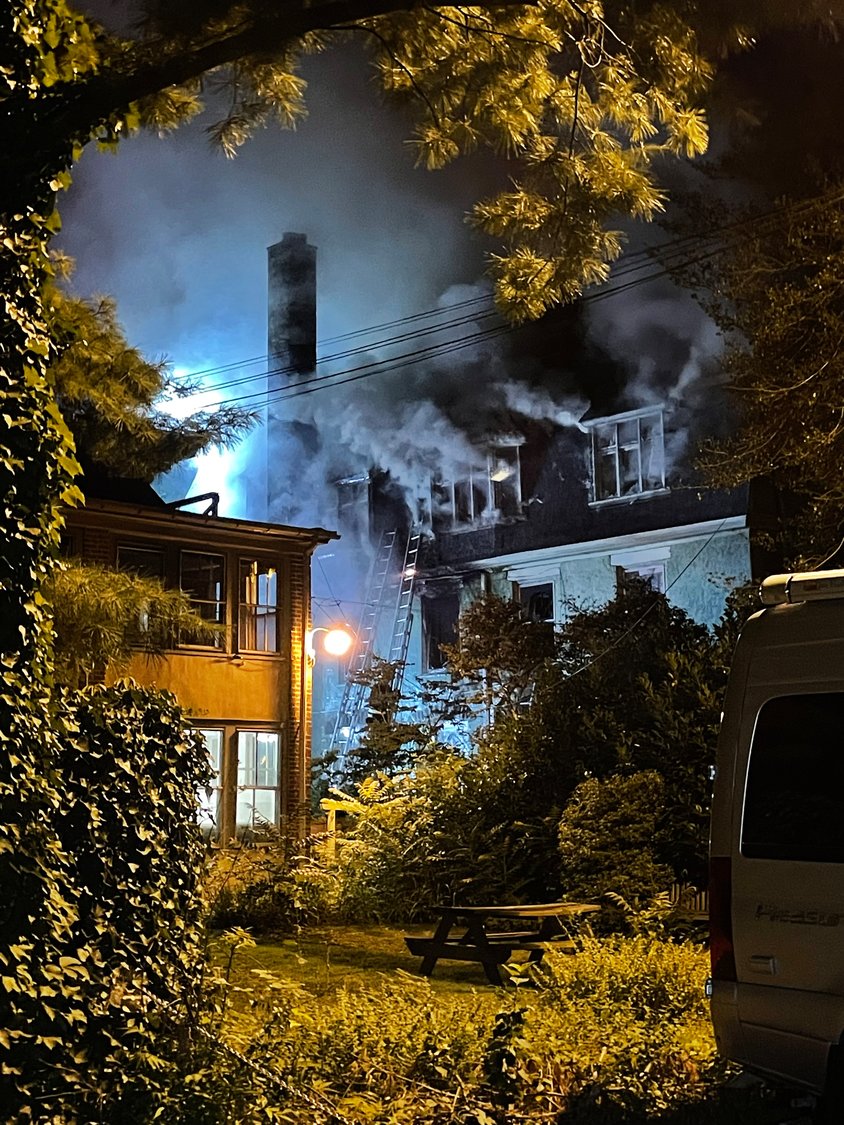 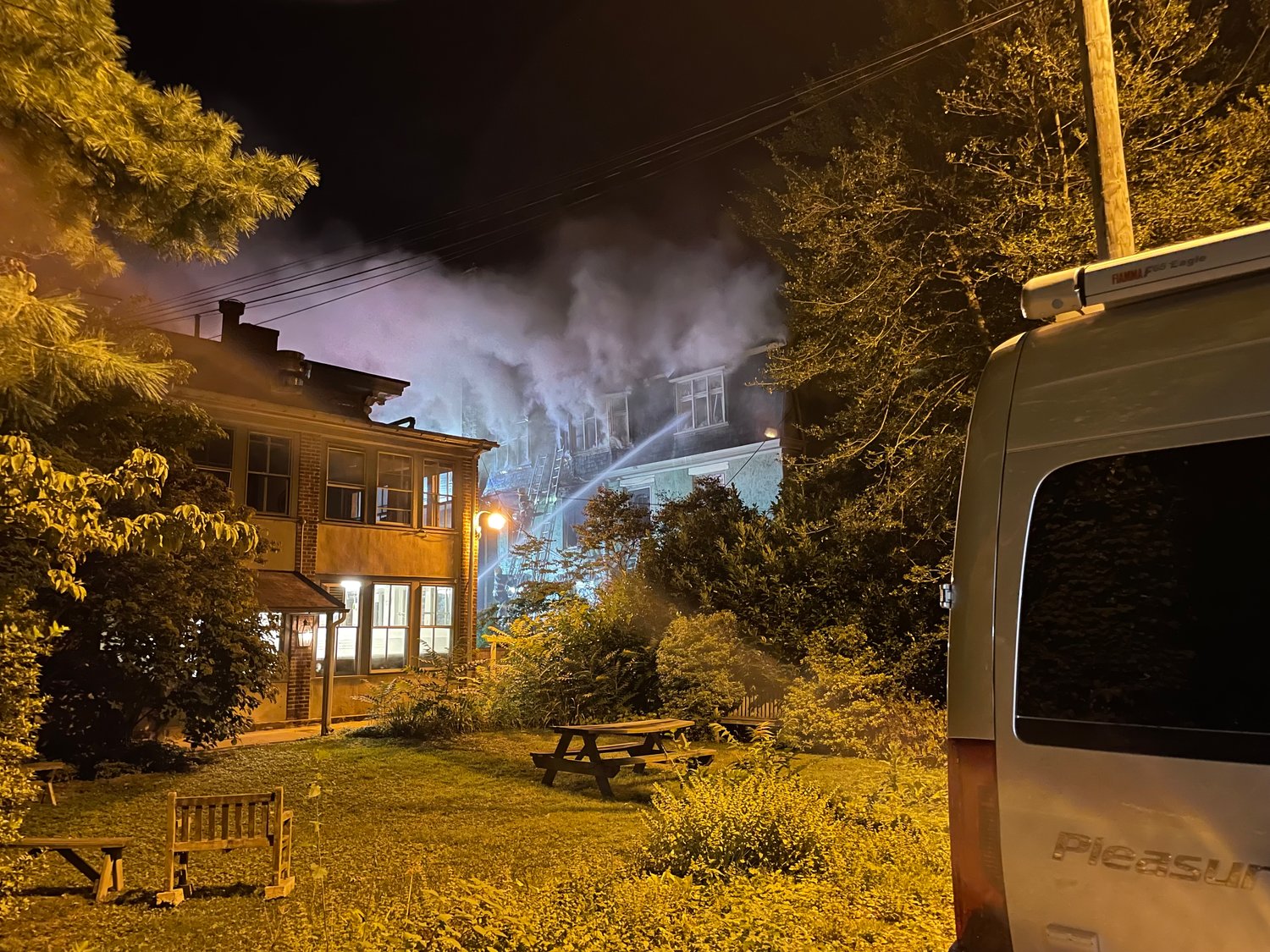 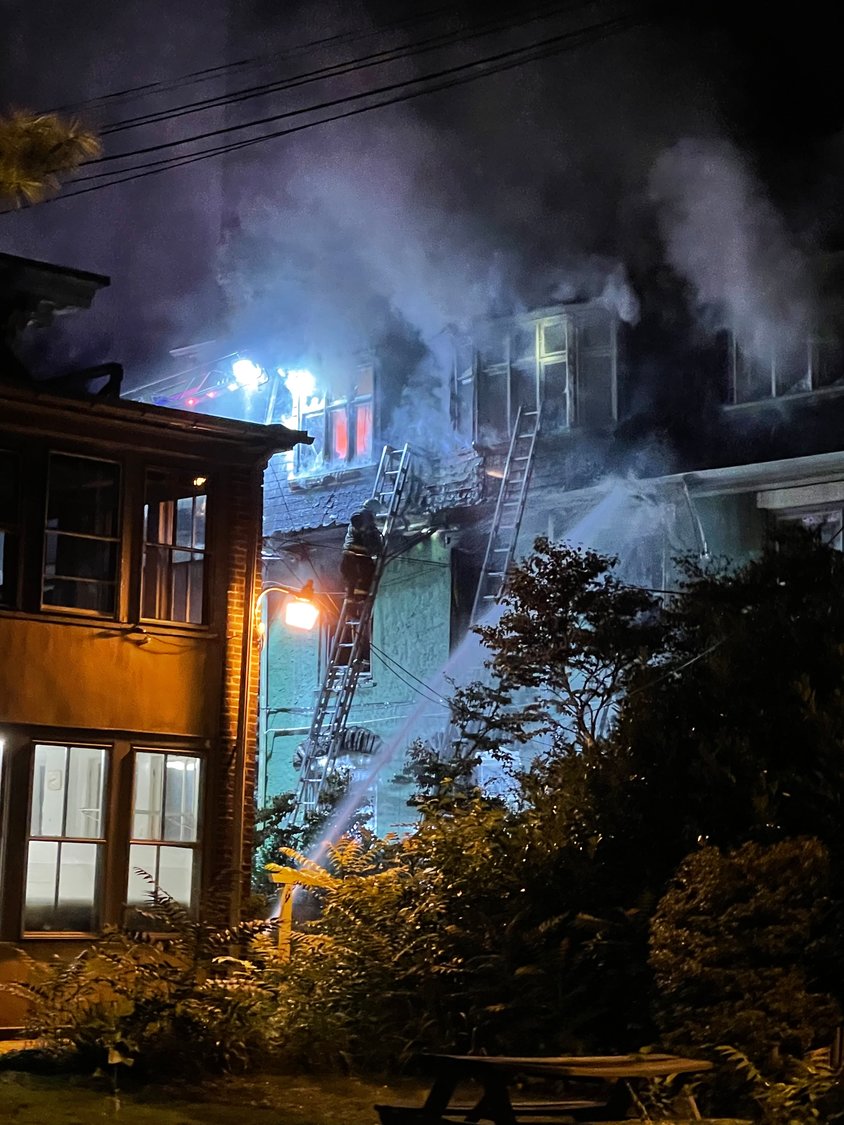 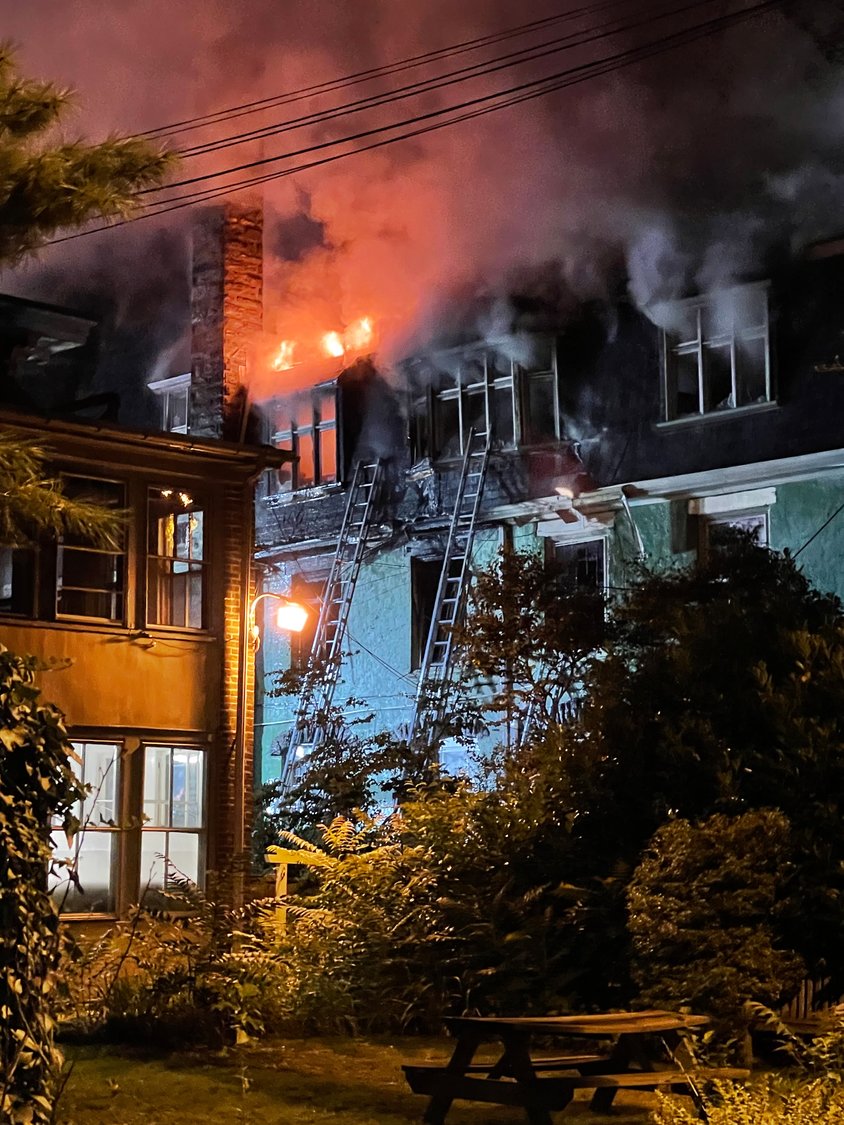 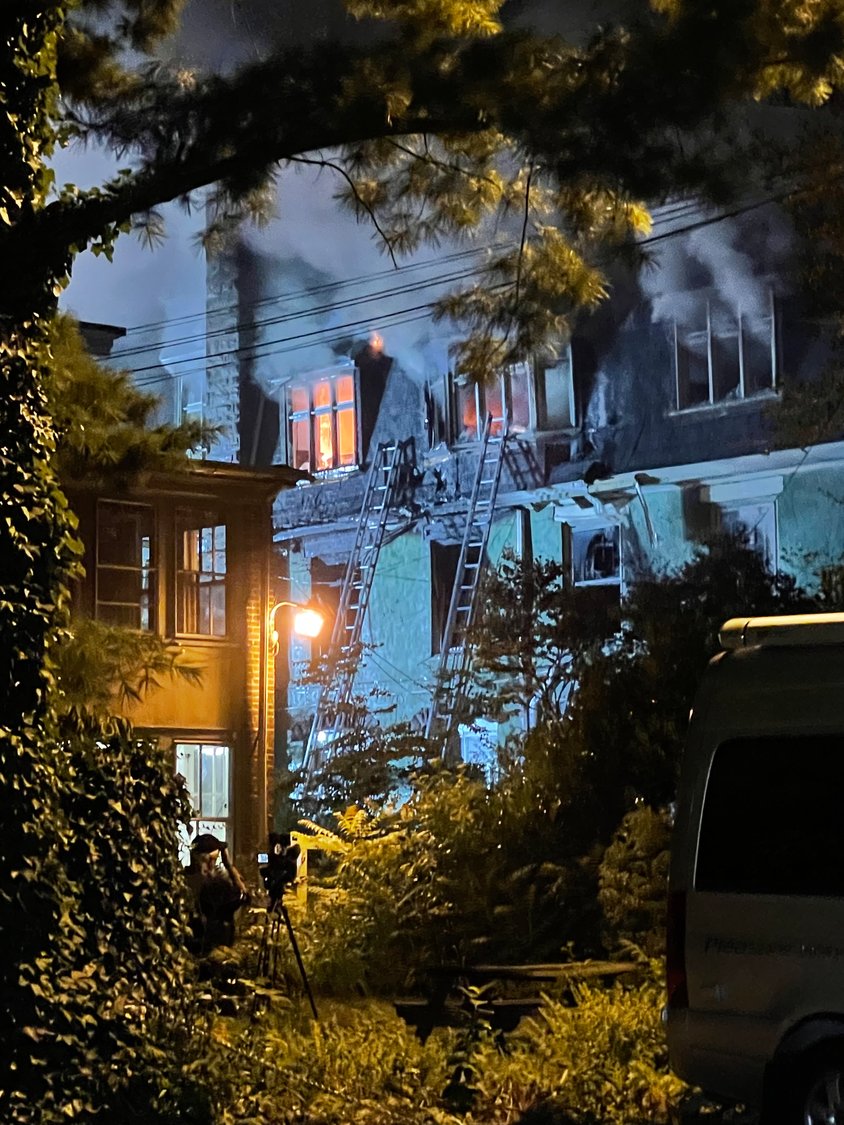 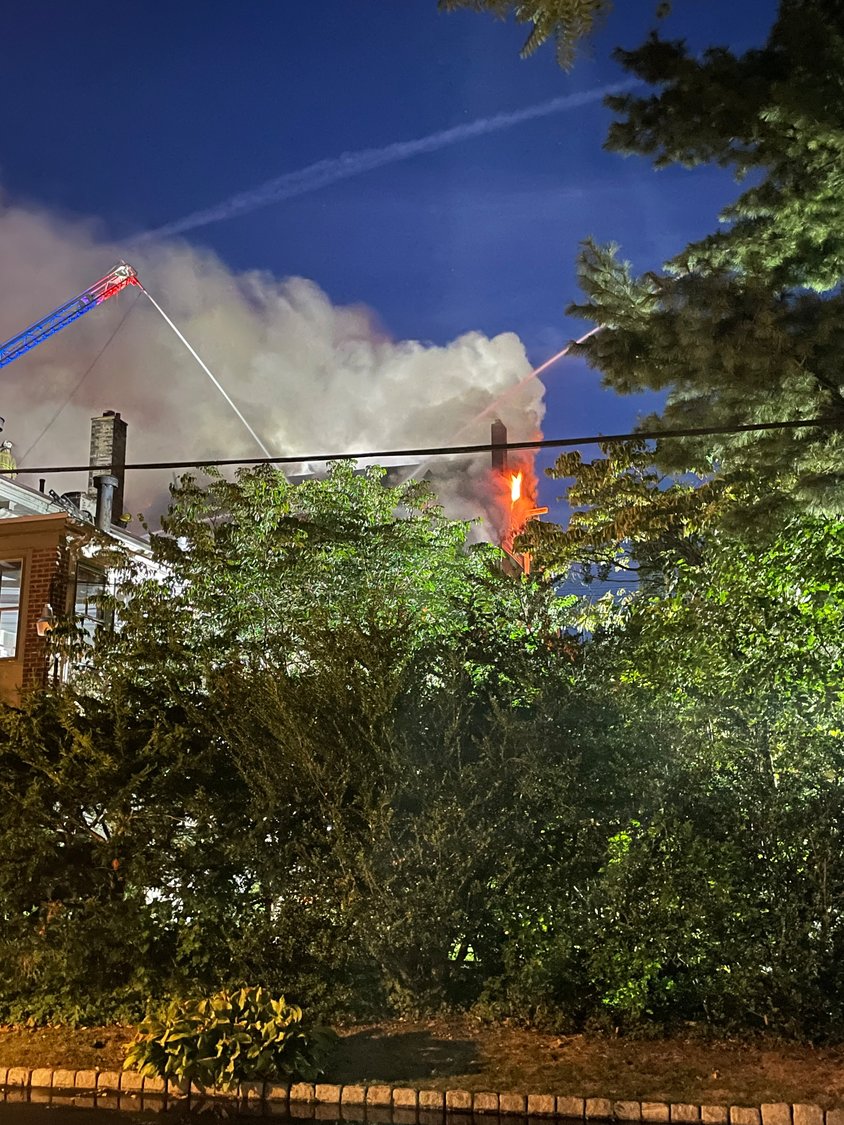 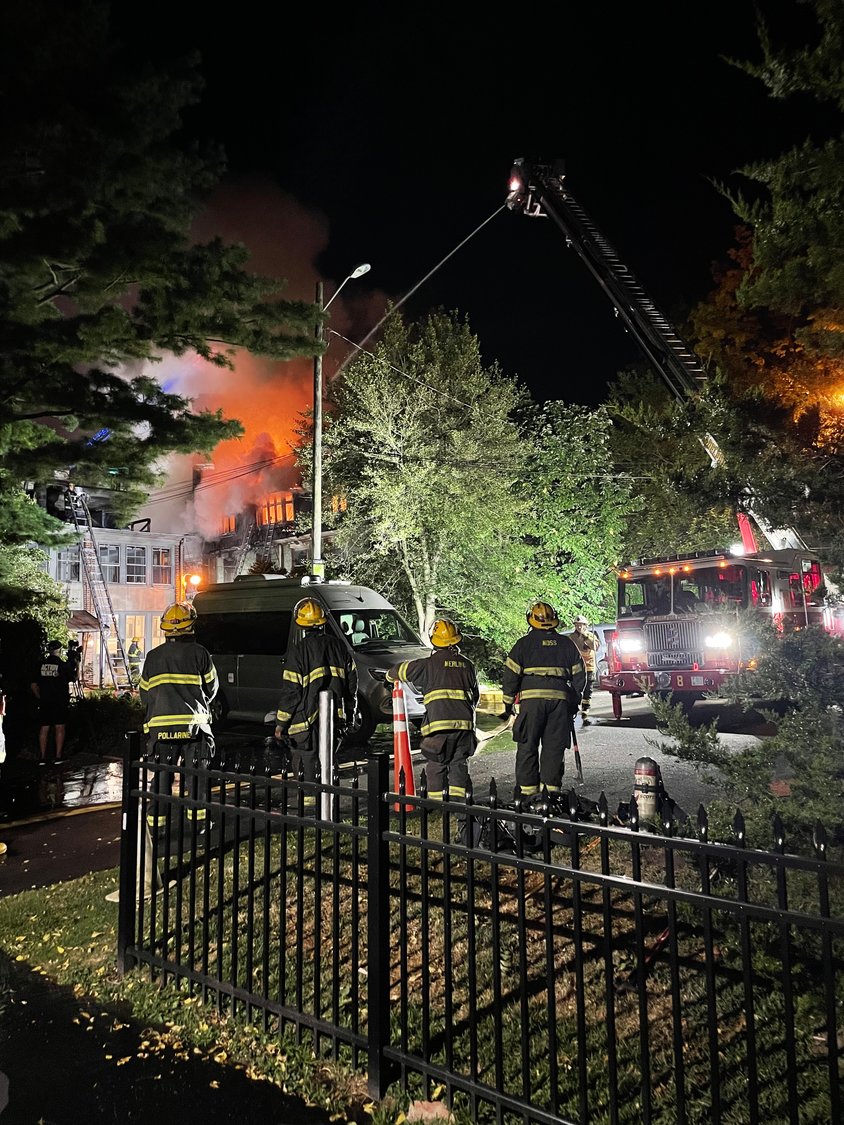 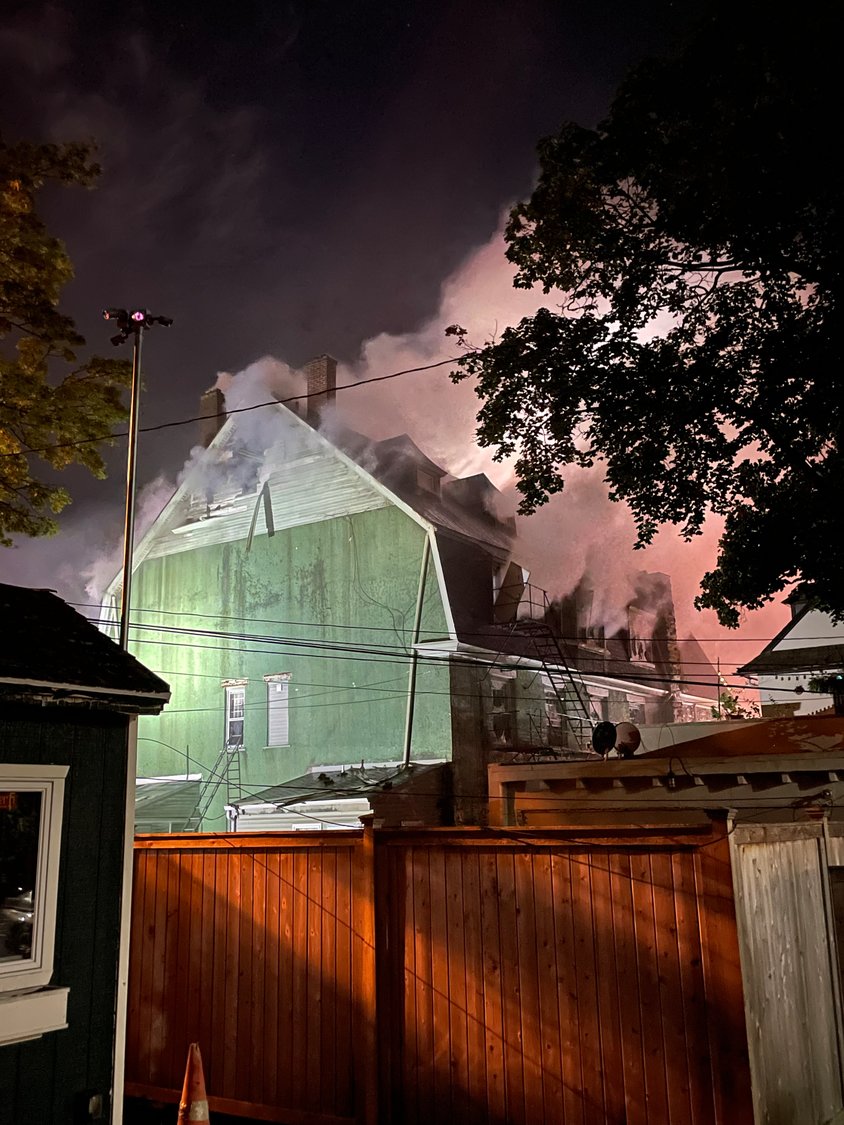 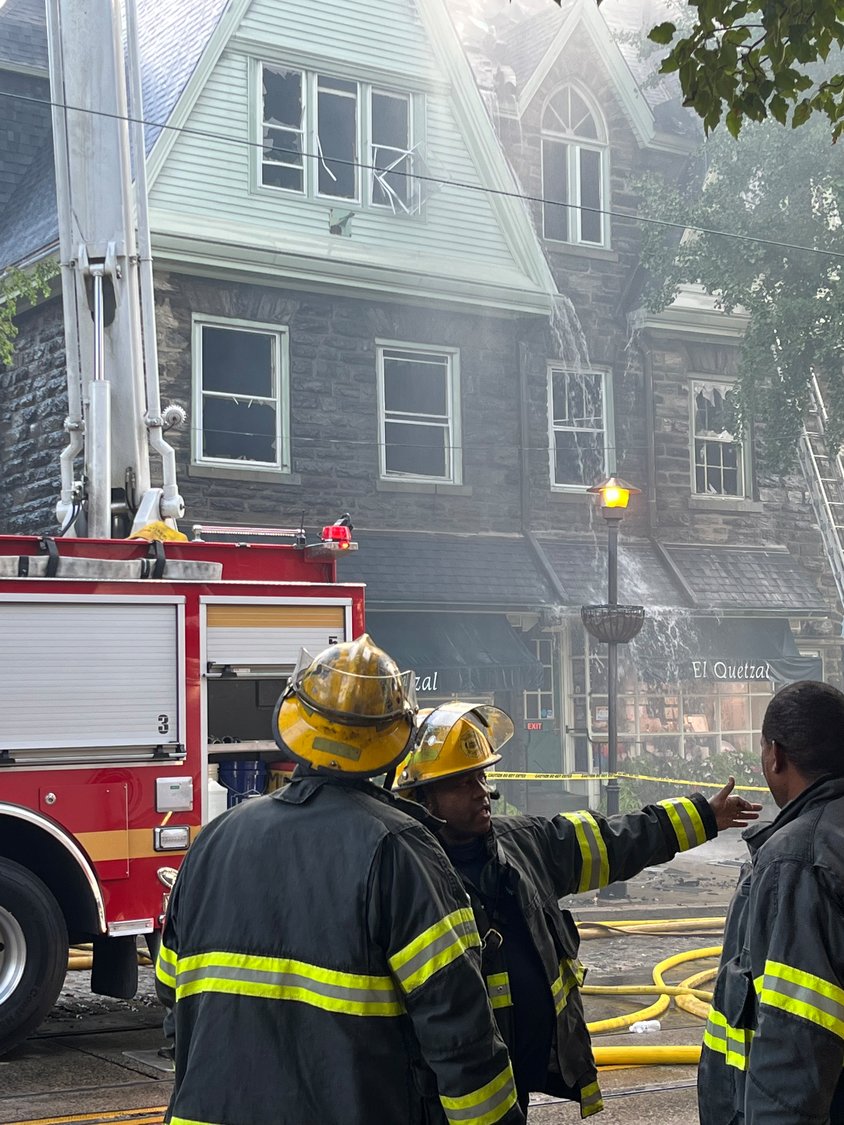 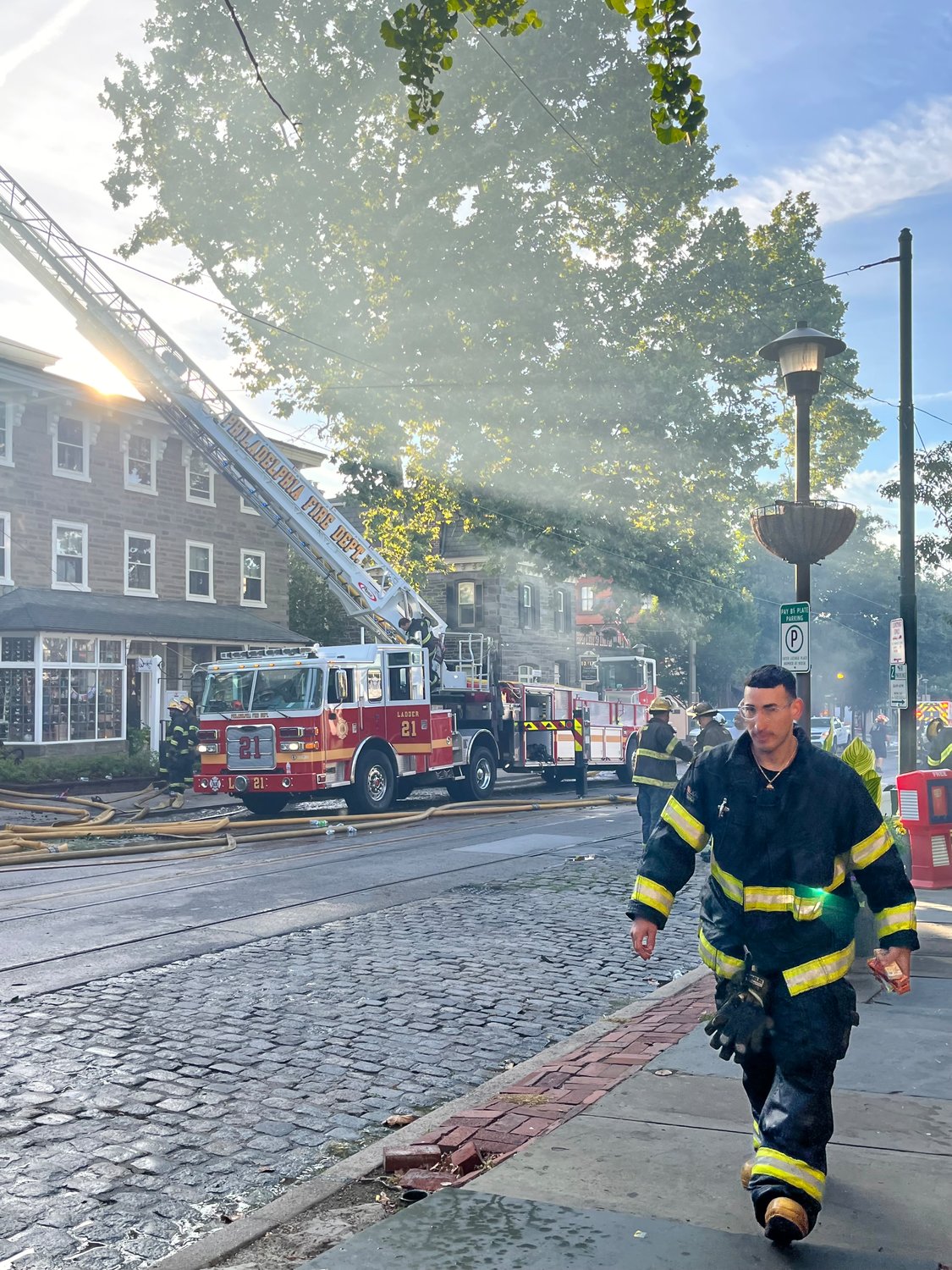 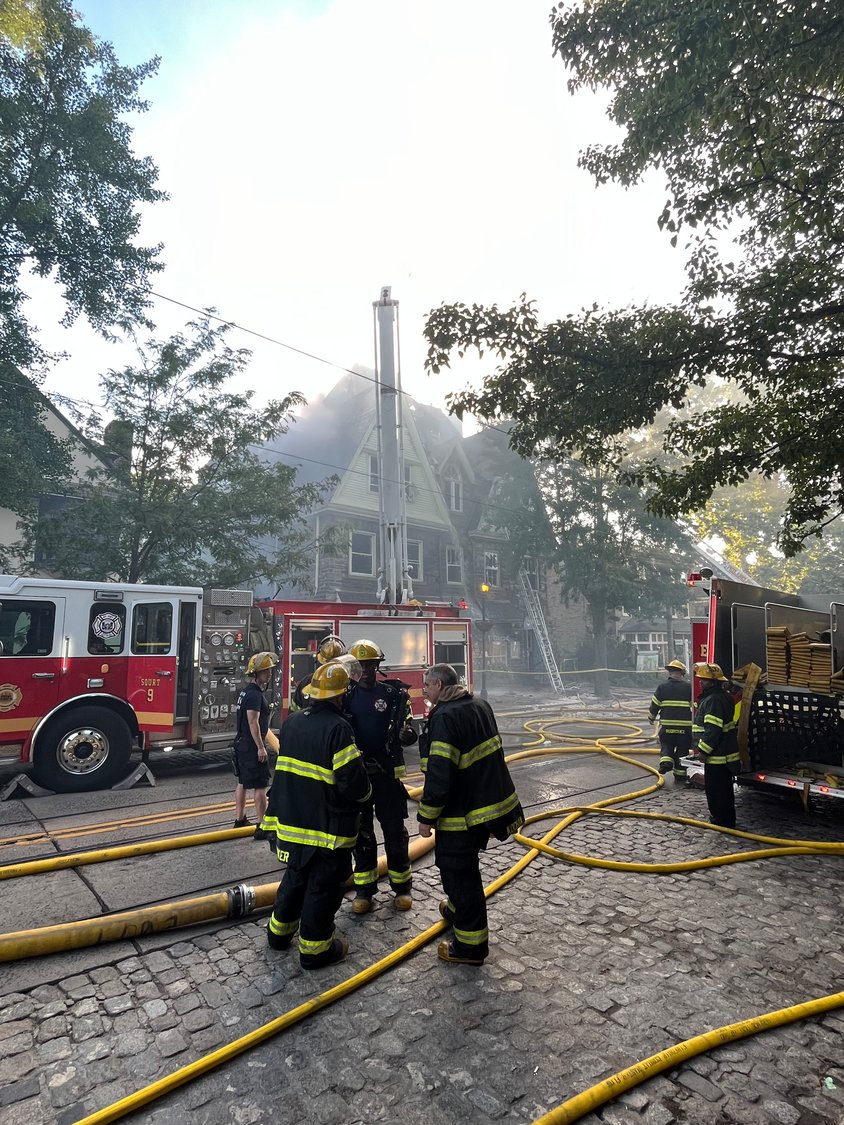 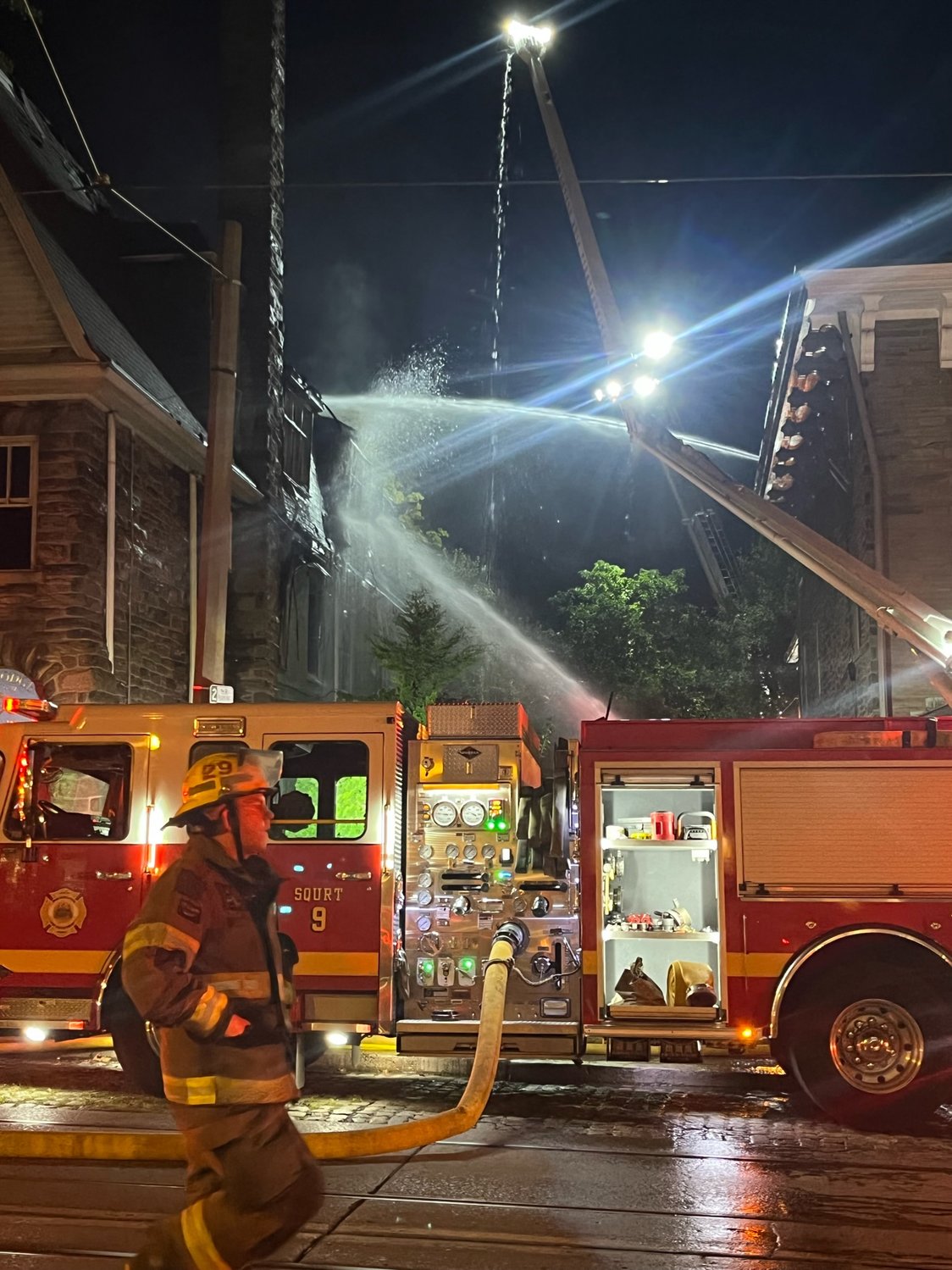 Firefighters had to return to the scene on Tuesday night, when the fire re-ignited. They were on site until about 3 a.m. Wednesday.
Photo by Hillary O'Carroll 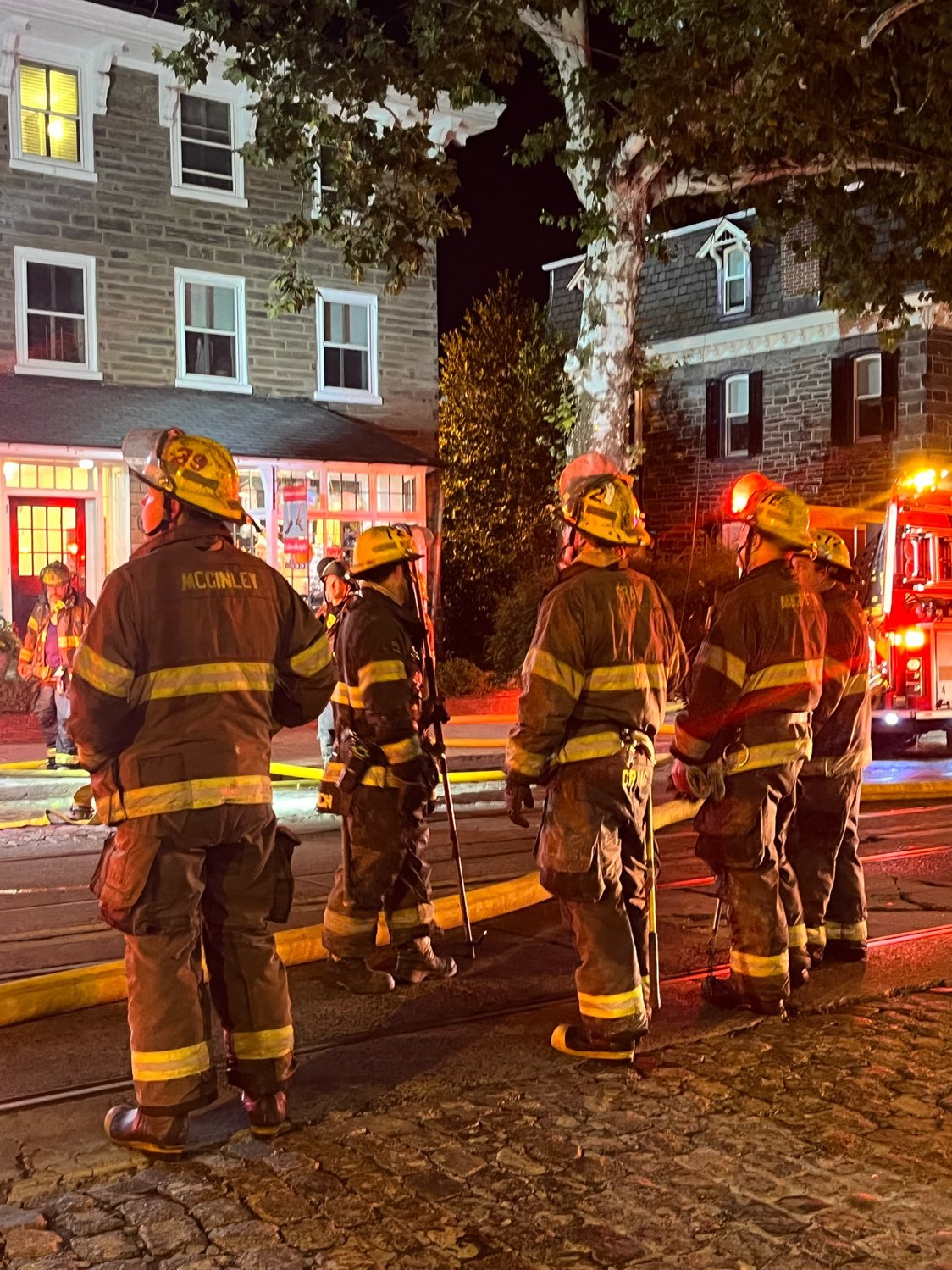 A two-alarm fire ripped through a historic building on Germantown Avenue early Tuesday morning as neighbors awoke to the sight of flames shooting out of the roof and the sound of firefighters breaking glass.

The building, located at 8425-27 Germantown Avenue, houses a Masonic lodge headquarters; El Quetzal, a boutique that sells clothing, jewelry and home accent items; and a ground floor apartment at the rear.

City spokesman Kevin Lessard said that as a result of the fire, the roof is collapsing,  the exterior wall is fractured and the 2nd floor joists are damaged - and the property is now considered imminently dangerous by the city's department of Licenses and Inspections.

According to Fire Marshall Dennis Merrigan, the fire was first reported at 3:07 a.m. on Tuesday and was declared to be under control by 6:12 a.m., although firefighters were still on the scene and hosing down the building until  late that afternoon. A fire is considered under control when it is no longer spreading and no additonal fire trucks will be needed, he said.

Then, later that evening, a blaze re-kindled in a corner of the building and firefighters had to return and hose the building down again. They remained on site until about 3 a.m. Wednesday.

"Companies did return last night for smoke showing from the roof," city spokesman Kevin Lessard said. "We had all hands in service, four engines and two ladders. We arrived on  location at 10:50 p.m. and the fire was placed under control at 11:29 p.m."

The fire is still under investigation by the Fire Marshal’s office, Lessard said. The cause might not be available for a few days.

Joe Thomas, who owns the nearby Jacob Ruth funeral home and lives in  the house behind it, said he noticed the new blaze right before going to bed on Tuesday night and called 911.

Spice Rack co-owner Shannon LeBraun said he noticed the strong smell of smoke when he left his store at about 10:30 p.m.,  and by the time he got to his house on the 8100 block of Germantown Avenue fire trucks were streaming back up the street.  He walked back up to see what was happening.

"I didn't see a blaze, but I did see just really a lot of smoke," he said.

No one was injured in the fire, Merrigan said, and it's unclear what caused it.

Thomas said he was first awakened by  loud banging and the sound of breaking glass in the early hours of Tuesday morning.

“At first I thought someone was breaking in,” he said. “But then I looked out the window and saw flames shooting up into the sky.”

“It was like a towering inferno,” said Alyssa Vallone, who also lives in the house  and works at the funeral home.

The roof collapsed in the rear of the building around 7 a.m. as firefighters shot water into that area of the structure. On Germantown Avenue, observers chatted about the fire, snapped pictures and were misted with water droplets and ashes that drifted from the fire site.

As of press time on Tuesday, the firefighters were still dousing the building and preventing passersby from walking near it because they were unsure about whether or not it could collapse. Streams of water were running down the curbline of the sidewalk, all the way down the avenue, and a basement contractor was handing out his card to property owners, offering to come and clean up after any water damage.

Over it all hung a thick stench of smoke that billowed over the neighborhood.

Richard Snowden, a prominent developer and preservationist who owns a lot of property along the avenue described the damage as “potentially a preservation disaster.”

“The interior lodge spaces are among the most beautiful in Chestnut Hill - if not the city,” he said. “Thank God no one was hurt. Now we must come together as a community and help the folks at Hiram Lodge and El Quetzal in any way we can to restore this Chestnut Hill landmark.”

According to Thomas, Fire Battalion Chief John O’Neill, who was one of the first firefighters on the site, grew up on Gravers Lane.

“He and I used to play together,” Thomas said.

“We met with them,” she said. “They were considering it.”

The exterior of the building underwent numerous changes in the early 1900s, including alterations to the facades of the storefronts and the addition of fire escapes.

The most radical changes occurred in 1960, when the front façade was “colonialized” during a program to rebrand Chestnut Hill’s business district as a “horizontal department store.” During this alteration, decorative trim was removed from around the windows, the storefronts were unified using a small overhanging roof, and shutters were added.

The building had been undergoing renovations at the time of the fire.

Beth Milley, owner of the nearby store Villavillekulla, said one of her employees noticed a strong chemical odor coming from the building on Monday afternoon at about 1:30 p.m.

“She said the smell was so strong that it took her breath away,” Milley said. She did not know whether the smell had anything to do with the renovations.

Will Detweiler, president of the Chestnut Hill Community Center which is next door to the 8425-27 building, stood across the street and watched as firefighters doused the building with water and flames shot up from the roof.

“I think this is a tragedy,” Detweiler said.

Carole Tippett, who has lived in Chestnut Hill her entire life, said she was saddened by the fire, and what it might mean to the future of the building and the site.

“I hope it can be restored,” she said.

Kate O’Neill, director of operations for the Chestnut Hill Business District, said business owners all along the avenue were reeling from the news.

It was also the kind of moment when Chestnut Hill’s neighborhood character really reveals itself, she said.

“Starting early this morning, people from across the community started reaching out, asking how they could help, and what they could do,” O’Neill added. “Anne McNally from McNally’s Tavern, Cathy Brzozowski from [Chestnut Hill] Hospital - really it’s everyone who wants to come together and be supportive. It’s classic Chestnut Hill.”

John Derr and Leisha Shaffer contributed to this report.

Correction: This story has been updated from the original version, which stated that no one was in the building when the blaze broke out. There was a tenant in the building at the  time. She escaped unharmed.