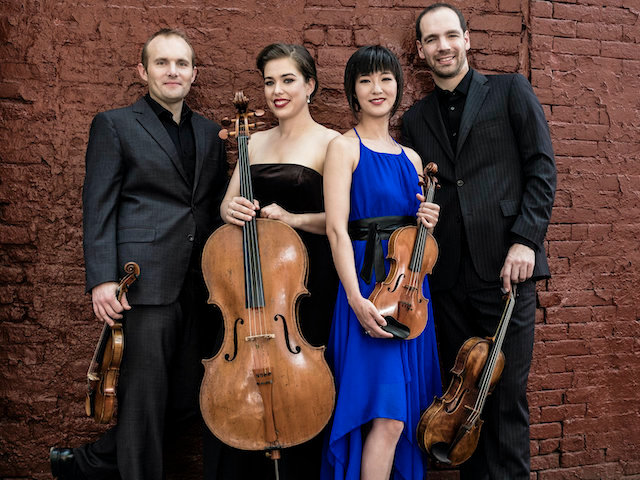 A classical music aficionado once told me he thought the most beautiful music in the world was the sound of a string quartet. For those who might not know, a string quartet, developed into its current form by composer Joseph Haydn in the 1750s, consists of four string players – two violin players, a viola player and a cellist – or a piece written to be performed by such a group.

Since Haydn's day, the string quartet has been prestigious and considered one of the true tests of a composer's art. This may be partly because the palette of sound is more restricted than with orchestral music, forcing the music to stand more on its own rather than relying on tonal color.

And in the Philadelphia area, the most extraordinary exponent of this ethereal music is the Jasper String Quartet, who will be plying their craft on Thursday, Nov. 7, 7:30 p.m., at the Chestnut Hill Friends' Meetinghouse, 20 E. Mermaid Lane. They will be playing Beethoven’s String Quartet Op. 18 No. 4, an “amazing” quartet by Vivian Fung and the timeless masterpiece, “Death and the Maiden,” by Schubert.

The Jasper String Quartet, oddly enough, is named for a national park in Alberta, Canada, because “It is a beautiful place, and we all liked the sound of the name. Getting four people to play together is sometimes challenging. Finding a name that four people like is almost impossible.”

The members of Jasper are J. (given name John, but he only uses his first initial) and Rachel Freivogel, of Elkins Park (originally St. Louis and Ann Arbor, Michigan, respectively). Karen Kim of Center City (originally Lacrosse, Wisconsin) and Sam Quintal of East Falls (originally Fairbanks, Alaska). They have been playing together for 16 years and collectively have been playing their instruments for over 100 years.

J, Freivogel and Quintal met at Oberlin Conservatory in Ohio. Then they went to String Quartet graduate residencies at Rice University and Yale.

“As we were finishing up our graduate program at Yale nine years ago,” Quintal, the group’s spokesperson, told us last week, “we joined the roster of Astral Artists in Philadelphia. When we wanted to relocate from New Haven to a city with a larger airport, we already had a sense of the area and some crucial connections to the arts.”

Jasper is now the professional quartet in residence at Temple University.

“We have been working with the Temple Center for Gifted Young Musicians for the past five years. We coach two of their advanced high school level string quartets and teach some students privately. We love playing our concerts in Chestnut Hill. It is very special for us to bring the music that we love and perform all over the world to our own community.”

The quartet has played for an audience of 3000 people and for as few as five people.

“We loved both, but usually we play for 50-250,” said Quintal, “because chamber music works best when there is an intimacy to the experience.”

Is it hard to have a personal life when you are always on the move, rehearsing and performing?

“Yes, it is difficult, but we feel very lucky to be able to do what we love as our vocation. We all have families and small children, and we try to support each other and arrange our rehearsals and travel to make everyone’s lives work. Mostly it requires lots of planning and shared calendars.”

The Jasper String Quartet was the winner of the prestigious CMA Cleveland Quartet Award. In 2008, the Jaspers swept through the competition circuit, winning the Grand Prize and the Audience Prize in the Plowman Chamber Music Competition, the Grand Prize at the Coleman Competition, First Prize at Chamber Music Yellow Springs, et al. They were also the first ensemble honored with Yale School of Music’s Horatio Parker Memorial Prize, an award established in 1945 and selected by the faculty for “best fulfilling … lofty musical ideals."

“We love playing a wide variety of composers,” said Quintal, “and we learn something different from each one. But if you twist our arms and ask us which composer’s string quartet works we’d choose to have if we were marooned on a desert island, we would all probably say Beethoven.

“The most difficult piece we have learned was our quartet’s commission of Aaron Jay Kernis’ third string quartet, ‘River.’ We usually are able to play through a piece after two weeks of rehearsal, give or take. In the case of Aaron’s quartet, it took us a full three months before we were able to make it sound anything like music. We think it is a remarkable piece and later recorded it.”

What is the best advice the quartet has ever received?