Even though Jonathan Dargan has been helping to keep Chestnut Hill beautiful and clean for the past 13 years, not many people know who he is for the simple reason that he leaves his apartment at about 3 a.m., and finishes his work by 8 a.m. 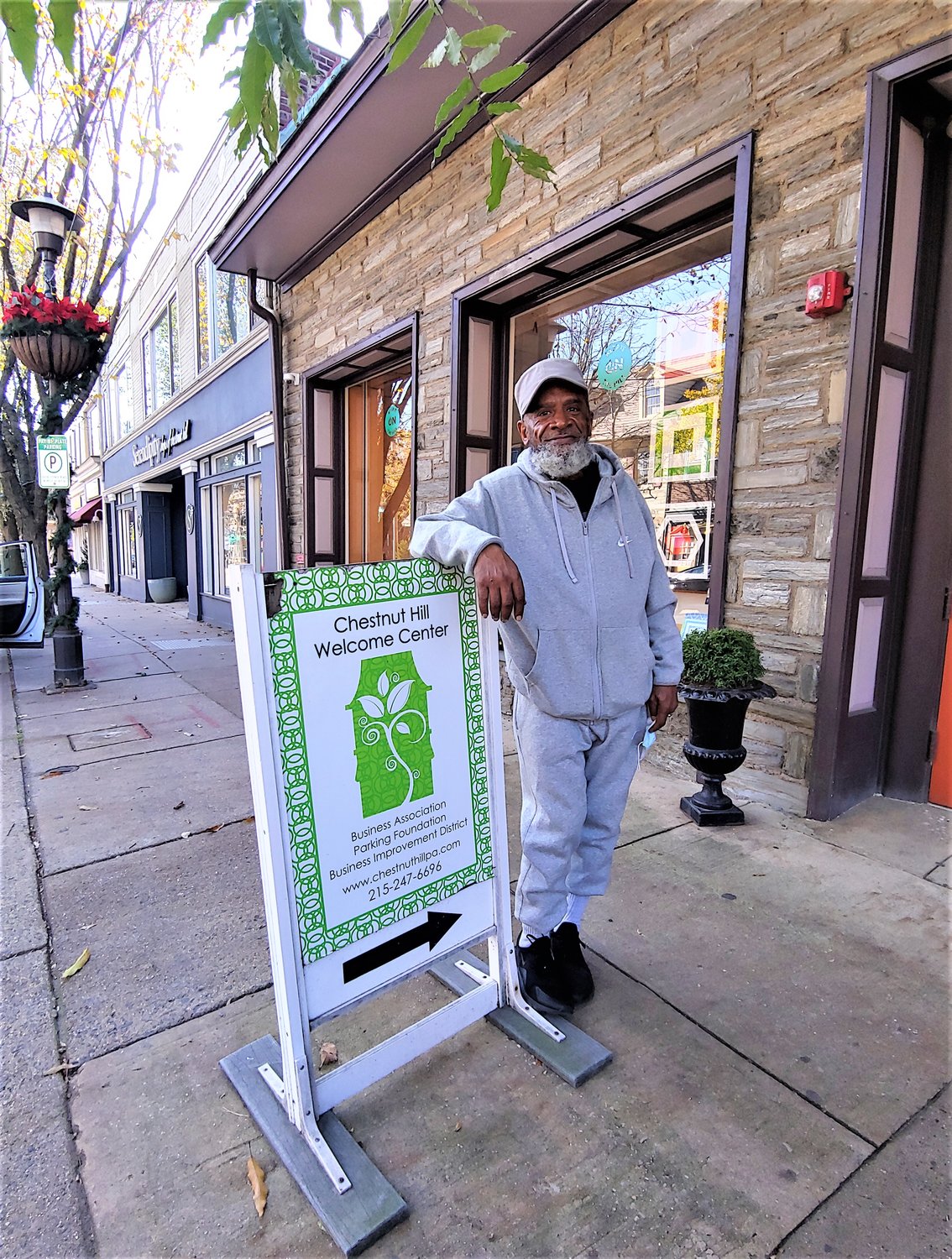 This might be the only time you see Jonathan Dargan because his work for the Chestnut Hill Business District takes place so early in the morning.
Kate O'Neill
Posted Thursday, November 25, 2021 6:01 am
by Len Lear

"Jonathan is a dedicated and hard-working member of our Business District staff. The labor of our maintenance and gardening crew early in the mornings goes unseen by many, but it is critical in keeping our Avenue clean, safe and beautiful year-round."

Last week this comment was made by Philip Dawson, Executive Director of the Chestnut Hill Business District, headquartered at 8514 Germantown Ave., who added, “I know that the Local has on occasion published features about the ordinary workers who keep our community running and looking its best. It struck me this morning that it might be nice to highlight the Chestnut Hill BID's Maintenance Attendant, Jonathan Dargan.”

The fact is that even though Jonathan has been helping to keep Chestnut Hill beautiful and clean for the past 13 years, not many people know who he is for the simple reason that he leaves his one-bedroom apartment in Germantown five days a week at about 3 a.m., even before farmers get up, and finishes his work between 7 and 8 a.m., when many area residents are just picking their head up off a pillow.

“I like it that early because it's so quiet,” said Dargan, 64, who grew up in North Philly. “At 3 a.m. there are almost no other cars on the road, so there is really no traffic.”

Jonathan's duties include emptying trash cans, picking up litter, weeding in the summer, leaf blowing in the fall, shoveling the corner crosswalk ramps in the snow and helping to plant and water the flowers in the warmer months. He finishes his work before many businesses open for the day.

Dargan is a pleasant, unassuming guy who admits he has a checkered past. After graduating from Bartram High School, he went into the U.S. Marines. He loved working out and staying physically fit, and he loved traveling to Africa and all over Europe. His favorite country was Kenya (“the people were so friendly, and the country was beautiful”), and he even enjoyed his time stationed at Marine bases in North and South Carolina.

“I would have made it a career,” he said, “if it was not for the racism within the Marines. It seemed like every time there was a chance to move up in rank, the white guys and [Hispanic] guys got it and not us. I was a Lance Corporal after four years, and I definitely should have been a Sergeant.”

After leaving the Marines, Jonathan came back to Philadelphia and did odd jobs, but he also made some “really bad decisions” that landed him in and out of jail over the next 25 years. Jonathan prefers not to go into great detail, but he readily admits he made terrible decisions and that “you can't always blame someone else [for your bad decisions].”

On the other hand, “A lot of people are ashamed of this kind of thing but not me.”

When Dargan left prison for the last time in 2008, he admits he was not exactly ready for the workforce because of an addiction to alcohol and drugs. Again, he is candid about having to spend 63 days in a drug rehab facility and then transitional housing, but he has stayed sober and drug-free for 13 years, thanks to a 12-step program, a sponsor and friends who have kept him on the right track.

Just when Jonathan was starting to turn his life around 13 years ago, a friend who had done some work for the Chestnut Hill Business District suggested that he check it out himself. As a result, Jonathan began shoveling snow, cleaned 52 windows for someone else and found more and more chores to do. “The people were nice in Chestnut Hill, and I was making money doing honest work, so I stayed with it,” he said.

At one point, Dargan also went to the Philadelphia Technician Training Institute in West Oak Lane and completed a nine-month program to become a certified auto mechanic. He continued working in Chestnut Hill early in the morning and the rest of the day worked as a mechanic on city vehicles as a city employee. He was laid off almost at the end of his six-month probationary period.

Dargan has lived in Germantown for 13 years but will not go out after dark, not only because he has to get up so early in the morning but also because “the high beams on cars are blinding, and it is dangerous after dark.”

On the other hand, “I love Chestnut Hill. The business people wave at me, and everyone is so nice up here. The other day Kate O'Neill [Director of Operations at the CHBD] even took me to an appreciation meal at the Breakfast Boutique. I will keep working here as long as I can.”