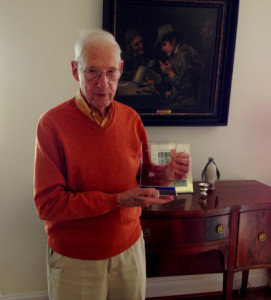 Former Chestnut Hill resident Thomas Dolan IV, 90, a freshwater ecologist and pioneering environmentalist, holds up the 8th Annual Henry Meigs Award for Environmental Leadership he was given Oct. 3 by the Schuylkill Center for Environmental Education in Roxborough. (Photo by Kevin Dicciani)

Thomas Dolan discovered his love of nature at the age of 11. After spending summers with his family on the Allagash River in Maine and time with his father on Chesapeake Bay, an indelible mark was left on Dolan that would encourage him to dedicate his life to the care and preservation of the environment.

Fast-forward 79 years, and Dolan and his life’s work are among the most important in the fields of environmentalism and ecology. His illustrious career, which includes working with pioneering ecologist Dr. Ruth Patrick of Chestnut Hill, who died last month at the age of 105, has paved the way for a new generation of environmentalists.

Originally interested in studying geology, Dolan’s mind changed after driving ambulances for the British in India and Burma during World War II. When the war ended, Dolan knew he wanted to do something significant with his life.

“I just knew that I didn’t want what I would’ve called an ‘inside job’,” Dolan said. “So many of my friends went into financial fields. I said, ‘No–that’s not for me.’ I was interested in what could be done for — well, we didn’t even call it the environment back then — what was called ‘conservation.’ I wanted to do something to make a difference.”

Dolan grew up in Devon on the Main Line. He attended Episcopal Academy and then went to boarding school at St. Paul's in Concord, New Hampshire. After the Second World War, he moved to Flourtown in 1949 and has lived in the suburbs near Chestnut Hill ever since.

With only four universities in the country offering majors pertaining to conservation efforts — the Universities of Wisconsin, Michigan, Penn State and Cornell — Dolan chose Cornell, where he earned a degree in Zoology and Conservation in 1948. The major, and the movement, was in its infancy back then. “These courses are now given in every state in the union,” Dolan said. “It’s amazing how things have changed.”

Dolan didn’t even make it to his college graduation; he had already started his work on the Conestoga River with Dr. Ruth Patrick at the Academy of Natural Sciences, developing a protocol for testing the health of streams, rivers and lakes by studying their bio-diversity. The work was not only innovative but also grueling.

“When you do this kind of work,” Dolan explained, “it’s not an eight-hour day. It’s more like a 10 or 15-hour day. We were out in the field everyday, collecting everything that lived in the stream, whether it was the algae, the higher plants, rotifers, micro-invertebrates, macro-invertebrates, insects, leeches and, of course, fish.”

Why is bio-diversity so crucial in determining the health of an ecosystem? “If you had very little diversity, that would be an immediate indication that something was wrong with the stream, that it wasn’t ecologically balanced. If there’s bio-diversity, you have the capability of recovering. If one species gets knocked out, you have other species to fill in the ecological niches.”

Despite the long hours and demanding work, Dolan and the crew, including Dr. Patrick, knew how to have a good time when the day was over. “There was a place called the Stockyard Inn,” he said. “Dr. Patrick and the rest of us made our way there every night. She would drink beer with the boys, and we always had our slab of roast beef. She was more fun to be with; she was a very charming, socially-oriented person.”

Dolan remembered one specific incident in which the crew went a little overboard one night, and Dr. Patrick had to discipline them. “The boys kind of lived it up one night,” he said, “and I guess we didn’t put in as much time as Dr. Patrick would’ve liked us to. So, the next day she got us at breakfast and said, ‘Alright, you guys are flagged. You’re grounded for the day.’ It was like you were back in school, but that’s an example of what a flexible person she was. She had to marry the business of being hail-fellow well met with the seriousness of the work being done.”

After working with Dr. Patrick for six years, Dolan went on to work with the DuPont Company, applying the methods and protocols he had learned to evaluate other bodies of waters around the U.S. He was first stationed in Victoria, TX, where he worked on the Guadalupe River. From there he bounced around the Southeastern U.S., working on various rivers, including the Mississippi. When he finished working for DuPont, Dolan began working on various watershed projects. One of the most significant, the Brandywine Watershed, would become the first watershed association in the U.S.

Dolan eventually became the director of the Wissahickon Valley Watershed Association in the 1960s, creating flood control programs for 10 municipalities. Also, using data collected from steams and rivers in the area, Dolan and his crews were able to pinpoint what issues were plaguing the steams. The number one problem they found was sedimentation, the run-off from construction sites, as well as a multitude of other pollutants — toxic materials such as oil, grease, fertilizers and sewage. Dolan noted that Philadelphia and its surrounding areas “still have a way to go” concerning sedimentation.

In 1969, Dolan became a member of the Philadelphia Conservationist Board, acting at one point as its treasurer and another as its secretary. In his 17 years with the board, Dolan was most notably involved in overseeing the protection and creation of the Tinicum Wildlife Reserve.

Dolan was also a member of the Philadelphia Zoo board and headed their conservation committee, one of the first of its kind. He was interested in rare and endangered species worldwide and the ways to protect them. The work the committee did helped make them a model for many years for other zoos around the country.

On Oct. 3, as a testament to Dolan’s lifelong devotion to the environment, he was awarded the Henry Meigs Environmental Leadership Award by the Schuylkill Center in upper Roxborough The award is given “to honor leaders whose commanding presence and guidance toward our world’s sustainable future reflects the spirit, integrity and vision of The Center’s founder, Henry H. Meigs.”

Dolan said he was amazed at the progress made within the environmental community since he began his work in 1948. The innovations in technology, he said, are leaps and bounds away from the techniques used in the earlier days and are primarily responsible for exceeding plateaus and discovering things once thought impossible.

“When I think of the work that we did,” said Dolan, who is married with three children, three stepchildren, 11 grandchildren and seven great-grandchildren, “it was crude compared to what they do now. Now they can take a flock of birds going over at 1,000 feet, and with one little ‘beep,’ they can identify what the species is, how many are in the flock, how many are flying in it at night and record all of this. For me of the old school, my mind is boggled by what’s going on. It is truly amazing.”