Erdenheim native Anne Keenan (left) with with her son Joshua is all smiles as she received an Eagles Community Quarterback Award of $10,000 for her nonprofit, Reading Recycled. (Photo courtesy of … 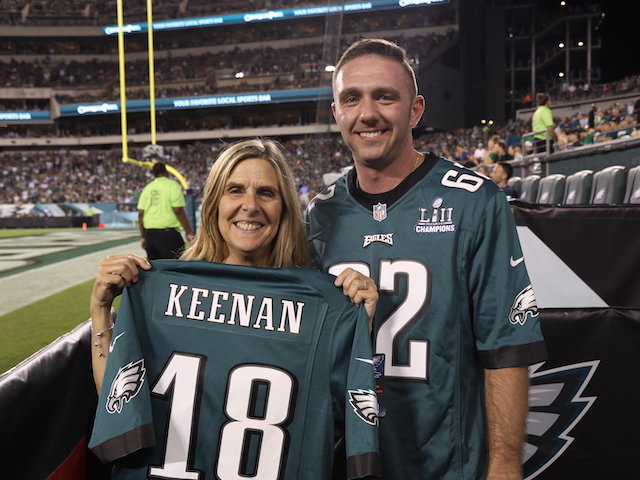 Erdenheim native Anne Keenan (left) with with her son Joshua is all smiles as she received an Eagles Community Quarterback Award of $10,000 for her nonprofit, Reading Recycled. (Photo courtesy of the Keenan family)

Erdenheim native Anne Keenan is on a mission to get more new and gently used books into the hands of children in Philadelphia, and has just taken on the running of a book bank housed at Martin Luther King High School in West Oak Lane.

Keenan, who has a master’s degree in education, just announced that her nonprofit, Reading Recycled, has officially taking over operations of the Jacoby Book Bank from the nonprofit organization Philadelphia READS, a place she has volunteered countless hours at over the past two years.

“I just love the fact that more children in Philadelphia are going to be going home with more books,” Keenan said. “This is a tremendous resource for Philadelphia teachers who can receive up to 375 books for $25, along with a dozen free school supplies.”

Whitney Miller, former program director for Philadelphia READS, was happy with the change.

“Anne has been instrumental in the book bank for the last two years, and I worked very closely with her,” Miller said. “She was our ‘boots on the ground’ person. Anne took it under her wing and gave it the time and attention to be the best it could be and we are very pleased she stepped up and is taking it on.”

Beyond a few programming changes and hours that now start at 3:30 p.m. instead of 3 p.m., Miller said the transition has been transparent and seamless for the teachers.

Last year, the program distributed 24,478 books to hundreds of teachers. Organizers say the book bank can save a classroom as much as $4,000 a year.

Donors can drop books off at the Book Bank on Wednesdays and Thursdays from 10 a.m. until 6:30 p.m. or by appointment. The Book Bank is located at 6100 Stenton Ave. off the Haines Street parking lot.

The organization would welcome more volunteers and more donations of new or gently-used books, especially baby books to donate to community organizations.

Keenan, 60, was drawn to this type of volunteer work as she has fond memories associated with the power that reading had on her as a child.

“You can travel in a book. It changes your mood, and reading fixed everything for me,” said Keenan, who was on a “high” after scoring boxes of slightly used books for children at the close of an estate sale in Whitemarsh with her 28-year-old daughter, Samantha.

On her website, Keenan notes that 61% of low-income families don’t have age-appropriate books in their homes. She adds that studies show that the availability of books in a home is a strong predictor of academic achievement.

“I always wanted to volunteer in Africa, but my husband said “you can do something closer to home” and he was right,” Keenan said. “We are in an area in which children have so much excess, so I find homes for books in a variety of places.”

One collection site is at the Flourtown Gulf Station on Bethlehem Pike at Mill Road, where Keenan does the bookkeeping. She has literacy ambassadors and collection sites scattered throughout Eastern Montgomery County and parts of Philadelphia and she will even pick up books if need be.

“I’d love to broaden my reach to a dedicated collection site in Chestnut Hill,” said Keenan. “Instead of hearing of children who don’t have access to books, I want books to be everywhere they turn so they can’t avoid them.”

In addition, three books are placed in “Birthday Bags” that Keenan makes for children at the Ambler-based Mattie N. Dixon Community Cupboard, as well as Dignity Housing in Philadelphia.

“I’ve been bootstrapping this as best I can, so the money was definitely needed, but it’s a one-time donation,” said Keenan. “We need continued funding to keep this going. I’d also like a few more hours in each day!”

Despite babysitting and reading to a new grandson, Keenan has not cut back on her volunteer hours.

“I spend about 50-plus hours a week toward this program,” she said. “I guess you can say I’m passionate, although I’m generally shy and need to get the word out there.” “We could really use more ambassadors and collection sites.”

“More corporate donors, volunteers, collection drop-off sites, and of course more books,” she said with a laugh. “Just more of everything. I absolutely love what I do and go to bed every night with a happy heart.”