A portion of a study by Econsult presented to Hill institutional leaders. by Brendan Sample During a gathering at Kismet Cowork, the Chestnut Hill Institutional Leaders – a consortium of the 10 … 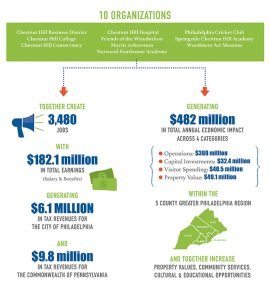 A portion of a study by Econsult presented to Hill institutional leaders.

During a gathering at Kismet Cowork, the Chestnut Hill Institutional Leaders – a consortium of the 10 largest Hill institutions -- presented the results of its Economic Impact Study Event, on Thursday, Nov. 30.

The CHIL commissioned an independent, local research firm, Econsult Solutions, to conduct the study beginning late last year. The main purpose of the study was to accurately quantify and assess the exact economic impact that the institutions of the CHIL have had on Chestnut Hill and the Philadelphia region as a whole.

Comprised of leaders from 10 different Chestnut Hill organizations, the CHIL is a collaborative effort between the institutions that is meant to promote further advancements for the district and synergy between the groups.

The study ultimately found that the combined efforts of each institution have generated $482 million within the five-county (Philadelphia, Bucks, Montgomery, Chester and Delaware) Greater Philadelphia region. This main contributing factor to this figure is the $360 million generated by operational impact, with student and visitor spending, annual capital investments and increased property values rounding out the total.

The study also found that the members of the CHIL create 3,480 jobs with $182.1 million in total earnings, while also bringing over 317,000 visitors to the area who spend $27 million in Chestnut Hill specifically.

After beginning the study in late 2016, Econsult finished its work in the spring in advance of the formal presentation. Although the firm is based in Philadelphia and does extensive work for companies in the city, this study still presented a unique opportunity for those involved to gain a new perspective on Chestnut Hill businesses.

“Throughout this study, we were able to take in a lot of interesting details about the workings of Chestnut Hill businesses,” said Ethan Conner-Ross, a director at Econsult who attended the presentation.

“Learning about aspects, like how so many local businesses rely on foot traffic and the dynamic synergies between systems in the area, is something we wouldn’t have been able to do if not for this study,” he said.

With so many organizations involved with the CHIL, there were ultimately a number of reasons behind the study being commissioned in the first place. Above all else, however, was a desire for the leaders to be the best at what they do along with pure curiosity about their institutions’ impact on the Greater Philadelphia area remained the most prominent motivators throughout the process.

“We all have a desire for excellence, and with that obviously comes a lot of work,” said John Cacciamani, CEO of Chestnut Hill Hospital. “There’s a constant pressure for progress that will continue to add value to the community, and so in the midst of that, we really wanted to understand the full scope and scale of what we were doing.”

Now that the study is completed and the information is readily available, the CHIL will continue moving forward with developing a plan for how specifically to use it. Although the group recognized the importance of doing such a study, it was not commissioned with an exact plan in mind for how exactly to utilize the data.

Although they were not able to offer any specific ideas as to how the data will be used, the leaders were confident that they would find effective methods that would help them further heighten the status of the area.

While the data gathered by the CHIL and Econsult is ultimately important to the former group’s goals, it is certainly not the only element that it will be paying attention to going forward. The group acknowledged the continued importance of abstract factors, such as the impact of both education and charity work on those in the community who benefit from them.

“As big as some of these numbers are, they’re still specifically countable,” said Bill Valerio, director of the Woodmere Art Museum. “Those of us directly involved know that there are plenty of intangible factors to which nobody can assign a number.”