A visionary leader and ‘aesthetic conscience’ 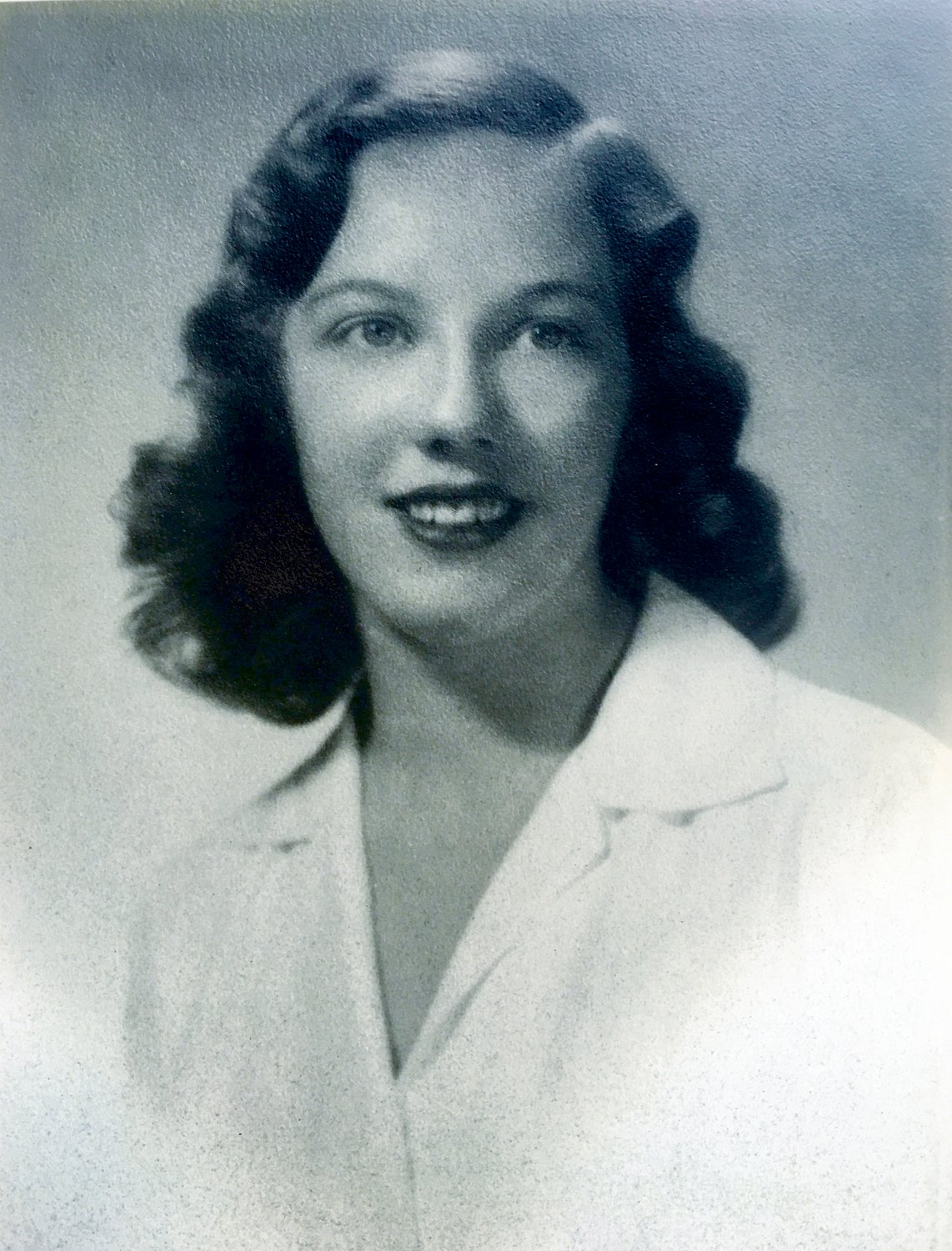 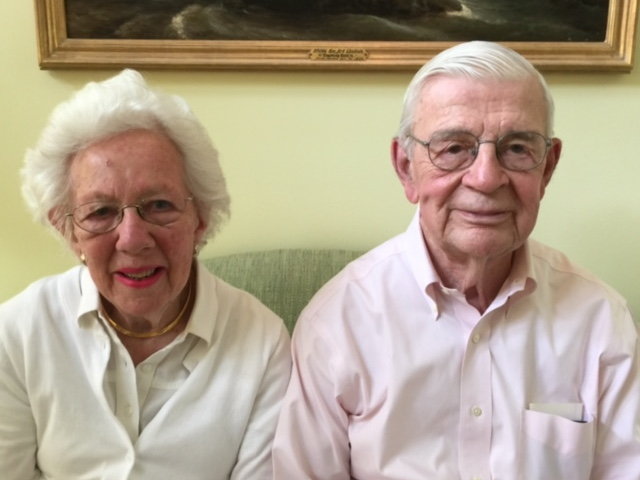 The Local, circa 1980: Dottie Sheffield and Maurie Hahn steady the ladder as Benj Brown mounts brackets outside a second floor window over The Hahn Gallery. “We install wherever they want them,” says Sheffield, who organized the effort to color the Hill with Philadelphia’s colors. Sheffield says that merchants who have ordered plants to install themselves in their outdoor containers may pick them up on Wednesday, May 2, outside Basics, 16 W. Highland Ave. Judith Dalaba of Basics is offering her lot for distribution of the plants. 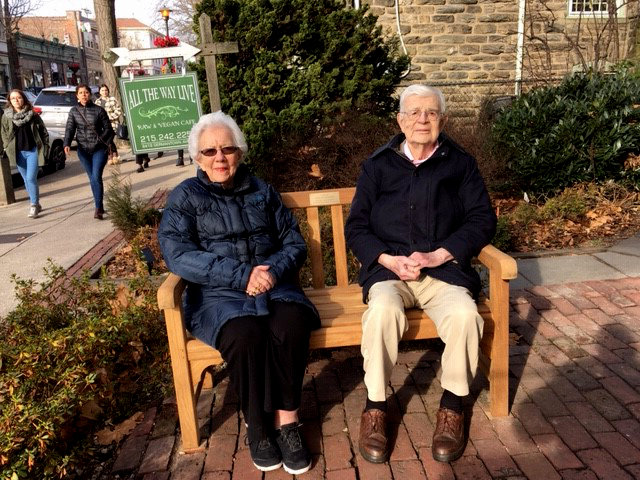 Bird in Hand Consignment dedicated a bench in Dottie’s honor outside their shop, now at 9 W. Highland Ave. Ed and Dottie Sheffield, seated. 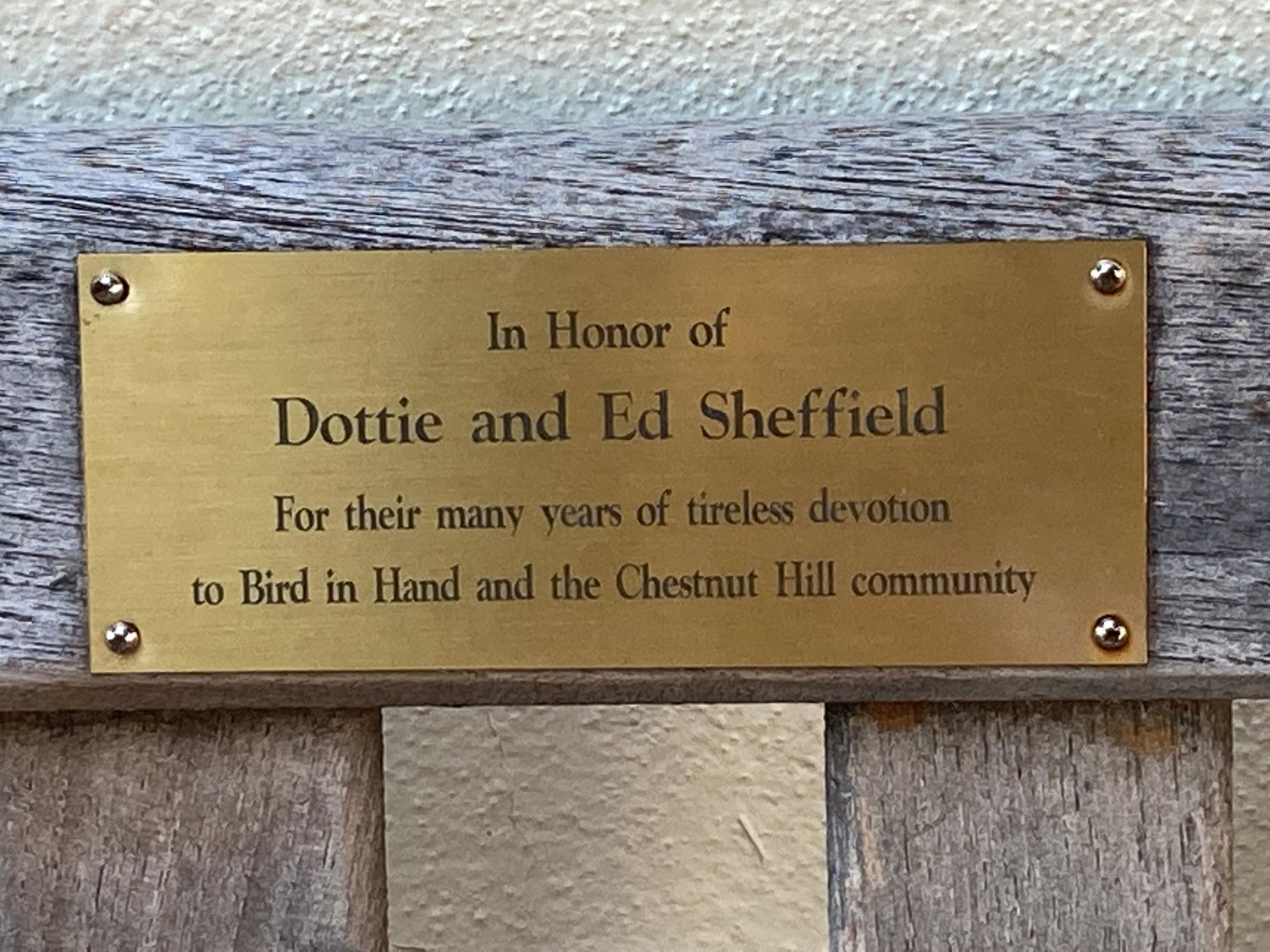 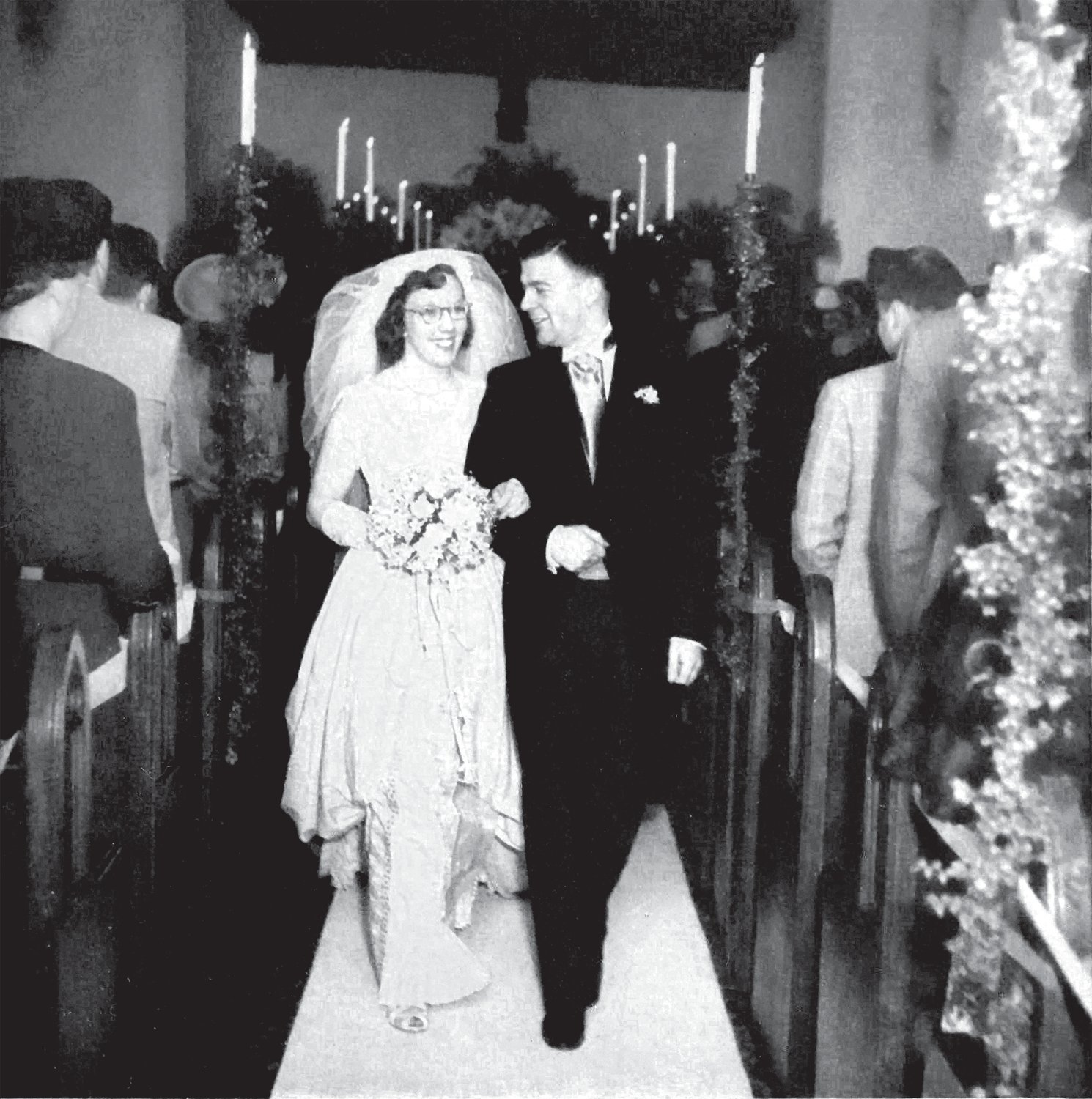 Dottie and Ed Sheffield on their wedding day. 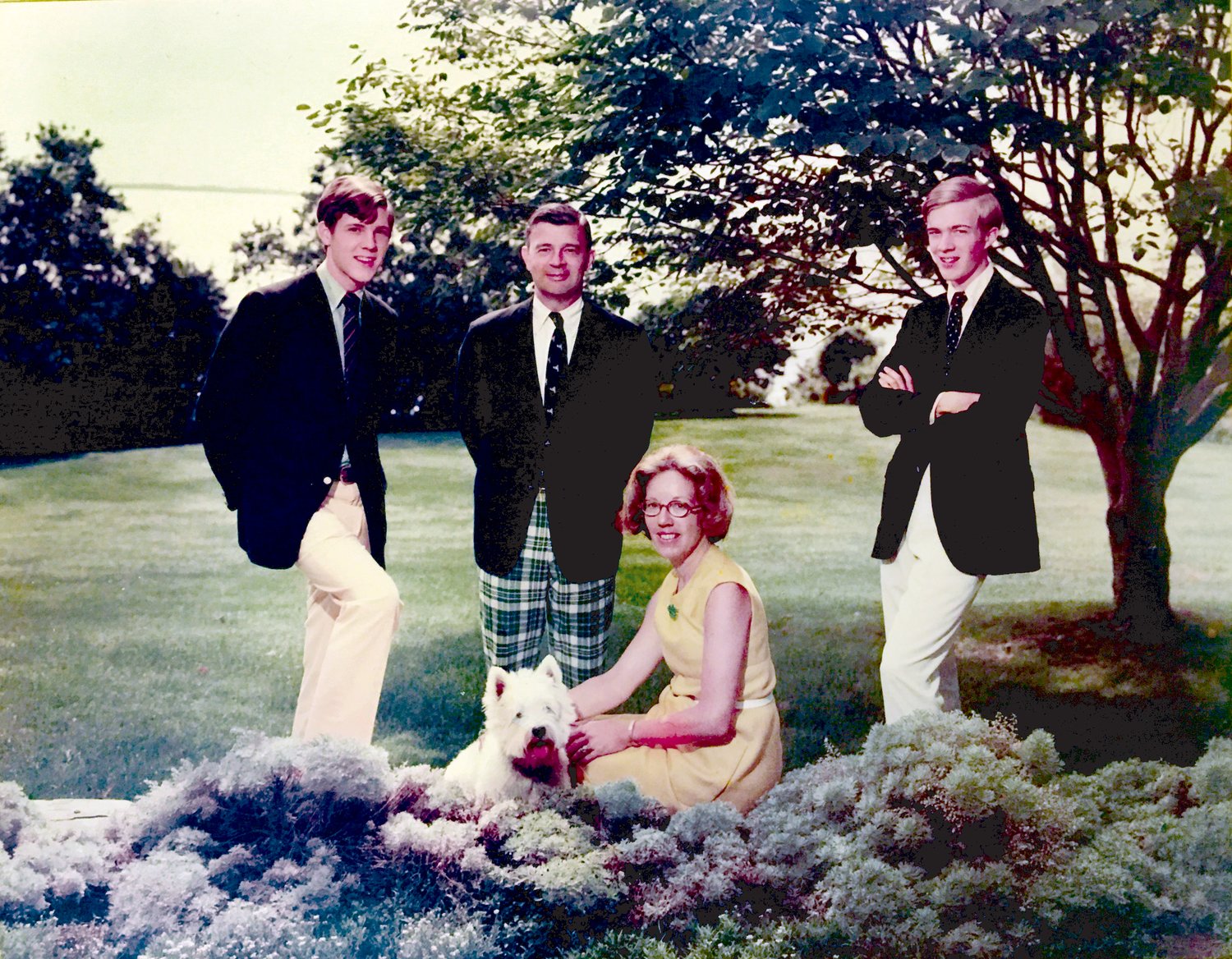 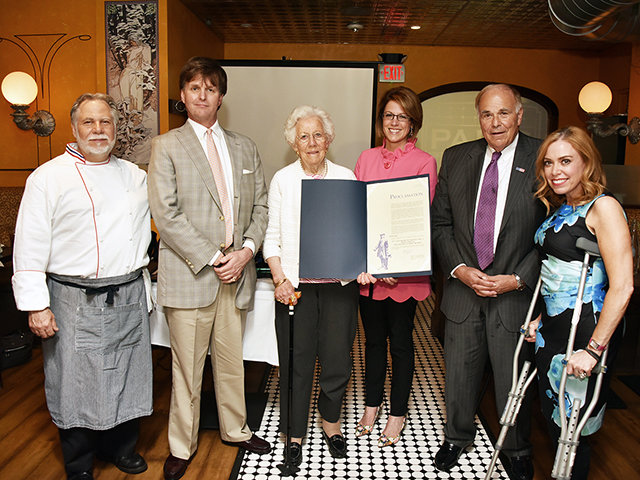 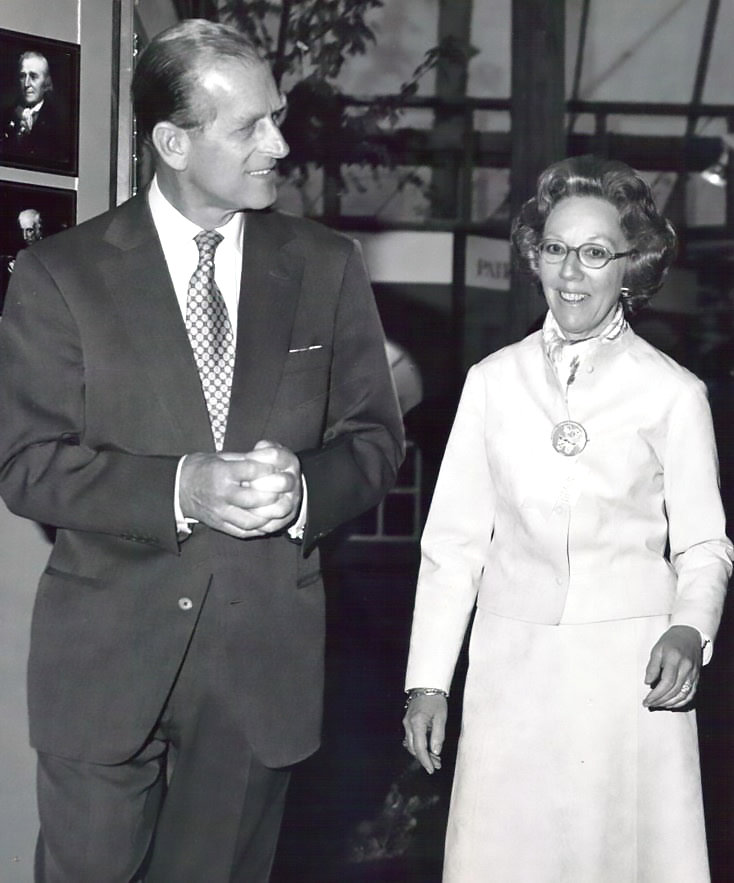 And since we’re all watching The Crown right now, Here’s our intrepid Dottie Sheffield making her debut at the Chelsea Flower Show, where Prince Philip is paying homage to her. May 1989
Previous Next
Posted Thursday, September 30, 2021 10:00 am
by Carla Robinson

Chestnut Hill lost one of its most important and influential civic leaders last Tuesday when Dorothy “Dottie” Sheffield died at her home at Cathedral Village in Roxborough. She was 96 years old.

Dottie founded, led or supported many of the neighborhood’s civic organizations, and was the person most responsible for its current reputation as one of the most charming “garden district” neighborhoods in the country. She was a beloved friend to many, and was widely known for her wit, loyalty and strength of character, and her staunch support for Chestnut Hill.

“She loved Chestnut Hill, and she loved aesthetics, especially flowers, and she would do anything she could to advance those two causes that were so close to her heart,” said her son, Win Sheffield. He said his mother maintained her brightness of spirit right up until the end, did not suffer pain and that her passing was peaceful.

“I think she just recognized that it was time to move on,” he said.

A graduate of the Parsons School of Design, Dottie was a trained interior designer with impeccable taste. That, in addition to her fierce sense of civic duty, led to her to found, with the assistance of her daughter-in-law, Carole Sheffield, Esquire, the Chestnut Hill Garden District Fund, the organization that is responsible for the neighborhood’s garden-like appearance.

It was in 1997, and Germantown Avenue was beginning to show signs of wear. So she and Richard Snowden, a close family friend who owns and developed a large number of properties along the commercial corridor, teamed up to do something about it.

They gathered a prestigious Board of Directors, raised some money and went to work. The first job they tackled was the Baptist Church at the top of the hill, where they planted the grounds, fixed the clock and installed outdoor lighting. And now, 24 years later, you can see her style there every Spring.

“Dottie’s favorite color was yellow, and her signature colors were yellow and white,” said Emily Daeschler, current president of the Chestnut Hill Garden District Fund. “And every Spring, that garden blooms all yellow and white.”

The organization grew into a civic powerhouse, and now maintains several parks and does annual planting along the mile stretch of Germantown Avenue. It also manages all the hanging baskets, 92 barrels and plants, and 36 storefront window boxes.

Will Detweiler, a close friend who served with Dottie on some of those boards over a period of about 50 years, described her as extraordinarily gracious, and totally dedicated to the community.

“Believe me, she was somebody to be emulated,” Detweiler said. “She didn’t have to do half the stuff that she did. She did it out of dedication, and love.”

Detweiler always admired Dottie for her integrity and her straightforward manner, he said, and “while some people may not have always agreed with her, everybody respected her.

“When you get into community service you can get into all kinds of little scraps, and people can be petty sometimes,” he said. “But you always knew where you stood with her. Whenever I needed advice about anything, she was the number one person I went to. She would give it to you straight.”

Dottie also befriended and mentored a subsequent generation of civic leaders, recruiting capable people to take on positions she was ready to vacate.

“She was a visionary, really, and also a force of nature,” said Diane Hanson, current president of Bird-in-Hand consignment shop, which Dottie founded in 1976 in order to raise funds for her garden initiative.

From the beginning, the shop was a rousing success, and the enterprise incorporated as a nonprofit in 1981. Over the 47 years of its existence, the shop has raised and donated more than $1 million to various community organizations.

“She was an institution. And she was formidable,” said Emily Daeschler, “You stood a little taller when you were talking to her. You wanted to show her your best self.”

Emily first met Dottie in 1996 when she joined the Random Garden Club, which was another significant Chestnut Hill organization where Dottie was yet again, one of the founding members.

“She was one of a bunch of ladies who would march into storefronts and tell the owners they could only choose colors from a certain palette, or that they couldn’t put up any neon signs,” Daeschler said. “Not everybody agreed with that. But to her credit, she really made Chestnut Hill into this gem of a place.”

Dottie was a passionate gardener, recognized as an outstanding horticulturist and flower arranger, and was a sought-after judge for both. She twice took her skills at flower arranging to England’s Chelsea Flower Show, where in 1988 she became the first American to win a blue ribbon.

She was also known for her great sense of personal style, and frequently dressed in strikingly colorful and tasteful suits and scarves. “She always looked so elegant, just perfectly put together,” said Emily.

Once, while at the Opera at Lincoln Center in New York City, someone turned to her and remarked upon her magenta color scheme by saying: “Your lipstick and your jacket, they match perfectly.’ Dottie didn’t miss a beat when she responded, dryly, “That’s how we do things in Philadelphia.”

Dottie grew up in Mt. Airy on Elbow Lane and attended Springside School, graduating in 1943. She met and married Ed Sheffield in 1950, and moved to their Chestnut HIll house at 225 Rex Ave.

Ed Sheffield was from Newport, Rhode Island, and in 1960 the couple built a house in nearby Middletown, which also became a showplace.

“Any house she ever lived in was an aesthetic achievement, and this house was no exception,” said Win Sheffield, who spent summers there as a boy along with his brother, David Sheffield. “She did all the decorating and gardening, and made it into something very special.”

In 1976, Ed Sheffield helped to found the Cathedral Village retirement community in Roxborough, and was one of the founding board members. Dottie and Ed moved there together in their early 80’s, and were joined by a number of their contemporary friends.

“One of the great pleasures for me in coming to visit my parents at Cathedral Village was not just that my dad had helped to found it, but that walking down the corridor I would see the people who had driven me to elementary school,” he said. “I was also struck by the fact that she had many friends of my generation who constantly visited her over the years.”

But perhaps most of all, Win Sheffield said, he appreciates his mother’s zest for life.

“There’s no time like the present. That’s a lesson I learned from my mother,” he said. “If there was a choice of doing something now, or doing it two minutes from now, the answer was always to do it now.”

Mt. Airy lawyer, a warrior for justice, dies at 96