'Bird in Hand' in its Chestnut Hill nest for 42 years

'Bird in Hand' in its Chestnut Hill nest for 42 years 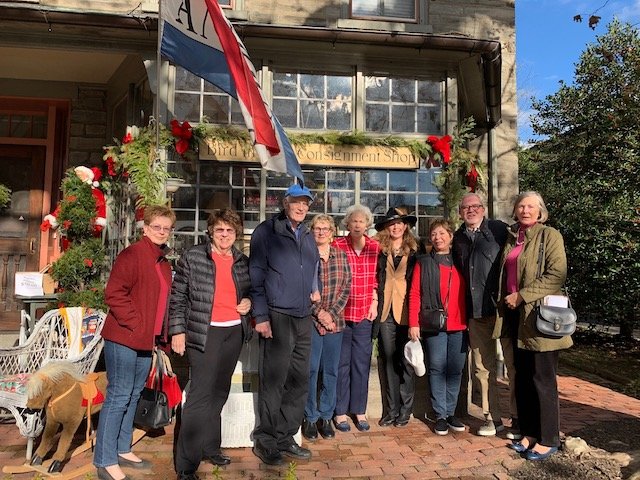 Jewelry, decanters, lamps, paintings and prints, fine china, pottery, small furnishings, porcelain figurines and many other unique items of high quality and sentimental value can be found at Bird in Hand Consignment Shop in Chestnut Hill.

The shop is one of the town’s institutions, around since 1976, and situated at its highly visible location at 8419 Germantown Ave. (across the street from Weavers Way) in Chestnut Hill since 1987. (From 1976 to 1987 it was located on Highland Avenue.) The difference between this establishment and others of its kind is Bird-in-Hand’s nonprofit status.

According to an article in the Local in July, 2016, the organization had donated more than $1 million to local charities in its first 40 years. One of the first recipients was the Chestnut Hill Garden Club and its town beautification program.

And over the past two years, major renovations have been accomplished at Bird in Hand, and additional groups have been added to the roster of recipients, including Team Children, which restores old computers and donates them to schools, and the Quintessence Theater, a classical repertory theater at 7137 Germantown Ave.

Morning Circle Media, which runs an author-illustrator program to promote bi-lingual early literacy, is another recent recipient of profits made at Bird in Hand.

“We have overseen the rebirthing of this nonprofit that has been around for a long time, rejuvenating it,” says Sandra Patty, a long-time volunteer with Bird in Hand who served as a board member and was appointed executive director in June, 2017. All positions at Bird in Hand are staffed by volunteers — about 18 in all, some who have been with the shop for 30 years or more — except for two part-time shopkeepers, an accountant and a bookkeeper who are paid.

Patty, a Mt. Airy resident, helped the nonprofit regroup. She brought in computers, added email capabilities, started a website that should be finished by June and instituted a computerized process for tracking inventory and consignees. She also has led the board to narrow its focus when designating groups that will receive donations.

“Art, education and culture are the goals,” she says. “We don’t make a lot of money, but we want our money to make a difference and honor our commitment to the community.”

The 400-square-foot shop is chock-full of treasures brought in by a variety of consignees. “Many who come in have beautiful things, have inherited collections or are moving and want their possessions to continue to live, to be admired and appreciated,” she explains.

Items remain in the shop for two months and if sold, the proceeds are split 50/50. If an item doesn’t sell in that time, the consignee may either pick it up or donate it to Bird in Hand.

The unique nature of this shop and the more than 3,000 items within it cannot be overstated, according to Chuck Bentham, a Wyndmoor resident who shopped regularly at Bird in Hand for nearly a decade and now serves on its 10-member board. As a retired Philadelphia homicide detective who has extensive knowledge of security systems, Bentham advised the board to install security cameras, which is how he got his start there.

“I wanted to devote some time to making a difference in the community,” says Bentham, who has both consigned items and bought them over the years. “When you walk in there, you’ll find all kinds of things,” he says, mentioning a pair of World War I-era field glasses. Some of his favorite finds are the copper pans and glass wine carafes for his gourmet kitchen. A postcard, dated 1961 and signed by Prince Rainier and Princess Grace of Monaco, is now framed and hangs in his home.

“Everyone needs gifts,” said Patty, “and when you buy from Bird in Hand, you’re also giving back to the community, which is a big deal. It’s also a fun place to shop because there are always new things.”

Bird in Hand is open Monday to Saturday, 10 a.m. to 5 p.m., and Sunday, 11 a.m. to 4 p.m. To volunteer or donate to Bird in Hand, email birdinhandconsignmentshop@gmail.com