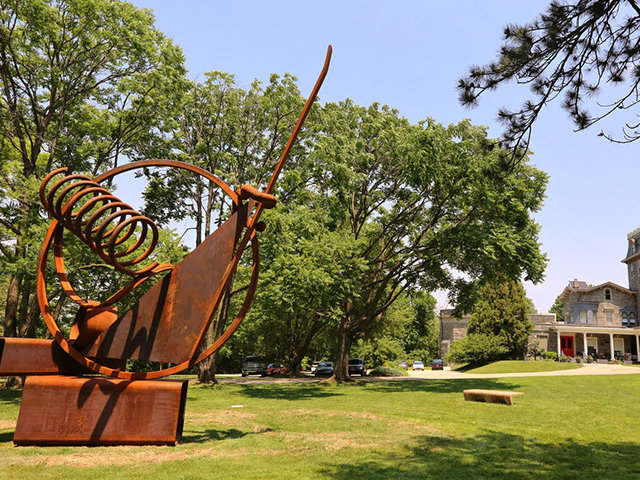 A sculpture on the front lawn of the Woodmere Art Museum.

The Woodmere Art Museum is partnering with the Chestnut Hill Conservancy for its “Discovering Chestnut Hill” series exploring architecture, landscape, and history through leisurely walking tours.

On Saturday, May 13, at 1 p.m., Woodmere director and CEO William Valerio will lead a tour of the museum’s public sculptures and grounds. Valerio will discuss the artists, how the artworks were made, and how Woodmere continues to celebrate Philadelphia’s art and artists in our beautiful Wissahickon landscape.

The newest addition to the Woodmere landscape is the monumental sculpture and fountain “Free Interpretation of Plant Forms” (1967), by the renowned American artist and designer Harry Bertoia (1915-1978). Originally commissioned by the City’s Percent-for-Art program, Bertoia’s fountain was installed in the central plaza of the Philadelphia Civic Center in West Philadelphia in 1967.

The sculpture was placed in storage in 2000 when the plaza and the adjacent buildings of the Civic Center were slated for demolition. The sculpture arrived at Woodmere in July 2016 and has undergone conservation on site. The sculpture is made through a process Bertoia invented in which he would bend commercially obtained copper tubing by hand and weld it together with a bronze alloy.

“Woodmere is thrilled to provide a home for Bertoia’s magnificent ‘Free Interpretations of Plant Forms,’ the largest and first of his hyper-organic, flowing sculptures,” Valerio said. “It has the presence of a gigantic, living creature that appears both wonderful and strange in its ‘protoplasmic’ vitality. This represents a turn in Bertoia’s career that many people don’t know.

“Like so many artists in the 1960s, Bertoia embraced nature as his inspiration and he adopted a ‘Zen’ approach to life. The Civic Center was a hard-edged, urban environment, and, by reframing the ‘Free Interpretation of Plant Forms’ as a centerpiece on Woodmere’s six green acres in Chestnut Hill, we are changing the way it is experienced. Visitors will be able to walk right up to it and feel the way it ‘speaks’ to nature.”

Woodmere is also proud to be the home of “Spring & Triangle” (2016), a monumental sculpture by Dina Wind (1938–2014) that has been enlarged to almost 10 times its original size—from 37 inches to 30 feet. This massive enlargement of a maquette of 1986 fulfills the late artist’s aspiration to realize her sculpture on a monumental public scale.

“Spring & Triangle” is designed to interact with the monumental trees and the natural environment of Woodmere’s historic landscape, as it is sited on the museum’s front lawn. As a sculptor, Wind worked primarily in scrap metal, welding items, including car bumpers and old farm tools, into dynamic abstract compositions that she described as three-dimensional drawings in the air. The elegant playfulness of her sculpture challenged the raw origins of her source material.

“With the installation of the larger-than-life Spring & Triangle, we fundamentally transformed Woodmere’s landscape and reinterpreted our outdoor space, which is among the few great estates of 19th-century Philadelphia that is an open public space,” Valerio explained. “Wind’s sculpture offers a magnetic experience that engages our visitors’ creativity and interacts with the gracious, green environment of Chestnut Hill.”

Both “Plant Forms” and “Spring & Triangle” are larger than any other works on the Woodmere grounds and are transformative by virtue of their monumental scale, in creating a dialogue with the museum’s grand, natural setting. Woodmere’s goal is to revitalize its founder’s vision of a great museum that inspires creativity by bringing art and nature together.

In addition, Woodmere has addressed the stormwater issues on its historic property. The museum’s new parking lot includes permeable, state-of-the-art, stormwater management elements as well as underground tanks, an infiltration pond, a bioswale that filters and removes pollutants, step pools (under construction), and a new link to the city’s stormwater sewer. Additional native trees, plants and shrubs are being planted to also help reduce runoff and create a beautiful green environment.

All of the sculpture and environmental enhancements are being integrated into Woodmere’s education program that serves thousands of students each year. Woodmere plans to offer education experiences not only for visiting students but also for families and adults, using art as the launching point for discussions about preservation of nature, water management, and the interface between man and nature. A new map of experiences with outdoor sculpture at Woodmere will be available shortly, as will guided tours by Woodmere’s curators, educators, and experienced docents. Valerio is delighted to guide the first outdoor sculpture and ground enhancement tour on May 13 for the Chestnut Hill Conservancy event.

To make reservations, visit the website or call 215-247-9329, x202. (It is likely to sell out in advance). The program is generously sponsored by the Chestnut Hill Conservancy’s 50th Anniversary Presenting Sponsor, the Nottingham-Goodman Group of Merrill Lynch, as well as Dennis F. Meyer Inc., Eagle Rock Management, Matthew Millan Architects and Old Village Master Painters.