Chestnut Hill East line grade crossing at Mermaid Lane as it appeared in 1929, just before the crossing was eliminated. The house at 206 E. Mermaid Ln. is visible to the right. (Photo courtesy of … 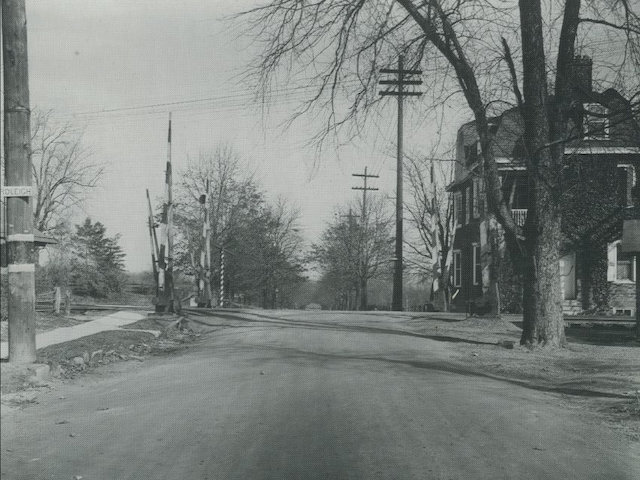 Chestnut Hill East line grade crossing at Mermaid Lane as it appeared in 1929, just before the crossing was eliminated. The house at 206 E. Mermaid Ln. is visible to the right. (Photo courtesy of Chestnut Hill Conservancy)

In the 20th century, both lines underwent grade separation programs to remove all crossings along the lines. This caused much more disturbance along the rights of way, which were much more densely developed by then. The Pennsylvania Railroad eliminated grade crossings on the Chestnut Hill West line in 1918; the Reading Railroad did the same for the Chestnut Hill East line in 1930. These changes required moving massive quantities of rock and fill.

In Chestnut Hill, evidence of changes made to the surrounding landscape as a result of the 1930 project is particularly noticeable along the railroad tracks between Gravers station and Mermaid Lane. Shown here is a November 1929 view of the grade crossing of the Chestnut Hill East line at Mermaid Lane. The view is facing northeast toward Stenton Avenue. The grade crossing at this location was eliminated by raising the railroad tracks and subsequently lowering the surrounding area. The house at 206 East Mermaid Ln. – visible to the back right in the photograph – shows the magnitude of the grade change.

If you find yourself in the area, the door to this house was once accessible at ground level. The removal of tons of fill adjacent to the house to lower Mermaid Lane, however, left the door high above the new grade. One now has to access it by a set of stairs, with the home’s stucco wall showing those portions of the house formerly existing below grade. The long stone retaining wall in front of the United Cerebral Palsy center at 102 E. Mermaid Ln. was made several feet higher, to accommodate the lowering of Mermaid Lane.

Other examples of these changes can be found along both railroad lines throughout Chestnut Hill. Would you like to learn more? The Chestnut Hill Conservancy is launching its year-long program series “Railroads of Chestnut Hill” this spring. Topics will include, but are not limited to, the history and preservation of our railroad stations, the history of the railroads themselves and their rights of way. Join us on April 28 for a walking tour exploring the hidden landscape of the Reading Railroad, and later this spring for a lecture about how the railroad came to Chestnut Hill. For more information and to buy tickets, please visit chconservancy.org/discovering-chestnut-hill or email info@chconservancy.org

Together with our community champions: Looking back at 2020 for the Chestnut Hill Conservancy