Discover Chestnut Hill: Explore the Andorra Natural Area, a forest like no other

Discover Chestnut Hill: Explore the Andorra Natural Area, a forest like no other 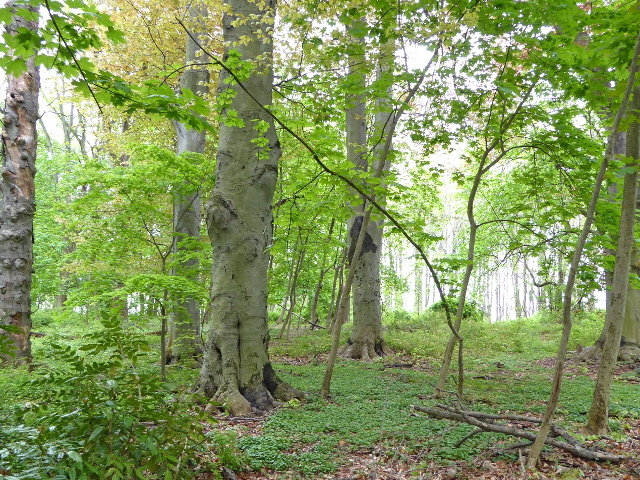 Remnants of an allée of European beeches planted by Richard Wistar in the late 1850s can be seen today among regenerating natives. (Photo by Edward Sibley Barnard)

by Edward Sibley Barnard for the Chestnut Hill Historical Society

A walk through the Andorra Natural Area is a walk through time. Once it was part of Penn's Woods, the astonishing grant of 28 million acres to William Penn by King Charles II in 1681. In the 17th century it was a rich forest of native trees, such as American chestnut, sycamore, beech, black tupelo, sassafras, hemlock, various oaks, maples, elms, birches, and a few other species – perhaps around 40 or 50 altogether.

Then European farmers arrived. They established small holdings and cut down many of the trees. Eventually, around 1740, a farmer built a stone barn and farmhouse where the nature center is located today. Wissahickon Creek was becoming dammed in an increasing number of places to supply power for mills. Yet portions of the original forest clung to the steeper slopes. Enough of the valley's wild character remained in the early 19th century for it to become famous for its rugged, picturesque beauty.

As wealthy citizens built summer estates nearby, Richard Wistar, son of physician Caspar Wistar, purchased a plot near the end of Wissahickon Drive in 1857 and named it Andorra, after the republic founded by Charlemagne in 805. He planted a number of beeches, some in allées which still remain, but he never built the house to which the allées were to lead.

Wistar sold his property to Henry H. Houston in the 1860s, and Houston, a wealthy railroad magnate who was developing the west side of Chestnut Hill, decided that Andorra was an excellent place for a nursery to supply plantings for the nearby garden suburb, which was changing from a summer resort to a year-round community.

In 1891 Houston hired William Harper as business manager of the Andorra Nursery, and upon Houston's death, Harper purchased the business and leased the land from the Houston Estate. An astute business man and very knowledgeable plantsman, Harper built up the business, adding property and expanding inventory until his death in 1934, when Andorra was the largest commercial nursery in the East.

After the end of World War II, however, much of the nursery's property was sold for development, and the business closed. The original tract, now the Andorra Natural Area, remained in the Houston Estate and was eventually donated to Fairmount Park. This bit of the Wissahickon forest contains an amazing mixture of exotic trees cultivated by Harper's gardeners over the years and also some native trees.

On Sunday, Oct. 16, I will lead a tour of the Andorra Natural Area, part of the Chestnut Hill Historical Society’s “Discovering Chestnut Hill” walking tour series. On our walk we will try to pick out and identify the many trees species planted by the Andorra Nursery and distinguish them from native species. We will count the total number of species packed into this small area – more than were there when Penn's colonists arrived – and we will speculate about the future of this very special forest. Are the exotics naturalizing? Are the natives regaining ground? How is the ecology of this unique area changing?

To make reservations, go to www.chhist.org/walking-tours or call 215-247-9329 x 202 (it may sell out in advance). This program is generously sponsored by Halstead Roofing and Valley Green Bank.

Edward Sibley “Ned” Barnard is a writer and editor, who moved to Chestnut Hill with his wife from Manhattan seven years ago. He has edited dozens of books on natural history and has written or co-authored eight books including “New York City Trees,” “Central Park Trees and Landscapes,” and the forthcoming “Philadelphia Trees” co-authored with Paul Meyer and Catriona Briger (May, 2017; Columbia University Press). He bicycles frequently along Forbidden Drive.