GA’s high scorer, senior Olivia Doody, handles the ball behind the goal while looking for a teammate to make a cut out front. (Photo by Tom Utescher)[/caption] by Tom Utescher The roller coaster … 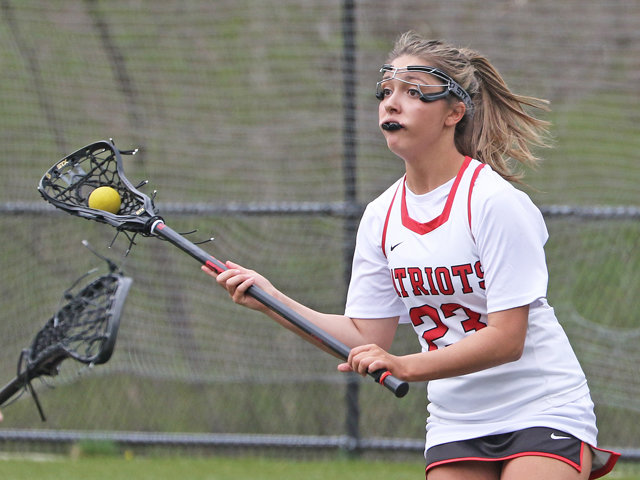 GA’s high scorer, senior Olivia Doody, handles the ball behind the goal while looking for a teammate to make a cut out front. (Photo by Tom Utescher)[/caption]

The roller coaster ride in girls’ lacrosse continued for some area teams as the end of April approached, and the Germantown Academy and Penn Charter squads demonstrated that the results of previous games were not necessarily accurate indicators of how the teams would play on a given day.

Head-to-head, the Patriots and Quakers proved very closely matched back on April 11, when host GA edged Charter, 9-8. Not long before that, each team had its first Inter-Ac League encounter with the Academy of Notre Dame, last year’s third-place squad.

The Pats gave the Irish a good run before succumbing 13-11, but in its next game, Notre Dame handled PC relatively easily, 13-6. The Irish then clinched their first win (12-11) in a number of years over the two-time defending Pennsylvania Independent Schools champion, Agnes Irwin.

In the middle of last week, Germantown and Charter both took on Irwin, and this time it was the Quakers who made a significantly stronger showing against a top-three team in the league.

Although playing on the road last Tuesday, the Quakers were within four goals of the Owls at the intermission, and then they halved that deficit in the second period before succumbing, 14-12. GA got to play on its home field against Irwin on Thursday, but found itself down by a dozen at halftime before the Main Line school wrapped up a 20-5 victory.

After challenging AI on Tuesday, PC was back on the road on Thursday, making a longer trip out to Pottstown to knock off Hill School, 9-8. For both games, PC was missing an ailing Kaylee Dyer, a high-scoring sophomore, and the Quakers were also lacked a few other players who were preparing to perform in the upper school spring concert.

Junior Leah Sax, who’d been out with an injury earlier in April, has returned to the field in top form; she led the scoring effort against the Owls on Tuesday with five goals and one assist. Freshman Darcy Felter added three goals and sophomore Mia Ferraro found the net twice.

In the PC goal, junior keeper Hayley Hunt chalked up 12 saves, and she stopped 11 shots two days later at Hill School. There, the Quakers received two goals apiece from Felter and freshman Maddie Shoup. A third player with two markers was junior Vanessa Ewing, who arrived at Hill a bit late due to a school conflict, but got right down to work. 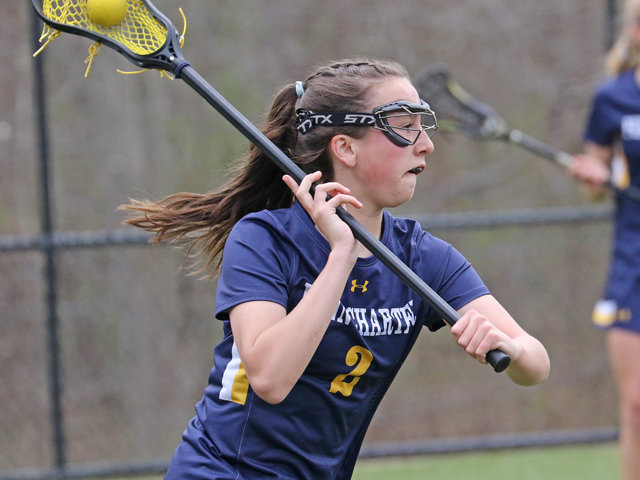 Still only a freshman, Darcy Felter scored three goals for Penn Charter in a close loss to powerful Agnes Irwin last week, then put in a pair during the Quakers’ narrow victory over Hill School two days later. (Photo by Tom Utescher)[/caption]

O’Hara is currently led by Jen Duckenfield, the coach who had built AI into a southeastern Pennsylvania power. GA would face the Owls themselves on Thursday. This wasn’t great timing as far as GA was concerned; after the close call against PC and the earlier loss to Notre Dame, Irwin was likely looking to make a strong statement before taking on league leader Episcopal Academy on the last day of April.

The Owls’ roster includes two players whose older sisters engaged in different sports at Mount St. Joseph Academy. Senior tri-captain Emily Wills is the younger sister of Sarah Wills, who was a starter for the Magic in basketball. Back in grade school, current AI sophomore Jordan Healy used to take her goalie stick with her down to Kelly Drive to watch older sibling Karsen row for the Mount.

Wills, who would pile up a game-high five goals and five assists on Thursday, got AI on the scoreboard a little over two minutes into the action, and the Owls scored three more times over the next five minutes. Just over 10 minutes into the contest, sophomore defender Caroline Antonacio broke the ice for GA.

The home fans would have to wait a long time for a second Patriots goal, though, as Irwin proceeded to a 13-1 halftime lead and then put in the first goal of the second period, as well.

Officially, sophomore starter Paige Crowther made three saves in goal for the visitors in the first half, and Healy had two saves in the second. In addition to that, a number of GA shots were knocked down by Owl defenders. The Patriots’ Torrey would finish with nine saves.

Eight minutes into the second half, Doody scored for GA off an assist from senior classmate Charlotte Rapp. After Irwin answered to make it 15-2, the Patriots put together their best stretch of offense all game. They made quick passes inside the arc to make it difficult for defenders to follow the ball (as Irwin did all day at the other end), and produced three goals in a row. Seniors Rapp, Doody and Cammy Korman were the scorers as the home team got back within 10 of the leaders (15-5) with 10 minutes remaining in the game.

Irwin drew away again in the final phase of the contest, coming away with a 15-goal victory. Following Wills on the Owls’ scoresheet were sophomore Brynn Ammerman, with four goals, and junior Natalie Korkran and freshman Marissa White, each with a hat trick.

Doody drove the Patriots’ offense with five goals, and there were hat tricks for both Smigiel and Van Blarcom, as nine different players penetrated the Warriors’ goalcage. Torrey turned in eight saves for the victors. PC recorded 13 saves in goal for Hunt, while at the other end Sax scored three goals and Ferraro fired two.