Doug Hara is the Tinman, and Leigha Kato is Dorothy in this wonderful revival of the “Wizard of Oz.” (Photo by Linda Johnson)[/caption] by Hugh Hunter Bring your children and relive your … 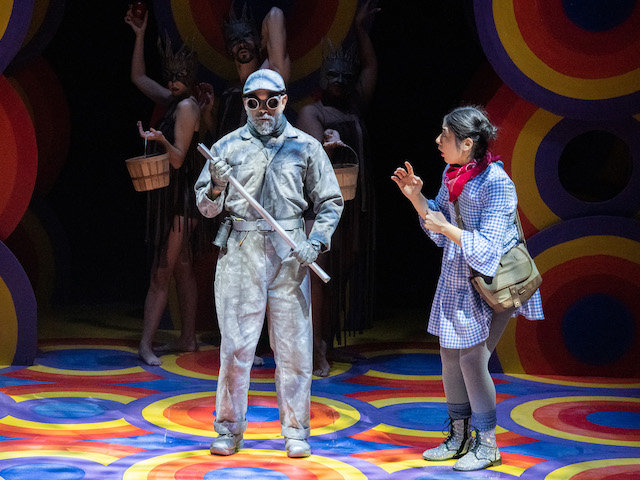 Doug Hara is the Tinman, and Leigha Kato is Dorothy in this wonderful revival of the “Wizard of Oz.” (Photo by Linda Johnson)[/caption]

Bring your children and relive your childhood in the delightful holiday season revival of “The Wizard of Oz” now running at Quintessence Theatre. Based on the 1987 adaptation by John Kane for the Royal Shakespeare Company, the stage turns into a land of enchantment.

As a kid, I read a lot of Frank Baum’s “Oz” books. I vividly remember sitting on my front stoop when I was 10, consoling myself with the thought that Dorothy Gale was a 12-year-old child, so I still had time for something magical to carry me off to a more interesting place.

This show takes you there. Artistic Director Alex Burns told us that Quintessence “broke the bank” with this production, and I believe him. They brought in acclaimed designer Brian Sidney Bembridge to do the dazzling set and lights, mixing in dramatic bursts of smoke. The character defining costumes by Kelly Myers and musical direction of Tom Fosnocht sparkle.

Kane’s script tracks the 1939 Judy Garland movie, and most of Harold Arlen & E.Y. Harburg’s songbook is intact. One notable exception: this score includes “Jitterbug,” cut from the screen version because its gaiety lessened the dark drama of the finale. Here, it gives choreographer Adrienne Maitland the chance to bring the cast on stage for the night’s most spirited dance number.

The show is so jumping with life that ensemble actors are as prominent as the “stars.” Chloe Mollis McBride is the balletic “Cyclone,” Michael Liebhauser is Oz’s Gatekeeper, and Jessica Money is the Winkie General. But in addition to these cameos, we see them all night in flash, supernumerary roles – crows, hooded specters, monkeys, enticing apple trees. Their surprisingly poignant version of “Ding Dong the Witch is Dead” drew an ovation.

Donate now to CH Local
The Latest
Mistakes were made
One of the things I’d like to do more in this space is give readers some behind-the-scenes takes about what happens at the Local. In talking to people, I regularly come to understand that the …
SCH Academy marks Black History Month with virtual visit from Senator Cory Booker
Deftly bridging the virtual distance to engage his audience, New Jersey Senator Cory Booker, kept over 250 members of the Springside Chestnut Hill Academy community spellbound as he spoke …
Chestnut Hill Hospital to host virtual talk on gut health
What’s upsetting your digestive system? Learn healthy tips and recipes to keep your digestive system working smoothly during a virtual session with Asyia Ahmad, MD, gastroenterologist, on Thursday, March 4 at noon.