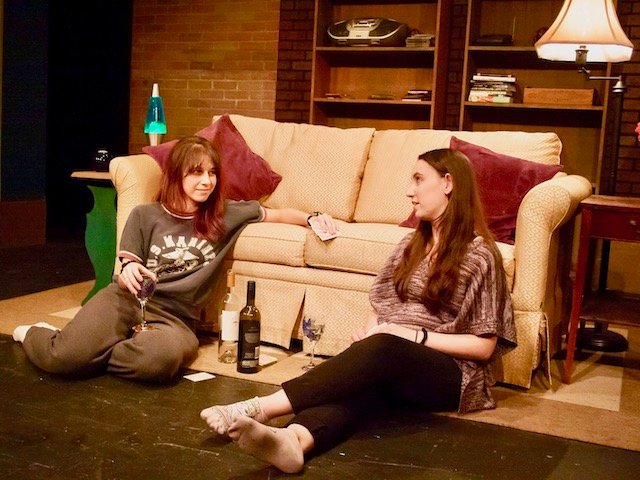 Now running at Allens Lane Theater, “Stop Kiss” (1998) is formally about the emerging gay consciousness of two young women. At the same time, this daring work by Diana Son takes on larger scope.

Two struggling women in their 20s have migrated to New York City with the vague idea of starting new lives. Callie (Emily Addis) is a 29-year-old traffic news reporter who spends her day in a helicopter reporting for news radio on the movement of cars she is too poor to buy. Addis is winning in the star role. Sensual and charmingly nervous, her Callie is in constant motion as she strives towards an uncertain end.

Sara (Kelci Schlierf) has just relocated from St. Louis to work as a third grade schoolteacher in the Bronx. We meet both women in the first act when Sara brings “Caesar” to Callie for safekeeping because she cannot keep her pet cat in the apartment she shares with other friends.

Immediately, you wonder why they are so stilted and tentative in each other’s presence. In the next act you begin to learn why. It is two months later and Callie visits Sara, who lies in a coma in St. Vincent’s Hospital in the aftermath of a streetside gay bashing.

Under co-directors Leigh and Lauri Jacobs, “Stop Kiss” is a 100-minute show played without intermission, and there are no less than 23 scene changes. Most take place in Callie’s apartment. At center stage, a large couch dominates the scene, a jumble of odds and ends with more possessions hidden under cushions. It is a core image that describes Callie herself, a curious mix of focus and disorder (set design, Sue Abla).

As the play moves back and forth in time, you learn about a slowly emerging romance. Both women have ex-boyfriends who linger in their lives. Callie and George (Eric Rupp) have been backstop sex partners for years; both date other people. Sara used to share an apartment in St. Louis with Peter (Ryan Henzes), who now visits her in the hospital.

But these relationships lack spark and only inhibit the women. Although “Stop Kiss” is a gay romance story, it is equally about the young in general who must fight to find their identity. And this more general struggle for self-becoming in an indifferent world begins to feel as vital as the play’s formal theme.

“Stop Kiss” is also a magnificent portrait of the strange anonymity you feel in New York City. Detective Cole (Ray Proietti) is brutal in his disinterest in the women’s suffering. But both neighbor Mrs. Winsley (Lauri Jacobs) and Nurse (Jo Johnson) see these young women more clearly than they can see themselves, prompting them towards a kind of “happy ending.”