DAILY DOSE: SEPTA: Trolleys on Route 23 – at least 11 years away

DAILY DOSE: SEPTA: Trolleys on Route 23 – at least 11 years away 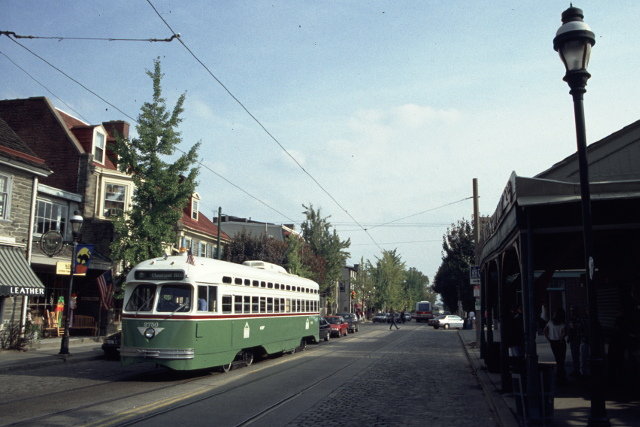 The Route 23 trolley in Chestnut Hill.

Recent news that SEPTA planned to purchase new trolley cars prompted some to wonder whether the new cars might revive the Route 23 trolley, which runs along Germantown Avenue in Chestnut Hill to South Philadelphia.

A recent interview with a SEPTA spokesperson revealed that anyone waiting for trolley cars along Germantown Avenue will be waiting for quite a while.

SEPTA plans to launch a study in 2020 to assess the current status of Routes 23 and 56 and projects that it will last until 2026. The study, “budgeted at $2 million,” will reveal the future of the 23 trolley.

“Route 23 – the 90s route – has been on hiatus, if you will, and we want to take a look at that to talk about potentially restoring them,” said Manny Smith, public information manager for SEPTA’S media relations team.

Route 23 was once the longest streetcar route in the world (and quite possibly the most nostalgic), cruising from South Philadelphia through center city, traveling north on Germantown Avenue through North Philadelphia, and finally arriving home in Chestnut Hill, before SEPTA “temporarily” suspended the service in 1992 and replaced the electric trolleys with diesel buses.

Changes to Route 23 affect an average daily ridership of 23,000 riders, counted as they get on the buses at any point along the entirety of the route.

“SEPTA deemed the replacement temporary and then claimed the service would be restored as soon as new cars could be ordered, with a target date of 1997,” according to a July 2011 story by WHYY’s Newsworks.

Eighteen years later, we’re still more than a decade away from even the possibility that trolley cars will return.

Route 23, soon to be split into Routes 23 and 45, will remain a bus route until the end of the study when “there could be a shift in consideration about rail at that time,” said Smith. Until then, answers remain elusive for the impatient and scant for the curious.

Meanwhile, questions loom. In a modern environment can rail vehicles operate in an efficient manner? What kind of infrastructure is needed for rail restoration? What type of vehicle will be best? What best suits the riders’ needs? How much would it cost?

“Once the study starts, it will answer all of these questions,” Smith said.

In the interlude, SEPTA’s Rebuilding For The Future Program, which aims to provide safe, reliable service, while enhancing the travel experience for current and future customers, is currently pursuing track reconstruction and improvements on other trolley routes in the city: routes 10, 11, 13, 15, 34, 36, 101 and 102 in order to bring the trolley program up to speed.

SEPTA is currently exploring if and how they can integrate newer vehicles into the already-existent, older trolley system. The modern streetcars are longer and what SEPTA calls “articulated,” or having sections connected by flexible, accordion-like joints so that more people can ride on one vehicle.

“If we did that, we will probably need to look at making some street and infrastructure improvements again,” Smith said. “We would potentially need to build sidewalk cut-outs, and restrict parking in a little bit more places than it is already.”