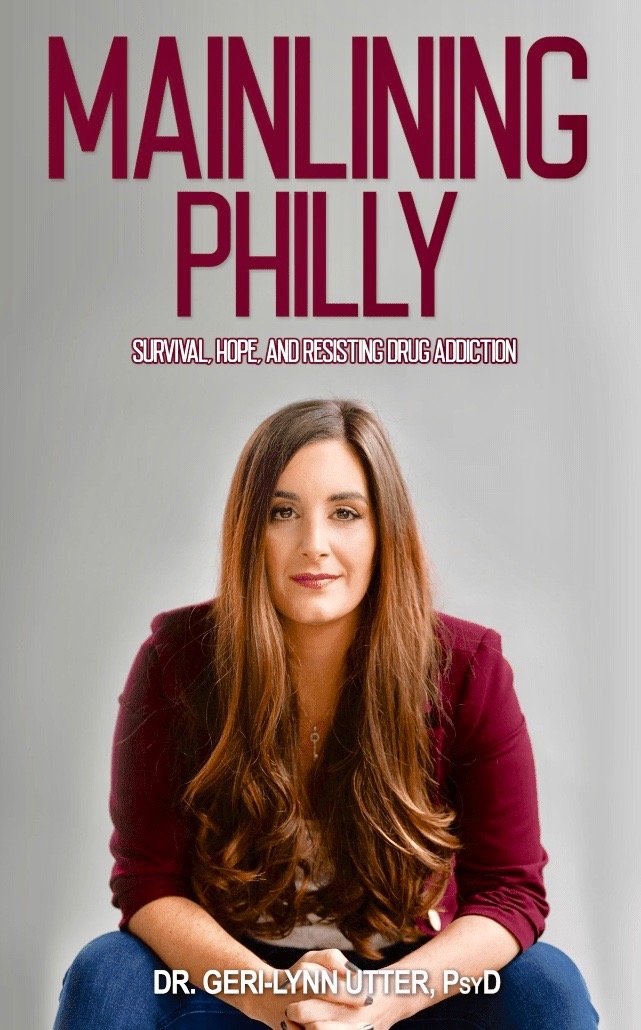 Geri-Lynn Utter, who earned Master's and Doctorate degrees in clinical psychology from Chestnut Hill College, has recounted her personal history of growing up with drug-addicted parents in a new autobiography, “Mainlining Philly.”
Posted Friday, September 4, 2020 10:50 am
by Len Lear

Just about everyone is drawn to a story in which a victim of the most horrific abuse and deprivation overcomes those atrocities to not only become successful but also to help others who had suffered similar abuses. That's why Geri-Lynn Utter's life story is so uplifting.

Utter, 40, grew up in Kensington as an only child of drug and alcohol-addicted parents who abused her physically, mentally and emotionally. However, through hard work, intelligence and rock-strong character, Geri-Lynn wound up earning a BA in English/Communications at Cabrini College in Radnor in 2002 and both Master's and Doctorate degrees in clinical psychology from Chestnut Hill College. (She also worked in radio sales for 10 years while pursuing her graduate degrees.) Today Utter works for the Montgomery County judicial system, interviewing and evaluating the mental health of prison inmates to determine their suitability for possible release. She also works for a pharmaceutical company that has developed a drug that is said to minimize the deleterious consequences of opioid addiction.

Utter has recounted her personal history in an autobiography, “Mainlining Philly,” that was released in mid-April as an e-book digital download and is available at Barnes & Noble and on amazon.com. Hard copies will be available later this year. With the help of professional filmmakers, she has also helped to make a documentary film, "Utter Nonsense: Understanding Opioid Abuse and Mental Illness," which is scheduled to be completed by the end of October and will eventually, she hopes, be available online and used for educational purposes by colleges and medical schools.

“My parents both struggled with drug and alcohol addiction,” said Utter last week, “but as a child, you don't recognize it right away. My dad did a stint in jail. He was addicted to heroin and sold methamphetamine. His lifestyle influenced my mom. She was a hairdresser and was so depressed about what was going on that she started to drink. I was homeless for a while at age 4 when my dad was in jail. These things followed me through my life.

“From age 6 to 12 things were somewhat normal, but my mom would binge-drink for three or four days. She would drink and drive. There was a lot of domestic violence. My dad would beat her, and he was 6-foot-3, 250 pounds, and she was 110 pounds soaking wet, so she could not protect herself. He beat me a few times. They were both abused as kids themselves. They were actually compassionate to other people but not to each other. They tried to instill good moral values in me, although they didn't live any of it themselves.”

The addiction crisis keeps getting worse all over the U.S. A study conducted in 1999 showed the number of overdose deaths from opioids at three per 100,000 population. By 2017, the number of deaths had jumped to 14 per 100,000. Now, more than 130 Americans die every day from opioid overdoses.

How does Utter feel about the highly controversial notion of supervised injection sites which enable addicts to keep taking drugs but under supervised conditions? “In Canada they have helped with communicable diseases. In parts of Kensington you cannot walk down the street without seeing needles and feces in the street. Injection sites make sense, but knowing how an addict's mind works, they may not even go to the sites. I tell them, 'Let me know when you're ready, and I will be there for you.' You have to meet them where they are at. When they are not ready (to seriously try to get clean), they just won't listen to you.”

For three years Geri-Lynn has worked part-time for a Swedish pharmaceutical company that makes Zubsol, a drug that manages withdrawal symptoms for those trying to kick opioids. She provides clinical data to doctors that aid them in their prescribing decisions. For four years Geri-Lynn has also evaluated prisoners' mental health at the request of judges.

“Prisoners are the best people to learn from,” she said. “Working with them gives you such insights into the workings of the mind … My dad died 10 years ago from pancreatic cancer, which was made much worse by his addictions. My mom has not used opioids for two years, but she still suffers from depression and anxiety. We still have a relationship, although she thinks she was portrayed as a monster in my book. Everyone else who has read it thinks she was portrayed sympathetically. She is at my house three or four days a week.”

Geri-Lynn's husband, Greg, 45, is a former Division 2 basketball star who played for one year on the Washington Generals, the team that tours with the Harlem Globetrotters and almost always loses to them. He is now a health and phys ed teacher and soccer and basketball coach in the Abington public school system. The couple have two children, Greg, 9, and Natalee, 6.