Majok was chosen to deliver the commencement speech for the 2008 graduating class of Chestnut Hill College. (Photo courtesy of CHC) by Elizabeth Coady Michael Majok Kuch's languid voice and … 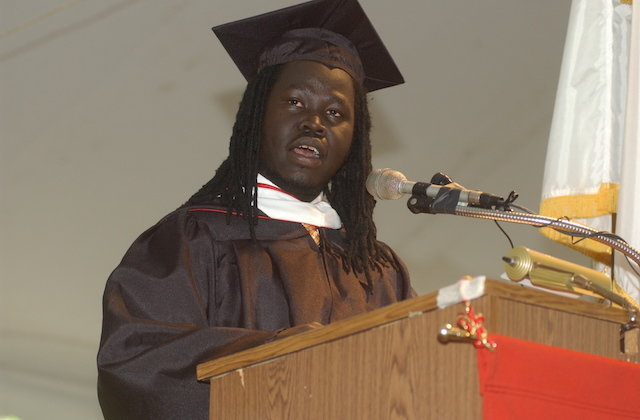 Majok was chosen to deliver the commencement speech for the 2008 graduating class of Chestnut Hill College. (Photo courtesy of CHC)

Michael Majok Kuch's languid voice and self-possessed air belie his “Lost Boy” legacy recounted in the 2016 book, “How Fast Can You Run.” With an 'Eagles' cap atop his head, he is sitting calmly across a table in a small coffee shop in West Philadelphia, where he recently moved while waiting to hear if he'll be accepted to a doctorate program.

Harriet Levin Millan's biographical novel tells the tale of how a five-year-old Kuch was separated from his mother on the night guerrillas razed his South Sudanese village, and his ensuing epic two-decade quest to find and reunite with her. He is among an estimated 40,000 Sudanese boys displaced by a bloody civil war that ravaged the African country from 1983 to 2005 and cost more than two million lives.

Kuch, born in the South Sudanese village of Bor, spent years in African refugee camps before gaining entry into the U.S. and resettling with four siblings in late 2000. The book recounts his first frantic hours surviving in a crocodile-infested bog, his eventual move through refugee camps, his arrival in a new country and his subsequent school years and struggle to find his parents.

Chestnut Hill and Germantown are the backdrop of his Philadelphia story. He spent his first few weeks in the U.S. housed at the rectory of St. Vincent De Paul's in Germantown, where for the first time in his life he slept in a bed with pillows and inside a house with electricity.

Initially enrolled in Germantown High School, Kuch was dissatisfied with what he saw there as an inferior educational setting. “I would see a lot of students, and I would try to talk to them,'' he recalled. “When I would ask them a question, I didn't get the impression that they were getting the best education.''

Determined to have the “best,” he parlayed his skill at soccer into a four-year scholarship at La Salle College High School (graduating in 2004) for both him and the four family members with whom he emigrated to the U.S. He followed that up with four years at Chestnut Hill College (CHC), where he also excelled at both his studies and soccer, graduating in 2008. After that he received his master's degree from Arcadia University. 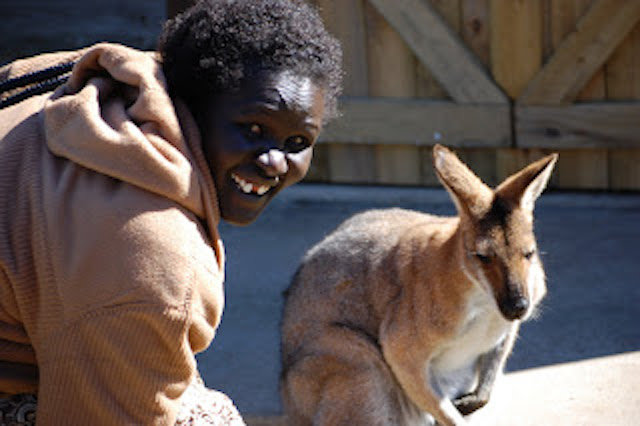 After two decades of not knowing whether his mother was alive or dead, Majok found her in Australia, where she is seen here enjoying the company of a baby kangaroo.

After school, he worked for Caruso's Market on Germantown Avenue — where Weaver's Way is now — to pay for his rent and expenses. Later he worked for American Brokerage Services, then owned by Brien Tilley, a Chestnut Hill businessman and former head of the Chestnut Hill Community Association (2012 to 2013), who became a close friend and supporter of Kuch.

Despite success at school and work, early loss had punctuated Kuch's life: In October of 1988, militias raided his village, setting fire to his family's hut. His mother, carrying his baby brother in her arms, commanded him to run from the burning structure, but fear paralyzed him.

In the ensuing madness, he lost track of his mother, father and siblings and wandered for days that turned into years with others seeking refuge in camps in Ethiopia and Kenya. Later he reconnected with three siblings and a cousin in the refugee camps, but it was years before he would learn the fate of his mother and father. Hope for reconnecting with his mother was the force that propelled him forward.

But even in the relative safety of the U.S., Kuch encountered destructive treachery.

While a junior at CHC, a fellow student with whom he had become friendly accused him of sexually assaulting her. The charges derailed his studies for a year and brought with it the threat of deportation. But during his decade in the Chestnut Hill area, Kuch had developed powerful ties with members of the community who rallied behind him during the criminal trial. He was acquitted and returned to school, where he was selected to give the commencement address of his graduating class. His accuser was expelled from school. “The whole school was behind me,'' recalled Kuch proudly.

Today, married with a three-year-old daughter and approaching his 36th birthday next month (he only found out his actual birth date three months ago), time's passing has healed much of Kuch's emotional suffering. He is a bit impatient when talking of his childhood loss and his early years in the U.S., as recounted in the book penned by Millan, a graduate of the Iowa Writers Workshop who directs Drexel University's certificate program in writing and publishing.

The author and subject met when Millan was asked to select 10 undergraduate students to interview 10 Sudanese immigrants for the now-defunct Philadelphia City Paper as part of the Free Library's “One Book, One Philadelphia'' book club program. The two became close friends. Though the book is largely biographical, Millan took literary license. “I called it a novel because I had to create a compelling arc and characterization and also because Mike's family is very private, so I fictionalized their names,'' Millan wrote in an email. 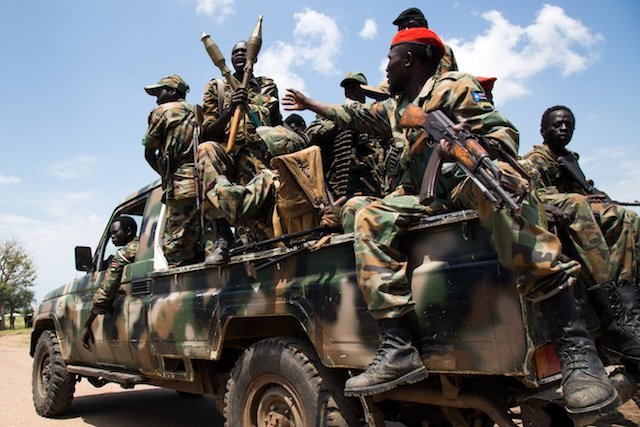 The Sudanese Civil War, which lasted from 1983 to 2005, one of the longest in world history, left over two million dead and injured, fractured families and "lost boys" like Majok.

Since its publication, “How Fast Can You Run'' has won a 2017 Independent Book Publishers Award Bronze Medal for War/Military Fiction and a 2017 Living Now Award Silver Medal for Inspirational Fiction. More recent chapters in Kuch's life include his return home to South Sudan in 2010, where “for the first time I felt that am no longer a refugee.''

He also accepted a position as an advisor in the research and policy office of the nascent country's President. In May of 2017, after seven years away, Kuch returned to Philadelphia to apply to several doctoral programs and is awaiting a decision. Though he hates the city's climate, there is one thing about it he has fully embraced: the Philadelphia Eagles.

Today, Kuch would much rather talk about his future than his past. “My message is, 'Look, I have a story to tell. I was a refugee and look where I am now.'''

He is grateful to neighboring African countries for allowing refugees to immigrate. He is particularly mindful that there are millions of children today enduring the same losses he did as a child. And increasingly, he is becoming immersed in the politics of South Sudan, which successfully gained its independence from Sudan in 2011. Yet the nascent government remains fragile, with civil war engulfing the country once again in 2015 and continuing to cause bloodshed to this day.

“I want people now to call me a found man,'' Kuch said. “I want people to know that I really do my best to be able to contribute to the betterment of society irrespective of the politics of now. I want to be a part of the better South Sudan that I see in the future.”

“How Fast Can You Run” is available through www.amazon.com, www.barnesandnoble.com or www.harrietlevinmillan.com