Stacia Friedman, who says this article “is fattening,” is seen here at the Henri Bourgeois Winery in France. (Photo by Jane Hulting)[/caption] by Stacia Friedman Taking a cruise on a luxury … 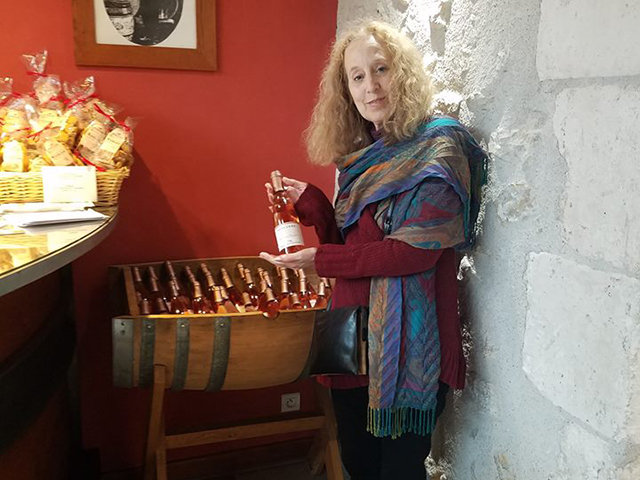 Stacia Friedman, who says this article “is fattening,” is seen here at the Henri Bourgeois Winery in France. (Photo by Jane Hulting)[/caption]

Taking a cruise on a luxury French canal barge had been on my bucket list for almost 10 years. After a significant birthday, I thought “What am I waiting for?”

The options I found online confused me. Did I want to cruise the canals of Burgundy, Provence or Alsace-Lorraine? So many barges, so little time. How to choose? A friend referred me to Barge Lady Cruises, an American travel company specializing exclusively in European barge cruises since 1985.

A family business run by Ellen Sack and her daughters, Barge Lady books charters for 47 barges in France alone, in addition to cruises in England, Ireland, Scotland, Holland and Germany. As soon as I spoke with Sack, I knew I was in good hands.

Step-by-step, Sack guided me through her website, helping me identify the perfect canal barge experience. “We visit every barge we represent,” said Sack. “That includes checking out the food, the wine, cabins and staff.” I made it clear that high quality French cuisine was a priority, in addition to spending time in Paris.

Like a skilled matchmaker, Sack rattled off a list of questions and then paired us with C’est La Vie, a 126-foot barge captained by Oliver Magret and his wife, tour guide Deb Magret. Our route? The Upper Loire, a region I didn’t know that was just a two-hour drive south of Paris. The time? The second week in October.

Unlike River Cruises advertised on PBS, which carry hundreds of passengers, canal barges accommodate just six to 10 pampered guests. For that reason, 90% of canal cruises are chartered by families or small groups of friends. In my case, we were four couples who met up in Paris and were chauffeured by Olivier to Sancerre, where our barge awaited us in the fading light of a lovely Fall day.

Six crew members were on deck to greet us with smiles and Champagne. I was impressed. Six crew catering to the whims of eight passengers! After plying us with bubbly, they served up tantalizing appetizers. Prunes marinated in Armagnac and wrapped with duck. Smoked salmon and crème fraiche on toast with dill. Melon gazpacho. Was it jet lag or love? Either way, I was seduced.

I admit I was nervous about the cabins, all of which were on the lower deck. I’m a bit claustrophobic and came prepared with Ambien. It wasn’t necessary. Our cabins were the largest I had ever seen or imagined. I had thought the images on Barge Lady’s website had been PhotoShopped.

But they really are as spacious and stunning as pictured. Fresh flowers, pristine bedlinens, six charmingly curtained portholes. But it was the bathroom that made me gasp. It was ripped straight out of Architectural Digest. Circular glass shower, heated towel rack, wooden cabinetry and L’Occitane toiletries. On a barge?

Dinner that night, and for all of the nights that followed, was a revelation. First, our chef, Maxime, stood at the head of the candlelit table and described the menu. Aubergine caviar, Charolais beef with olive mashed potato and steamed broccoli, followed by a cheese plate and — wait for it — poached pear in dark chocolate sauce with homemade vanilla ice cream.

Before we could catch our breath, another crew member introduced the evening’s wines, a white 2013 Mersault-Charmes and a red 2011 Volnay Clos des Chenes, both from the captain’s personal wine cellar of over 3,000 bottles. Ah. So this is how it feels to be Hollywood or French royalty!

Waiting for the first course, I couldn’t stop myself from slathering farm fresh butter on crispy baguettes. By the end of the week, I had sampled 24 wines and as many cheeses. The hell with my cholesterol. Damn the torpedoes! Full speed ahead!

I fell into bed convinced I would never eat again. That thought vanished the next morning at the sight of the breakfast buffet featuring baskets of flaky croissants, pastries, yogurt and fresh fruit. If I wanted an omelet, the chef would whip one up. I passed.

As the barge began to move, I was astounded by the quietness of the engine. More of a soft purr than a growl. The only other sound was the gentle lap of water along the edges of the narrow canal and the occasional squawk of ducks.

This is the true luxury of a canal barge, the slowing down of life to five miles per hour. Nothing but blue sky, puffy white clouds, cattle and horses grazing in meadows. The WiFi is intermittent, meaning that you are momentarily cut off from the daily media blitz, stock market reports and NFL scores. For some, this is a nuisance. For me, it was bliss. (Did I mention there was an open bar with top shelf brands open 24/7?)

Between each of the dozens of canal locks, we could walk or bike the tow path to burn off those calories, or laze on deck with a good book. Each day, we had a guided tour to local sites of interest, including the 12th century Chateau de la Bussier, the 1,000-year-old Chateau St Fargeau, the Gien tableware factory and a confectionary shop that claimed to have invented the bon bon. My favorite site? The famous aqueduct designed by Gustave Eiffel, the Pont Canal, which rises 30 feet over the Loire River.

After six hauntingly exquisite days, our voyage ended in Montargis, a lovely town containing 130 flower-bedecked canal bridges. Ultimately, barge cruises are a contemplative luxury, an opportunity to slow down, indulge the senses and discover the joys of life at 5 mph. The price per person is $4,000-$6,000 (not including airfare). Yes, it's extravagant but equal to staying at a 5-star hotel with private tours and dining at Michelin-rated restaurants with unlimited wine and top shelf alcohol for the same period of time.

For more information, visit www.BargeLadyCruises.com. Stacia Friedman is a Mt. Airy author and freelance writer who contributes to the Local and other publications and websites.