It was the height of the pandemic and Monika Schermer was panicked. Her husband, like so many in corporate America at the time, had been furloughed from work indefinitely. 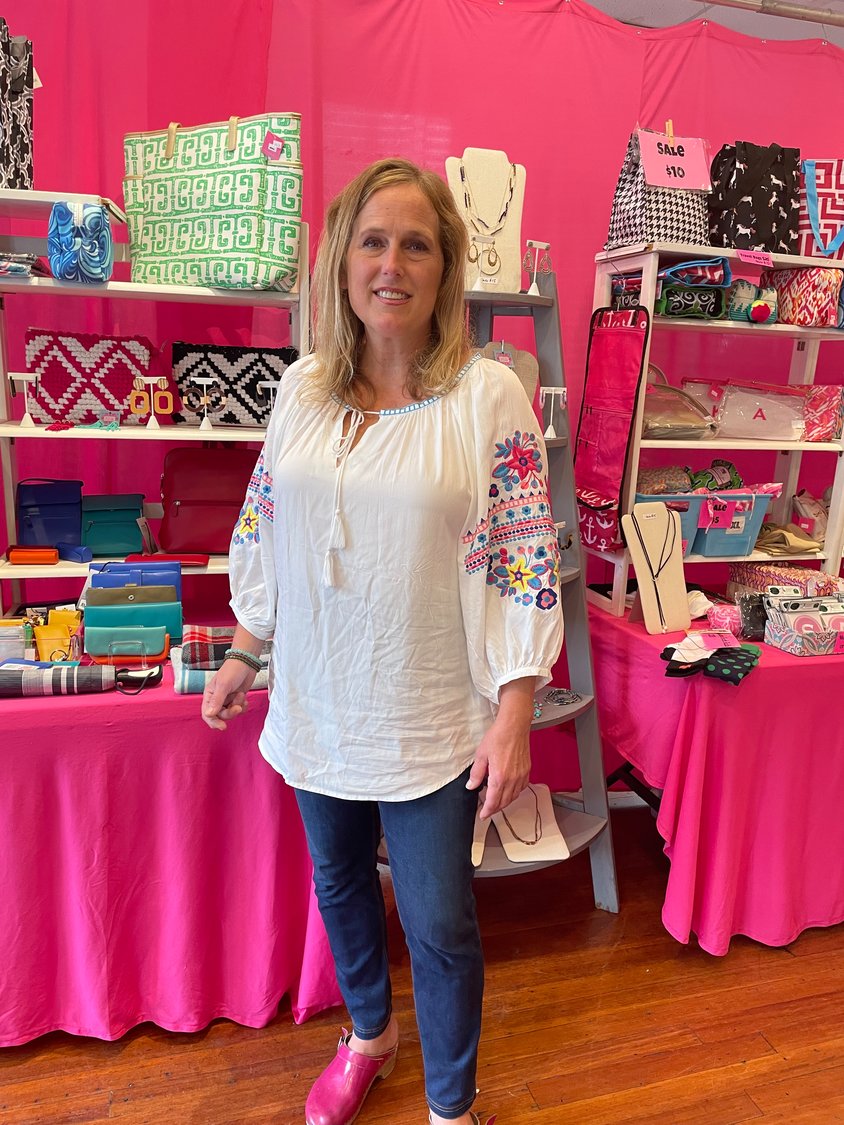 Monika Schermer is a fixture in Chestnut Hill, running her Bohemian Pink boutique. This month, as awareness is being raised about breast cancer, Schermer decided to tell her story, a cautionary tale for women who have put off annual mammograms or don’t think they need one.
Posted Thursday, October 21, 2021 6:00 am
by April Lisante

It was the height of the pandemic and Monika Schermer was panicked.

Her husband, like so many in corporate America at the time, had been furloughed from work indefinitely. Three months turned into six months, followed by unemployment, when Schermer suddenly had an awful thought.

“I said oh no, in two more weeks, we may not have health insurance,” Schermer said.

Schermer is a fixture in Chestnut Hill, having run her fun, fashion-forward Bohemian Pink boutique at the Top of the Hill near McNally’s Tavern for four years. This month, as awareness is being raised about breast cancer, Schermer decided to tell her story, a cautionary tale for women who have put off annual mammograms or don’t think they need one. The message here is that early diagnosis is the key. She also offers hope to women who may be avoiding the life-saving screening because it may incur a medical bill. There are plans available to those in need.

Her ordeal began on an October day in 2020, as she was hurrying to make necessary doctor appointments for check-ups before the insurance lapsed. Schermer, of Wyndmoor, realized she was overdue by about two years for her annual mammogram.

“So that day I called and made my mammogram appointment,” she said. “It’s always on your mind but you’ve got to go.”

She went to her appointment at the Chestnut Hill Women’s Center, and even after she was called the following day to come back in for another scan, she wasn’t worried.

“I thought it was just the typical dense calcification,” said Schermer, 50. “I wasn’t panicked at that point. I was contemplating not going. I was worried about the out-of-pocket bill.”

But she went for that second mammogram and the follow-up ultrasound, and that’s when her doctor was brutally honest.

“She said, ‘Based on what I’m seeing, there is an 80 percent chance this is cancer, but it’s early and it’s treatable,’” Schermer said.

The diagnosis was confirmed the following day after a biopsy, and surgery was scheduled for Thanksgiving week. She received her diagnosis on the day of a special virtual fashion show she was to take part in with other Chestnut Hill shops.

“I wore my signature pink dress, but I didn’t bring up my diagnosis,” Schermer recalled. “I reminded people it was Breast Cancer Awareness Month and to schedule their annual mammogram.”

She had the surgery the Monday before Thanksgiving, and it was only then that she learned there was more bad news to come. Even though the cancer was stage 1-A, it had invaded her lymph nodes, so instead of radiation, she needed to do four rounds of chemotherapy first.

“That’s when I lost it and broke down,” she said. “I realized I was going to lose my hair.”

She remained private about her ordeal until the end of December, when she began to let customers know what she was going through. By the time her chemo started in January, she’d made the decision to close the brick-and-mortar location of the shop.

“I decided to close so I could focus on myself and treatment,” she said. “When I closed, my plans were indefinite. I said I’m just going to take it day by day.”

Before she started chemo, she talked with a doctor who suggested she try cold caps to prevent hair loss. The cold caps will not work with every type of cancer or chemotherapy dosage, but Schermer tried it.

The routine involved placing hair caps in dry ice, then applying them successively during chemotherapy treatments to keep the hair follicles frozen and prevent the chemo from affecting them.

Her mother was by her side the whole time. And the cold caps worked.

“I got a cooler with 80 pounds of dry ice and eight caps and rolled my cooler into the chemo place in the Northeast every three weeks,” she said. “I dressed like I was going skiing and had my McNally’s blanket with me. I don’t think I lost any hair.”

Following chemo, she began radiation in Chestnut Hill at Penn Radiation. Often, she rode her bike or walked to treatment, her way of saying cancer wasn’t going to beat her.

She celebrated her 50th birthday while finishing radiation in the spring and has even reopened a pop-up version of Bohemian Pink at 8440 Germantown Ave. in the old Artisans on the Avenue space. She is a survivor, and implores women to follow her lead.

“Go get a mammogram. Period. If you can’t afford it there are ways you can get it paid for,” she said. “With an early diagnosis, the outcome is vastly better than it was years ago.”