Care and repair at the Jenks Playground

The smell of mulch is in the air and sprung has spring in Chestnut Hill! On Saturday, April 10, the community came together to help with the Jenks Playground cleanup, which was part of the city-wide Philly Spring Cleanup day.

Care and repair at the Jenks Playground 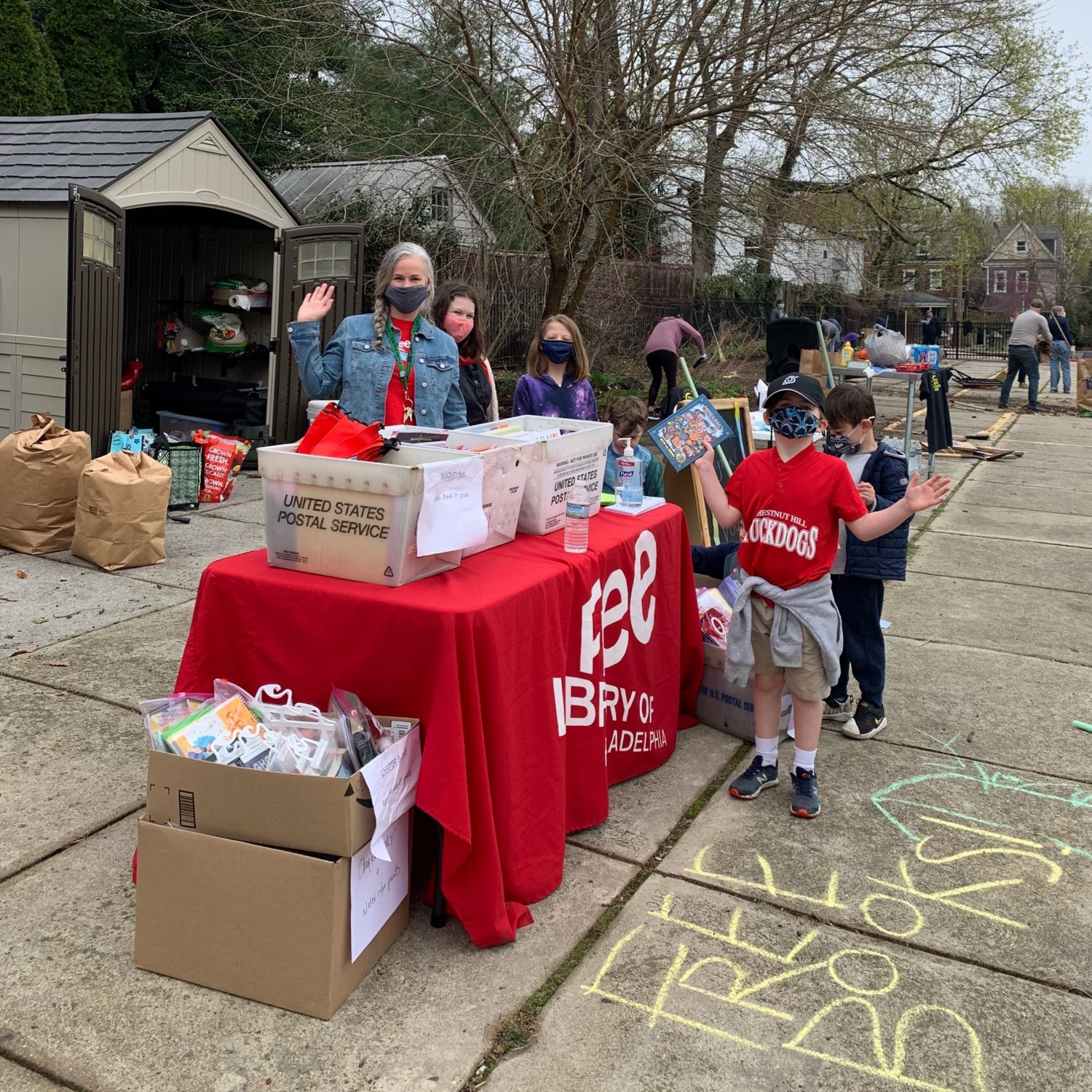 Prather Egan O’Donnell, Librarian at the Chestnut Hill Library, with a group of neighborhood children at the Philly Spring Cleanup Day.
Posted Wednesday, April 21, 2021 11:34 am
by Emily Plowman, Friends of Jenks

The smell of mulch is in the air and spring has sprung in Chestnut Hill! On Saturday, April 10, the community came together to help with the Jenks Playground cleanup, which was part of the city-wide Philly Spring Cleanup day. Organized by the Friends of Jenks, volunteers pulled weeds, swept leaves, collected litter, and filled more than 80 bags of garden trash.

Recognized by Keep America Beautiful as the largest one-day, citywide cleanup in the United States, the Philly Spring Cleanup project began in 2008 and has occurred every year (except 2020, which was cancelled due to COVID). Residents, businesses, and nonprofits all work together to beautify blocks and spruce up shared spaces, such as the play space and schoolyard at the Jenks Academy for the Arts and Sciences, which will celebrate its 100th anniversary next year.

Members of the community came out to assist with garden work, including Jenks parent Tamika Washington, who is running for Judge on the Court of Common Pleas, and her husband Charles. Charles Washington attended Jenks from K-8 and then went on to Central High School. Ms. Washington shared that, “Our oldest, Charles III, graduated in 2011 and was able to do the same!” Their younger son Joshua is currently in the 4th grade at Jenks and loves school. “We came out to the playground cleanup because we knew the kids had not been there in quite some time, with them being in school online. The playground needed extra love and care,” stated Ms. Washington.

Not only was the day filled with bags and brooms, but also BOOKS! Prather Egan O’Donnell, Librarian at the Chestnut Hill Library handed out free children’s books, compliments of the Friends of the Chestnut Hill Library. "With our community's public library being closed for over a year now, families have been unable to come inside and browse for books. With Jenks and many other public schools still without School Librarians, children need robust home libraries more so than ever.” Throughout the day it was nice to see the children helping out at the cleanup but also “getting excited about books again,” said Ms. Prather (as the children call her). “They actually put their gardening gloves down to pick up a book, take a break from the clean-up effort to read with a friend!”

A banner now hangs alongside the playground on Germantown Avenue and reads “Jenks Playground Needs YOU!” The Friends of Jenks is currently working with the Friends of the Children’s Park to form a campaign committee and raise the necessary funds to rebuild the beloved play space. Almost 25 years old, the playground is nearing the end of its useful life and is now under the jurisdiction of the Philadelphia School District. Dan Baselice, Jenks parent and Chestnut Hill resident, helped at the cleanup and recently launched a GoFundMe campaign. Mr. Baselice shared, “The playground, as we know it, is in jeopardy. The School District could deem the playground unfit and condemn it. It could then be razed and replaced with a more generic model as funds allow.”

While the playground may seem structurally sound to most, its equipment is aging, breaks often, and requires significant costs to repair. Mr. Baselice said, “We are looking for dedicated community members with significant fundraising experience to join the capital campaign committee to help raise the necessary funds. This committee ultimately will dialogue with the School District of Philadelphia to contribute to the final design of the play area.”

Jenks Academy for the Arts and Sciences