Breakthrough student Christian Hatcher. by Sue Ann Rybak Breakthrough of Greater Philadelphia, founded in 1995, marked its 25th anniversary at its annual Breakfast of Champions on Oct. 17 at the … 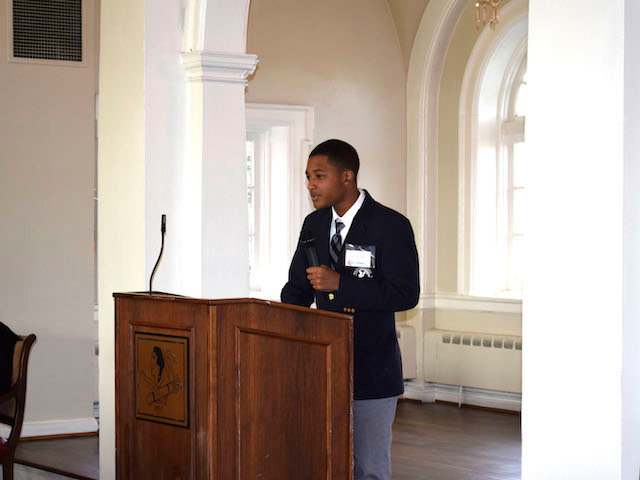 Breakthrough of Greater Philadelphia, founded in 1995, marked its 25th anniversary at its annual Breakfast of Champions on Oct. 17 at the Philadelphia Cricket Club, 415 W. Willow Grove Ave. in Chestnut Hill.

BGP, which originally began as the Summerbridge program, is a 10-year academic enrichment program for low-income Philadelphia students whose mission is to build “a path from middle school to college graduation for underserved students.” The program provides a six-week summer enrichment program for students entering seventh to ninth grade, bi-weekly Saturday programs during the school year and one-on-one support services for families. It is modeled after Louis Loufburrow’s Summerbridge program, which was founded in 1978 in San Francisco and is now called Breakthrough Collaborative.

Jason Duckworth, board chair of BGP , welcomed attendees and thanked them for helping the nonprofit organization celebrate its anniversary. Dr. Robbin Smart, executive director of BGP , said the program makes a difference by providing young people with real-life opportunities and empowering them to become leaders in their community by partnering with local businesses and corporations.

Christian Hatcher, an eighth-grade Breakthrough student, talked about attending the six-week summer program before he began seventh grade. Christian said by the time he started seventh grade, he was already familiar with many of the topics he learned in school that year.

“For example, when we got to ratios, I remember thinking we learned about them this summer in Breakthrough,” he told attendees. “By the time the concepts were introduced in school, I was already confident that I could do them. I would say that things were looking up.”

Christian said one of his favorite things about the program was the opportunity to explore something new. He recalled how he took a class in yoga and discovered that he was “not very flexible.” He said coming to school on Saturdays has helped him to “grow as an individual.”

Sam Rhoads, executive vice president of Philadelphia Industrial Development Corporation and clerk of the school committee at Germantown Friends School, said that as he reflected on GFS and Breakthrough, it occurred to him that they “are very much made from and molded from the same cloth, all be it 150 years apart.” (GFS will soon be approaching its 175th anniversary.)

“I really don’t think you have to be a Quaker to believe that there is God in everyone, and I would even say you wouldn’t have to believe in God to believe the only sin is to not support and awaken in every child their inner potential,” he said. “And that is what I believe GFS and Breakthrough share.”

Rhoads thanked the board, the conviction of the community, the contributions from families in our city and the parents of the children, who were now in their midst. He said Breakthrough is “bringing a quality education to today’s youth and spurring a lifelong love of learning.”

According to BGP’s annual report, while 74% of Philadelphia high school graduates do not enroll in college, 85% of Breakthrough scholars will.

The program helps to address learning loss by enabling students to learn year-round, serve as an educational resource for parents, schools and city officials and develops young adults by increasing their self-confidence, empathy, leadership skills and the ability to work in teams.

Breakthrough board member Darren Spielman, who is also a GFS alum, said a few words in honor of the late Dick Wade and his wife Cheryl Wade. He said that without them, thousands of young people would not have had “the energizing and transformational experiences” that they had through the program.

“Anyone who knows Dick and Cheryl knows that when they committed to something, they brought all of their substantial competence, passion, grace and heart to really embrace exceptional leaders engaged in service,” he said.

Jamal Hill, a former Breakthrough student, a teaching fellow in Atlanta [Hill’s hometown] and a board member of BGP , shared his story and told the audience he felt like he has “literally grown with the organization.”

“Where would I be if not for those generous souls, people like Cheryl and Dick Wade, who cared enough about me to invest their resources to help unmask the potential within me that too many others so often ignored?” he said. “And that’s why I choose to literally pay it forward. I choose to pay it forward so that others can experience the magic and the power of Breakthrough. I pay it forward to help raise up our future educators, lawyers, CEOs, scientists, engineers, nurses and doctors. I choose to pay it forward for that kid who said he never met any lawyers, but he wants to be just like me.”

He concluded the presentation by asking attendees to make a donation so that next year, new Breakthrough families will be “embraced by a community of advocates and given the wings that will allow them to fly.” He asked people to think about teaching fellow’s life before and after they enrolled in the program.

“With your help, our teaching fellows will have built a relationship and used their talents and their hearts to tangibly impact the lives of their students,” Hill said.