Last Monday's victory raised the Blue Devils' record to 3-5 overall. The victories recorded by the locals have all come against non-league opponents; SCH has not fared as well within the Inter-Ac. 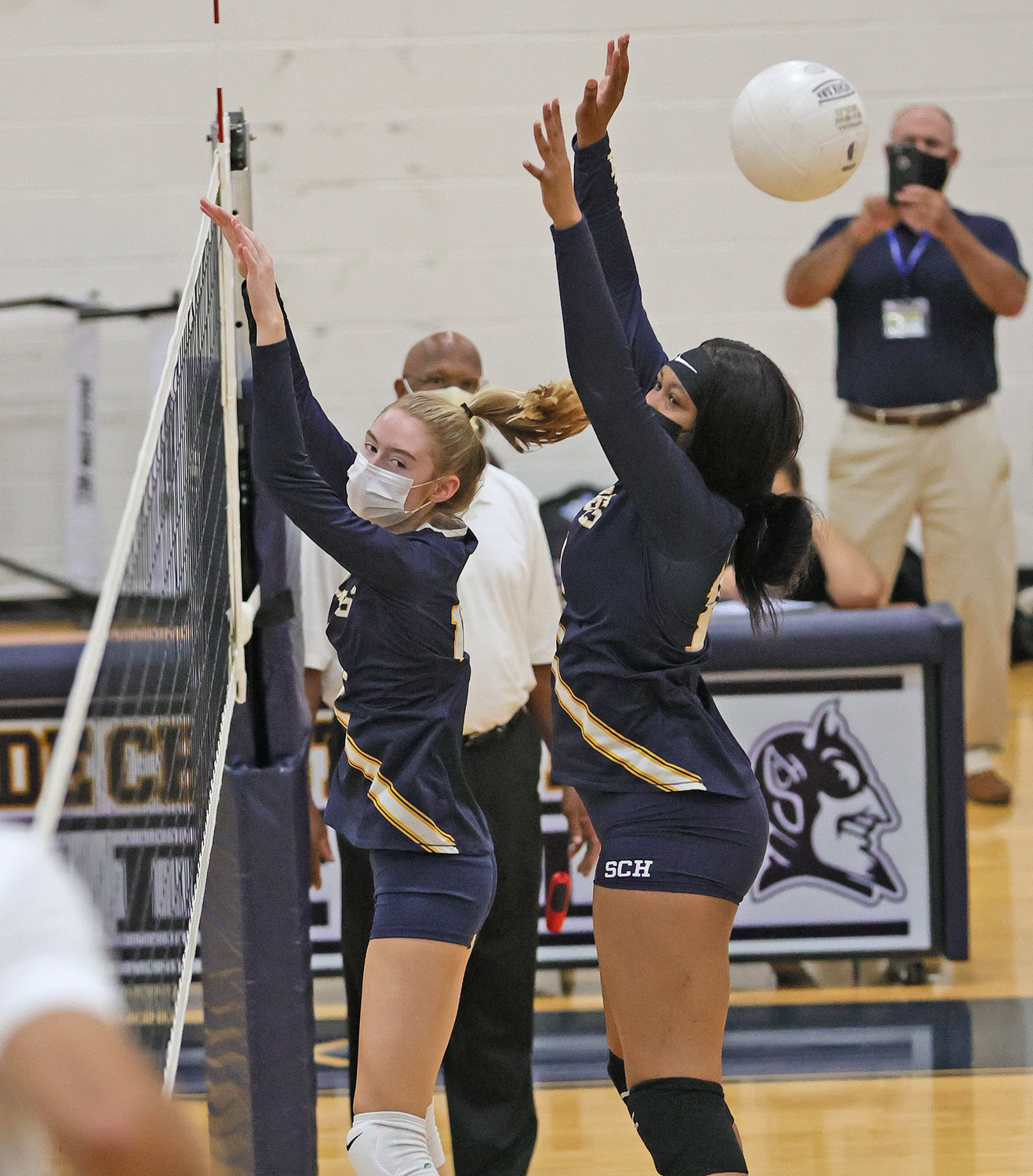 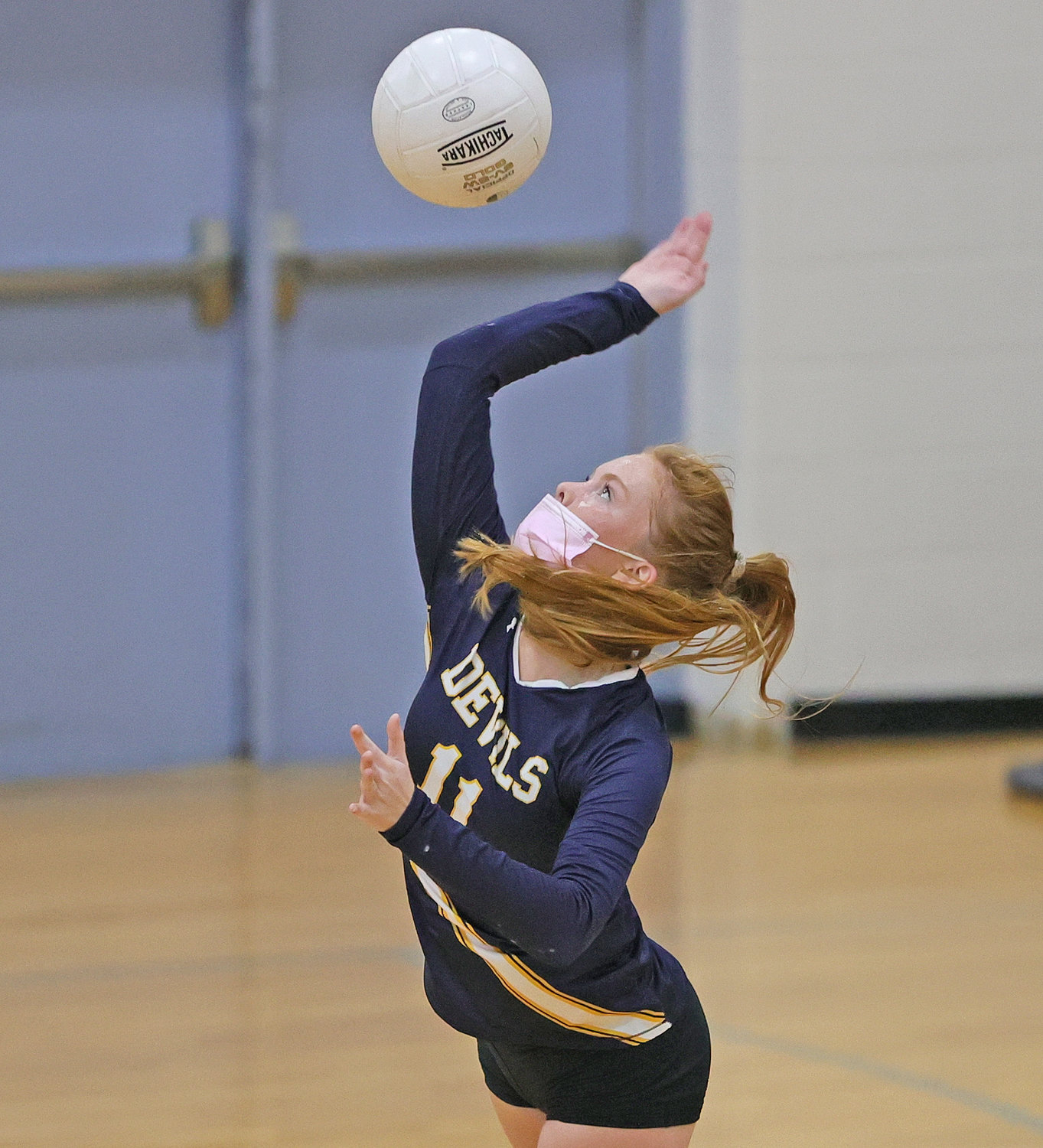 Blue Devils junior Jamie Ehnow is about to make contact with the ball on a serve.
Tom Utescher
Previous Next
Posted Tuesday, October 12, 2021 8:00 am
by Tom Utescher

In their first home match of October, the volleyballers of Springside Chestnut Hill Academy turned back the visiting Gators of Shipley School, winning in straight sets. Last Monday's victory raised the Blue Devils' record to 3-5 overall. The victories recorded by the locals have all come against non-league opponents; SCH has not fared as well within the Inter-Ac.

In the opening set last Monday, October 4,  the Devils slipped behind early, 2-1, but then went on an 8-2 run, getting strong play at the net from senior Jazze Wingard and benefitting from some Shipley mistakes. This gave the hosts a 9-4 lead, but over the next few minutes the visiting Gators narrowed the gap, reducing it to three points at 14-11.

Sophomore Zahkiyyah Frazier scored on a tip for an SCH side-out, and then junior Jamie Ehnow presided at the service line for another eight Springside points in succession. Four of her serves were not returned by the Gators, and she and Frazier each recorded a kill during this surge.

They appeared to be on the way to convincing victories in each of the next two sets, as well, but each time they lapsed and let Shipley get back in contention.

Thanks to a kill by Ehnow and a pair of Shipley errors, SCH got out to a 3-0 lead in the second game, but then the Devils sent their next serve into the net to give the Gators a side-out. Later, SCH climbed up out of a 16-16 tie with four straight points, and it looked like the home team might be on the verge of making a significant move in the set.

Shipley called time-out with the score 20-16, then came up with a block to end Springside's modest streak. The visitors won a few more points and then pulled even, 20-20, by tipping the ball over the Blue Devils' front row. Another tip by Shipley went out over the left sideline to bring the home team back to the service line with a 21-20 edge.

The Gators failed to return one of the Blue Devils' serves and also hit the ball into the net twice, bringing up set point at 24-20. On the next exchange, Shipley lost track of the flight of the ball and it hit the floor in the middle of the Gators' court, putting the hosts ahead 2-0 in the match.

As the third round got underway, SCH stepped out in front yet again, with one of the points in its 6-1 opening charge coming on a service ace by Ehnow to the left rear of the visitors' court. The Blue Devils continued to control much of the play over the next few minutes, attaining a 14-6 advantage.

After that, though, a combination of Shipley kills and blocks along with errors by SCH eventually brought about a tie score at 18-18 and then at 21-21. Springside senior Madi Callas recorded a kill for a side-out and then moved back to the service line.

The Gators could not handle her first serve, and the score was now 23-21.

Ehnow, who had rotated to left outside, delivered two successful hits in a row for an SCH victory in the set, 25-21, and in the match, 3-0.