Artistic trio originally from N.W. Philly ‘All in the Family’ in stunning new Woodmere exhibit

By Carolyn Huckabay Exploring one critically acclaimed artist’s extraordinary body of work and the familial inspiration that made it so, Woodmere Art Museum will soon be …

Artistic trio originally from N.W. Philly ‘All in the Family’ in stunning new Woodmere exhibit

Exploring one critically acclaimed artist’s extraordinary body of work and the familial inspiration that made it so, Woodmere Art Museum will soon be presenting “Generations: Louise Fishman, Gertrude Fisher-Fishman, and Razel Kapustin.” On view Oct. 13 to Jan. 6, “Generations” juxtaposes Fishman’s expressionist oeuvre with the work of her two powerful mentors: her mother, Gertrude Fisher-Fishman, and her aunt, Razel Kapustin. 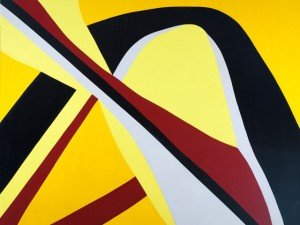 “Hard Edge Yellow” is by Murray Dessner, who died last month but whose work will be in the exhibit.[/caption]

Key pieces by the three artists with roots in West Oak Lane, each of whom is represented in Woodmere’s permanent collection, will be shown together, underscoring the pictorial, philosophical and emotive relationships among three distinct artistic voices.

Fishman, a noted feminist, is an internationally renowned abstract painter who was born and raised in Philadelphia and trained at Tyler School of Art. Now New York-based, Fishman’s recent marriage to graphic designer Ingrid Nyeboe was featured in the New York Times.

“My grade school years were spent in West Oak Lane till we moved to Havertown,” Fisher said last week. “I went to Rowen Elementary School and would have gone to Wagner Jr. High, but the family moved as I was going into my sixth year. I always regretted that. I graduated from Haverford High School in 1956, and in 1963 left for graduate school and relocated to New York City in 1965.”

Razel Kapustin and Gertrude Fisher-Fishman lived and worked in Philadelphia throughout their careers, with deep institutional relationships and participation in exhibitions across the city; Kapustin worked with the great Mexican muralist David Siqueros, bringing the political directness of Mexican modernism to Philadelphia.

Regarding her mother’s influence on her choice of career, Fishman told us, “It would have been impossible for me to ignore the strong smell of turpentine, the tubes of paint. her brushes, knives, canvases and painting panels. What interested me, though, was what I discovered in her art books and magazines, where I found work by the Abstract Expressionists.”

Fishman’s feminism and engagement with Jewish mysticism, as well as her abstract interpretations of the geometric grid and calligraphic gesture, will be highlighted in Woodmere’s exhibition. “Generations” will also demonstrate the context of her two powerful mentors — from the inspiration of Kapustin’s politically charged narrative scenes to Fisher-Fishman’s penetrating abstractions — whose work Fishman’s oeuvre directly and indirectly recalls. Selected juxtapositions of the works of the three artists will underscore a shared pioneering use of non-traditional materials, processes and subjects.

Why did Fisher leave Philly for New York? “When I was an art student in Philadelphia, I understood that New York City was where one went to practice one’s art. My aunt Razel even said to me that the mistake she had made was not going to New York, which she urged me to do. But these days, New York is no longer the center for artists.”

Also on display at Woodmere are the paintings of legendary Philadelphia artist and teacher Murray Dessner, who just died of cancer on Sept. 22 at the age of 77, which are recognized for their directness and beauty — ethereal and mesmerizing, rich in color, bold and dynamic. (Sadly, he was unable to view his work on Woodmere’s walls.)

“Murray Dessner: A Retrospective” will be the first exhibition to survey the major achievements of Dessner’s career. Born in 1934 in South Philadelphia, Dessner discovered his artistic calling when taking classes at the Samuel S. Fleisher Art Memorial; he attended the Certificate Program of the Pennsylvania Academy of the Fine Arts from 1962 to 1965. This year, just a few months before he died, Dessner retired from a celebrated 40-year tenure at the Academy.

The exhibition “Murray Dessner: A Retrospective” will include large-scale works of art that mark the significant phases of Dessner’s career. The exhibition will be accompanied by a catalogue that will include a broad-ranging interview about art and life with Dessner and a chronology of the artist’s career.

“Louise Fishman enjoys great distinction internationally as an abstract painter and voice for contemporary feminism … her mother, Gertrude Fisher-Fishman, and her aunt Razel Kapustin, were artists with solid careers in their lifetimes but whose achievements are little-known,” said William R. Valerio, the Patricia Van Burgh Allison Director and CEO of Woodmere and curator of the museum’s fall exhibitions.

These exhibitions are accompanied by a series of discussions, lectures and tours, as well as the student exhibitions “Creations from Young Artists: William Penn Charter Lower School” (through Oct. 21) and “Kids Care 19: Fairy Tales and Fables” (Nov. 4-Dec. 16) in the Helen Millard Children’s Gallery. In addition, the spring 2011 Woodmere exhibition “Violet Oakley and the Women Artists of Paris” is on view in Harrisburg in the Governor’s residence through Jan. 27, 2013.

Woodmere Art Museum is located at 9201 Germantown Ave. Admission to special exhibitions is $10 for adults, $7 for seniors, and free for students, children and museum members; exhibitions in the Founder’s Gallery and Helen Millard Children’s Gallery are free. For more information, visit woodmereartmuseum.org or call 215-247-0476.