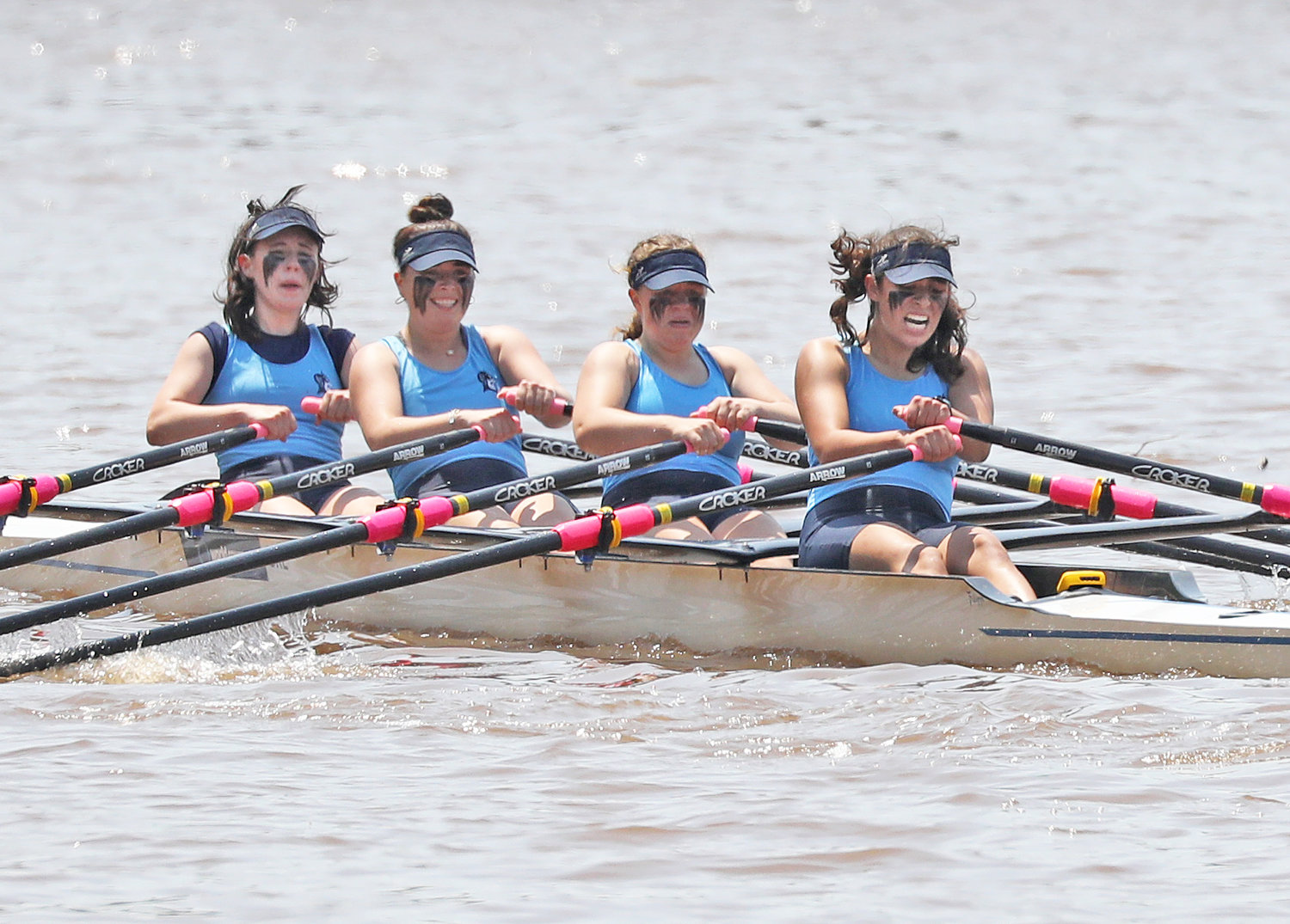 Boatmates in the junior quad in 2021 and in the senior quad this spring, these SCH girls are racing in their last Stotesbury together.  Photo by Tom Utescher 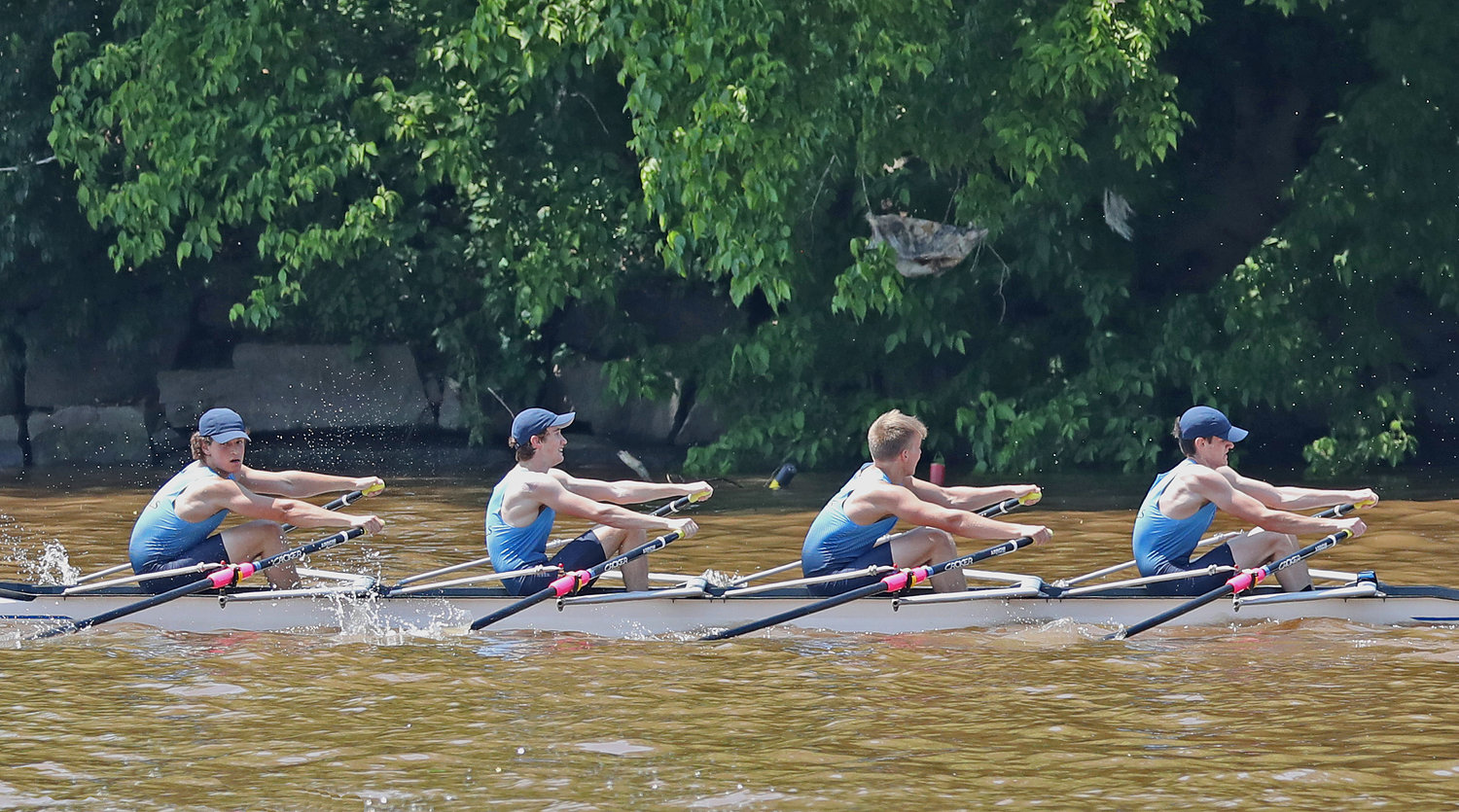 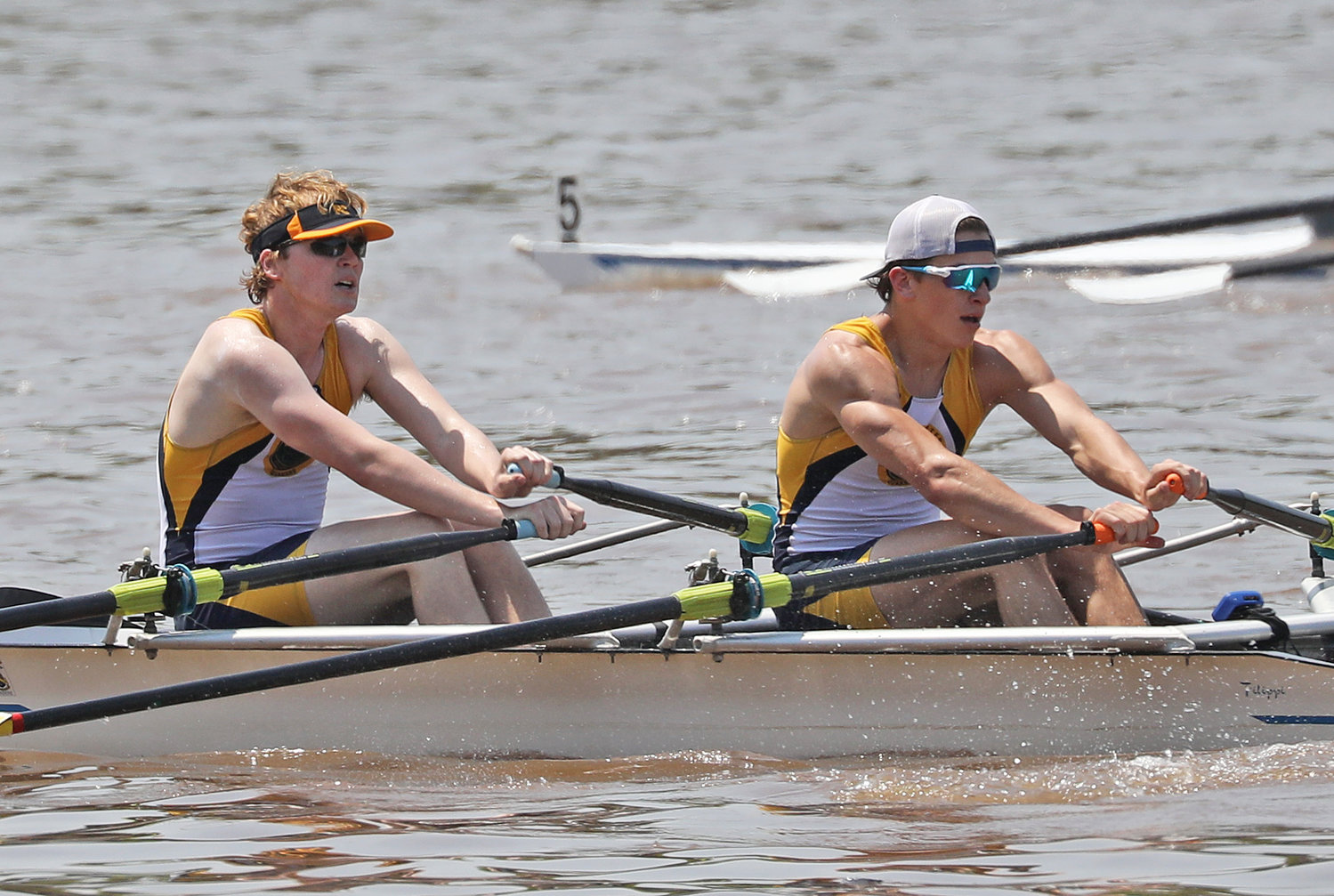 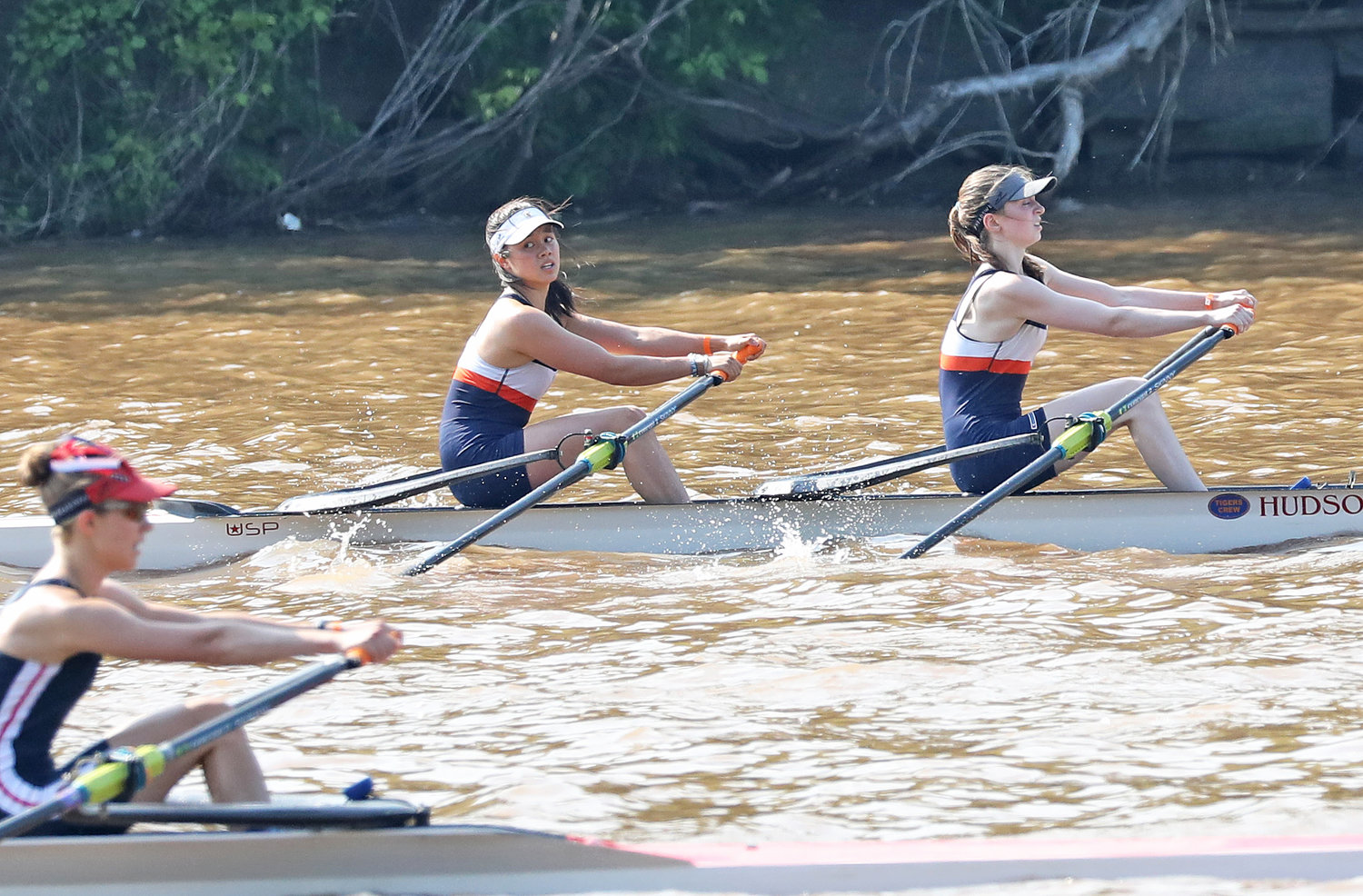 The gold and silver medals captured by area sculling programs were both earned by lightweight oarslingers from GFS. A pair of bronze medalists in quads competition represented Springside Chestnut Hill.

Both doubles, the two GFS boats each placed second in their categories in the time trials on Friday and then proceeded directly to Saturday's finals as weather disruptions caused the semifinals to be eliminated their events.

In the boys' lightweight double, junior Aidan Cusack (stroke) and senior Otis Harrison took the gold medal, winning the finals in five minutes, 25.93 seconds as they battled to the finish line just ahead of St. Francis High School of St. Catherine's, Ontario (5:26.14).

The girls' lightweight double was powered by sophomore Cara Appleberry (stroke) and senior Norah Lee, who secured the silver medal in 5:52.93,

behind a powerful tandem from Agnes Irwin (5:45.17) and a few ticks ahead of bronze medalist Albemarle High School of Virginia.

Racing in one of the "senior" categories, where a semifinal round remained between the time trials and the finals (it was eliminated in many events), was the SCH's boys' senior quad. Blue Devils Charles Miles, Jude Halfpenny, Jack Stephenson, and Andrew Topping went from a seventh-place result in the trials to a victory in the second of the two semifinal races. In the finals, familiar rival Haverford School took the gold medal, while the Blue Devils won the bronze close behind New Jersey's Haddon Township. Another Inter-Ac League foe, Malvern, was fourth.

Germantown Academy's lone finalist was its boys' freshman quad (Jack Wescott, Umang Mittal, Maloy Lafferty, Utsav Mittal). The Patriots earned the last berth in the finals coming out of the time trials, then moved up a spot in the finals to finish fifth. They were ahead of the other Inter-Ac boat in the race, Haverford.

Last weekend at Stotesbury, the weather gods continued to frown on rowers, as they had most of the season. Spells of rain on Friday made things uncomfortable for rowers and spectators, and some downpours later in the day had an effect on Saturday's racing. The water level on the Schuylkill rose, the current quickened, and many large logs and tree limbs (a watermelon and a basketball were also spotted) drifted down onto the race course. This made conditions for racing dangerous Saturday morning, as the temperature was starting its climb toward the 90's.

After the initial time trials that filled most of Friday's schedule, there were supposed to be semifinal races in eight categories late in the day. It was announced that these would be called off, and the six fastest boats in time trials in each of these eight events would advance directly into the finals on Saturday afternoon. This eliminated boats that had qualified in places seven through 12 in the time trials.

Racing was supposed to begin at 7:30 AM on Saturday. Early that morning, the P.A. system along the riverbank declared that racing would not start until noon. In was also announced that even the remaining semifinals would be scratched and all of the finals would feature the top six boats from time trials in each class.

Many rowers in the seven-through-12 spots learned they would not race, and made other plans. After another hour went by, it was learned that racing would begin at 1:00 PM, and that semifinals were being reinstated in the "senior" categories and for the boys' and girls' junior fours.

After this reversal, crews whose races were cancelled and later restored were able to be called back to compete in most cases, but not all.

Three other PC boats in "senior" class boats that had qualified on Friday were able to participate in semifinal contests early Saturday afternoon.

In the senior doubles, the boys (Jack Glomb, Scott Sweeney) ranked ninth in the trials and the girls (Claire Lewis, Isabella Salvi) were timed in 12th place.

Also 12th in the time trials was the boys' senior quad for the Quakers (Jakob Lanfranco, Harrison Signorello, Matt Clarke, William Kopf). All three of these Penn Charter boats came in sixth in the first of two semifinal races in their categories.

The girls in the senior quad from SCH (Gabriela Leon-Palfrey, Samantha Simon, Ashley Keough, Kaia McTigue) were in the ninth position in the time trials and then placed fourth in their semifinal race, about four seconds behind the last boat to make the finals. In the senior single, Blue Devils senior Samuel Halfpenny ranked 13th in time trials, and in this large event 18 rowers advanced into three six-boat semifinals. Halfpenny finished his run in sixth place in the first of the semi's.

A sixth-place semifinal result also ended the regatta for the boys' senior double from Germantown Friends. Tigers Turner Burns and Aden Solomon had been timed 10th in the trials on Friday.

For SCH girls, another stellar season ends with another PAIS title

In soccer playoffs, one of six area teams still standing