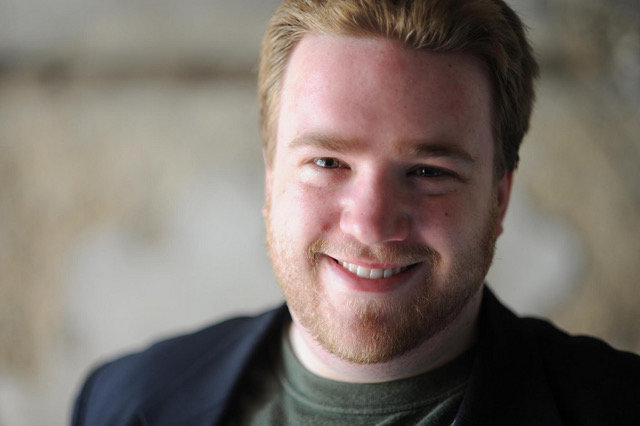 “I was looking for a city I could live in, work in and do theater in and not be poor all the time,” said director Ryan Walter (seen here) about Philadelphia.
Posted Wednesday, December 2, 2020 10:30 am
By Rita Charleston

Seemingly comfortably ensconced in his charming Connecticut home, Sidney Bruhl, a successful writer of Broadway thrillers, is struggling to overcome a “dry” spell which has resulted in a string of failures and shortage of funds. A possible break in his fortunes occurs when he receives a script from a student in a seminar he's been conducting at a nearby college — a thriller which Sidney recognizes immediately as a potential Broadway hit. Devising a plan with his wife to somehow make the play his own, the suspense mounts, and the plot thickens.

Penned by Ira Levin and described as a “murder within a play, within a murder, within a play,” “Deathtrap,” produced by Allens Lane Theater and directed by Ryan Walter, will stream online Dec. 4, 5 and 6.

Originally from upstate New York, Walter moved down to Philly in 2008 after receiving  his B.A. in Drama from Vassar College. “I was looking for a city I could live in, work in and do theater in and not be poor all the time,” Walter said.” I knew New York City was not a workable option for me, but Philadelphia kept coming up in various discussions with people I knew, so I decided to check it out. It just so happened that a friend of my mother's lived in the city, and she offered to put me up for a night. And it just happened to be Fringe Festival when I came in. And so I got a little taste of Philly theater and liked it, so I decided to move here.”

Holding down various jobs at first, Walter finally found  his way to doing child care, which he says has been his bread and butter. “Today, when I'm not involved with the theater, I am working as a schedule and activities facilitator for the Parent-Infant Center. We have turned our after-school into a place where children can engage with online learning while under  the  supervision of trusted adults.

“I like working with kids, but theater has been my passion since I was 5 years old. I was the only child in my generation in my family, so I had no younger cousins around my age. In fact, the closest cousin below me is 11 years younger, and the closest cousin above me is about 10 years older.”

And so Walter said he grew up enjoying all the attention that his relatives lavished on him. His first theatrical memory was playing a Lost Boy in a production of Peter Pan at age 5 at his school. “And for some reason, that was the starting point because it was from there that my family reached out to the director of that show, who ran a small children's theater. I did two shows a year with them from the time I was 5 until I was 18.”

But by the time he was 16, Walter had already decided to pursue theater as a career, and he applied to the alma maters of both his parents, finally deciding to attend Vassar, the school his mother had attended, saying that was probably the best decision he ever made.

Another great decision was moving from his first apartment in West Philly to his recently acquired apartment in East Germantown. “I moved out here at the beginning of June. I went looking around and fell in love with this cute little apartment in this cute little house. It's quiet here. There's not a lot of traffic on my street, so it's easy to walk around and enjoy the beauty and solitude. It's calmer and nice to be where the feeling is a little bit slower.”

Today, Walter, 35, explains that he's worked with Allens Lane Theater for years in a variety of capacities, even serving on its advisory board. Making his directorial debut with “Deathtrap” there, he insists that Vassar taught  him the arts of collaboration and analysis. “It was there that I learned how to take apart a script, understand it and craft something that is beautiful and meaningful. They taught me everything it takes to be a good director.”