This chart shoes the number of deer culled in the Wissahickon (blue) and in all city parks, including the Wissahickon (orange). Cull totals remained relatively flat between 2003 and 2011 before … 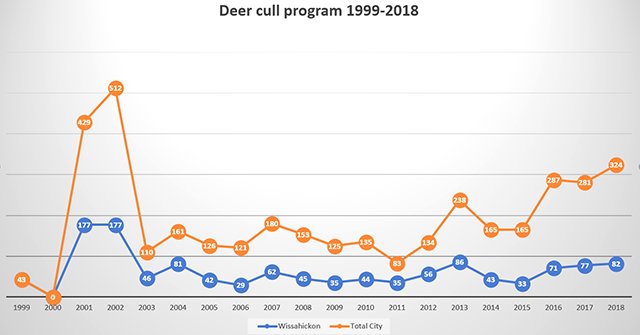 This chart shoes the number of deer culled in the Wissahickon (blue) and in all city parks, including the Wissahickon (orange). Cull totals remained relatively flat between 2003 and 2011 before rising in recent years.

In 1999, The Fairmount Park Commission decided to tackle the problem of a booming deer population by hiring a sharpshooter to come in and “cull” the city’s herds. That decision was controversial at the time, prompting protests and legal challenges that have since faded in their resolve.

A total of 324 deer were killed in this year’s Fairmount Park Deer Management Program, according to the report. Of the that number “63 from West/East Fairmount Park, 82 from the Wissahickon Valley, 32 from Cobbs Creek Park, 17 from Tacony Creek Park, 42 from FDR Park, and 88 from Pennypack Park,” said Barry Bessler, director of policy and compliance for Philadelphia Parks and Recreation.

As a result, more than 7,000 pounds of venison was donated to various food banks in the Philadelphia area.

Now after its 20th season, Parks and Recreation still believes the annual cull is an important part of routine maintenance of the city’s forested areas.

Bessler was the Fairmount Park Commission’s chief of staff when the practice of culling deer first began. He supported the decision then and still does today. The deer cull, he said, has helped to “reduce the negative impacts that the deer population was taking on wooded areas.”

Before the deer culling program was put in place, the white-tailed deer population put an enormous amount of strain on the forests, Bessler said. The deer were eating too much of the forest at one time, making it unable to replenish the materials as quickly as they were being taken away.

“The deer would eat everything from the ground up to where they couldn’t reach anymore,” he said.

This caused a browse line, the boundary between upper plant growth and lower plant growth that has been stripped and eaten by animals, all along the forest.

Once the deer cull began, however, “the forest has been able to naturally regenerate that damage significantly reduced,” Bessler said.

And not only has the deer cull improved the productivity and the health of the forests, there have been some secondary benefits as well, Bessler said. In the early years of the deer cull program, the number of deer vehicular collisions decreased by about 75 percent, he said. This has been especially beneficial for the roads near Wissahickon and Pennypack Park.

Since the cull was first implemented, sharpshooters have removed 3,793 deer from city parks, or approximately 190 deer a year. The trend, however, has not been uniform. Deer removal totals in both the Wissahickon and citywide had been trending down from a high of 512 deer killed in 2002 to a low of 83 in 2011.

Over the past eight years, however, the cull program has expanded, with deer taken in Cobbs Creek starting in 2010, Tacony Park in 2014 and FDR park in 2018. Those program expansions have helped fuel an upward trend in that time.

Over that time, Pennypack Park has seen the most deer removed – 1,819 in total. The cull has removed 1,264 deer from the Wissahickon.

These yearly efforts usually cost the USDA and the Parks and Recreation about $40,000 a year, an increased rate since the program’s start in 1999, Bessler said.

While the annual program has not been nearly as controversial in recent years, there is still organized opposition to the cull, particularly in Northwest Philadelphia. 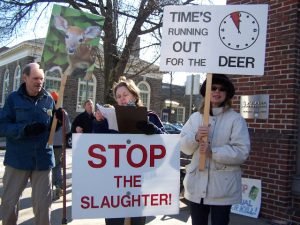 Chestnut Hill area residents (from left), Jay Roberts Mary Ann Baron and Christina Kobland at a protest of the ongoing deer cull in the Wissahickon two years ago.

Chestnut Hill resident Mary Ann Baron, a co-founder of PAD, Philadelphia Advocates for the Deer, has publicly opposed the deer culling initiative since the very beginning.

Baron, who lives near Wissahickon Park, said that deer would roam on her property quite frequently, eating acorns under her trees.

“The deer became part of my extended family,” she said. So, getting involved in deer advocacy just “felt like the right thing to do.”

Baron, along with fellow activist and Hill resident Bridget Irons, started PAD in 2010 after the disbandment of the Friends of Fairmount Park Animals, an animal activist group that the pair were previously involved in.

After years of lobbying public officials in hopes to engage a discourse on the deer culling initiative, Baron has turned to researching new remedies that could potentially eliminate deer culling altogether.

Baron cited an article posted in Weavers Way Co-Op’s newspaper, “The Shuttle,” by Lee Hall, president of the Concern for Animals/Respect for the Environment, a nonprofit based in Chester County. Hall argued that coyotes could – if their populations were allowed to flourish in city parks – keep deer populations lower thanks to natural predation.

It is, of course, a solution that might be met with skepticism by park users. Coyotes are generally not a threat to humans, but city residents might not be eager to invite coyotes into their parks.

Other solutions, including darting female deer with contraceptive treatments, have largely been ruled out in Pennsylvania, which has ruled that hunting and sharpshooters are the only legal way to thin deer populations. In fact, when sharpshooters were first introduced in Philadelphia, deer hunters were also opposed as they believed the program was a threat to game hunting.

The main issue for Baron and Irons is that the shooting of deer will never end in the park.

“With almost 4,000 deer culled, how do sharpshooters keep finding this many deer to kill?” Baron asked.

With state laws not likely to change, and predators not likely to be embraced in city parks, sharpshooters will likely be the answer for the foreseeable future.