When 21-year-old Dia Lee was struck and killed by a speeding Tesla in Germantown last week, many residents of Northwest Philadelphia were shocked, but not surprised. 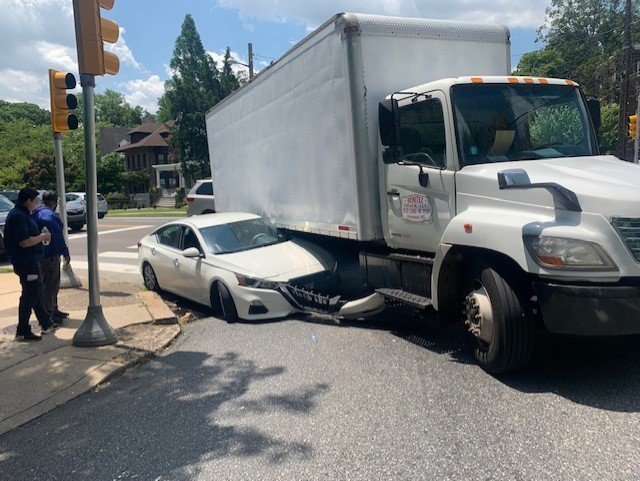 Crashes like this recent one at the corner of Lincoln Drive and Hortter Street have become all too common, say members of the Northwest Traffic Calming Committee.
Posted Wednesday, June 29, 2022 12:00 am
by Tom Beck

When 21-year-old Dia Lee was struck and killed by a speeding Tesla near Germantown Avenue and Coulter Street in Germantown last week, many residents of Northwest Philadelphia were shocked, but not surprised.

Several days later, on Friday, June 24, Quadera Parrish turned herself in for striking and killing Lee, who was on their (Lee used they/them pronouns) way to their job as a barista at Uncle Bobbie’s Coffee & Books at the corner of Germantown Avenue and Church Lane, with her car.

Mt. Airy resident Kittura Dior, one of the original founders of the Northwest Traffic Calming Committee, said this kind of reckless driving is on the rise - which is why she and her co-founders are bringing their dormant committee back to life.

“For somebody to be knocked in the air, that car had to be going really fast,” she said.

Dior and her group originally founded the organization back in 2007 when a Ford Explorer crashed through a house on Lincoln Drive.

“The shock of that is what got me activated,” Dior said in a phone interview with the Local.

Over the years of the group’s existence, the group eventually fizzled after achieving its main goal of making elected officials aware of how traffic-calming measures can reduce fatalities.

As of this year, however, the committee is back.

“With the pandemic we’ve noticed an uptick in completely lawless driving,” said Anne Dicker, a resident involved in the effort, which is now being spearheaded by East and West Mt. Airy Neighbors community groups. “People are driving erratically.”

According to a study by the US Government Accountability Office, traffic fatalities have increased over the course of the pandemic, which comes after a long period of decline.

Residents who are concerned about traffic say accidents in the Northwest are on the rise - especially on Lincoln Drive.

“Everybody has almost been hit by a car, or their kids have almost gotten hit by a car,” said Josephine Winter, executive director of West Mt. Airy Neighbors. “The road rage is everywhere.”

Paden Amsden, who bought a house on the west side of Lincoln Drive between Greene and Hortter Streets in February 2021, had a car crash into the concrete bollards in front of his house, which were installed by the previous owner. The car ended up in his neighbor’s yard.

“It was four days after we settled on the house,” Amsden said. “I think it was my first night sleeping there.”

Since then, two more accidents have resulted in property damage to his house. In one instance, his houseguest’s car, which was parked around the corner on Arbutus Street, was totaled.

“You can sit on my front porch and see people run the lights, cut people off,” he said. “While there've been three accidents on our specific property, we’ve witnessed probably five to 10 others from here.”

Amsden said he’d like to see speed cameras installed on Lincoln Drive, citing the success they’ve been in Northeast Philadelphia on Roosevelt Boulevard.

According to an article in the Philadelphia Inquirer, speeding violations on that thoroughfare decreased 91.4% from June 1, 2020 through November 2021, when cameras were activated. Average speeds measured at eight monitoring locations also declined, the article said.

Amsden has seen firsthand the success of speed cameras on Roosevelt Boulevard, which has a reputation for being one of the most treacherous roads in the country.

“I used to use Roosevelt Boulevard as a racetrack,” he said. “Until I got a ticket on it.”

Dior told the Local she also wants to see a standardization of yellow-light timing. Typically, yellow lights stay on for different durations of time depending on the intersection, which creates some confusion for drivers who don’t know how long they have until the light turns red. For this reason, she also supports countdown lights that tell drivers how many seconds are left before the light turns red.

Fixes like those could potentially result in fewer accidents like the one that injured 14-year-old Sadie Batchis in Germantown on June 9.

She was running in a crosswalk to catch a bus when a car sped up to race through the intersection at Chelten Avenue and Greene Street. Sadie ended up getting her foot crushed. The incident happened at about 3:30 p.m.

“The car was speeding through the yellow light to get past the intersection before it turned red,” said Sadie, a student at Central High School. She was coming home from Central at the time.

“I did knock the entire side mirror off the car,” she said. “I think I may have done that with my chest.”

Sadie also ended up with a bruise on her chest, but doesn’t recall exactly how that happened, she said, because it all happened so quickly.

“I may have hit my head on the ground or the car,” she said. “I didn’t get a concussion or anything though.”

Dior and Dicken both told the Local she’d also like to see the portion of Lincoln Drive that has houses fronting on it lose its designation as an arterial boulevard, which encourages traffic engineers to prioritize speed over safety.

“If you’re in a neighborhood with houses and pedestrians, they have to be taken into account when you are designing the road,” Dicken said. “We don’t have to have the fastest road in the world.”

Those interested in getting involved with the NWTCC can learn more at wman.net/traffic-calming, where residents can sign a petition for traffic calming on Lincoln Drive.

Editor’s note: The print version of this story used incorrect pronouns for Dia Lee. The Local regrets the error.