A flock of bird-watching books, including several accounts of ‘Big Year’ quests and ‘Confessions of a Lister.’

by Hugh Gilmore If you want to take up the hobby of bird watching, and begin this afternoon, you could easily notch 50 bird species for your “life list” before this year ended – without …

A flock of bird-watching books, including several accounts of ‘Big Year’ quests and ‘Confessions of a Lister.’ 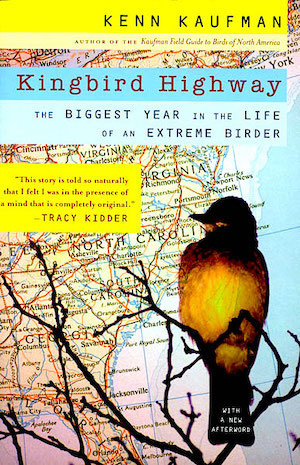 If you want to take up the hobby of bird watching, and begin this afternoon, you could easily notch 50 bird species for your “life list” before this year ended – without leaving Philadelphia. Add a few short trips, say to Fort Washington, or Cape May Point, and it should be easy to get to 100. It gets harder after that, but that’s when the true fun begins.

Not every “birder” is a “lister,” but most are. Some keep daily lists of species they’ve seen, others weekly, monthly, yearly, lifetime lists. Some try to photograph every bird they see. Others record their songs or calls. It’s one of the world’s biggest outdoor hobbies. Some regard it as a sport – Cape May, for example has an annual “World Series of Birding,” where teams compete to see who can see or hear (must be witnessed by a majority of

the team) the most species in 24 hours of non-stop racing around southern New Jersey. If this all seems too much, one can sit in his or her backyard and wait. In my small backyard in Chestnut Hill, I’ve seen 69 species of birds, including bald eagles, turkey vultures and great blue herons.

Some see the greatest possible accomplishment in birding as the “The Big Year” – when a person sets out to break the record for species seen in a year in a given geographic area. The American Birding Association record for the North American area stands at 836 species, set by a visiting Australian named John Weigel. The world record is 6,852 species seen in 2016 by Arjan Dwarshuis of the Netherlands.

As you might imagine, there is a considerable literature describing these, and other, feats of knowledge, determination, stamina and luck. The first classic book in this genre was written by the venerable Roger Tory Peterson who traveled North America for a year with an Englishman named James Fisher. In 1955, they produced a highly readable book and documentary film, both called “Wild America.” Peterson noted in a final footnote that he had seen 572 species during the trip.

In the years since, at least another 20 “Big Year” books have been published. They’re all exciting, even if you’re not a birder, because they involve adventure (sometimes to extremes) fanaticism, an incredible network of tipsters telling the quester where to go, modern logistics, and usually a fair amount of good-natured humor.

I can’t let this opportunity go by without mentioning my two favorites. First, Kenn Kaufman’s “Kingbird Highway: The Biggest Year in the Life of an Extreme Birder” (1997). Kaufman dropped out of high school, where he was student council president, at 16 and went on the road, driven by his love of nature. Hitchhiking, and with a variety of old cars, vans and pickup trucks, he crisscrossed the nation. In 1973, he tried the Big Year stunt, ticked off 666 birds and came to learn that counting birds for a list was not the same thing as studying and appreciating nature.

My final recommendation is “Adventures in Birding: Confessions of A Lister” by Jean Piatt (1973). I’m still charmed by this book for two reasons. First, Piatt and his wife were inveterate Philadelphia birders and this book entertainingly tells about their quest to join the 600 (life list) Club for North America above Mexico. This was back in the pre-computer days and one of the things Piatt did to get the latest information was to hang around the Tinicum Wildlife Preserve back when it was still run by the Philadelphia Department of Parks and Recreation. I too visited the station there as often as I could back then and probably met him without knowing who he was.

Only after I had finished my graduate coursework in physical anthropology did I realize that Jean Piatt had been my professor at the University of Pennsylvania medical school when I took the course in gross human anatomy. I later found his book in a second-hand bookshop and made the connection. Ever since, I have regretted that birds and birding never came up when I had the pleasure of his funny and precise company.

Our book reviewer, Hugh Gilmore, has been birding since the summer of 1964. He lives and writes, with binoculars always handy, in Chestnut Hill.

‘Queen's Gambit’ author was amazingly diverse, but known more for movies based on his work