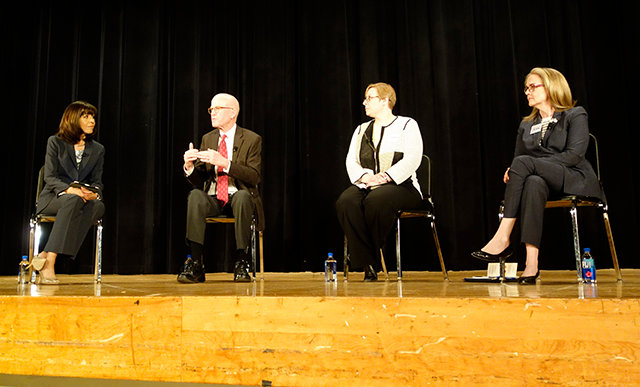 There was more agreement than debate on the host of issues: environmental, gun control, health care, the opioid epidemic, labor issues and redistricting. It was moderated by WHYY’s Tracey Matisak, who posed the initial round of questions and then opened it up to the audience.

The first question addressed the recent redistricting efforts that created the new 4th District in which the candidates are running.

Goodman, 47, a Yale Law School grad and a first-timer running for office after battling the NRA in Harrisburg as executive director of Cease Fire PA, said she was pleased with the remapping put in place by the Pennsylvania Supreme Court and said she thought balance might help break partisan gridlock.

“Part of the problem is that we are so divided we can’t get anything done in Harrisburg or the country,” Goodman said. “We all want a better future for our kids, and we want a safe America. For 15 years I have been working on both sides of the aisle for better gun laws.”

State Rep. Madeleine Dean, 58, a Glenside native who was both a lawyer and college professor before turning to politics, said she has practiced bipartisanship in the state house.

“In the state legislature I have worked on bipartisan bills and will give up being a prime sponsor of a bill if a Republican leads the way,” Dean said. “Having said that I believe we need more Democrats and more minorities and women in Congress.”

Hoeffel, 68, is a former U.S. Congressman from Montgomery County who left the seat for his ultimately unsuccessful challenge to then-U.S. Sen. Arlen Specter, a Republican, in 2004. He served as a state representative, county commissioner, and ran unsuccessfully in 2010's Democratic gubernatorial primary race.

The last woman in Congress from Pennsylvania was Hoeffel’s successor, Allyson Schwartz, who succeeded Hoeffel in 2005.

“There is no question that Congress is broken with hyper-partisanship, and both parties are responsible,” Hoeffel said. “I understand government and politics. I understand why things don’t get done, and I will stand up to Trump for sure while working with my colleagues.

In terms of the environment, all three expressed their concerns and called on President Trump to acknowledge and accept the scientific facts regarding climate change. The trio also agreed for the need for proper funding for the EPA, the need to hire the right people and allow them to do their jobs, and to continue investment in wind and solar power.

Dean, who several times raised her copy of the Pennsylvania Constitution, noted that Article 1, Section 27, states “the right to clean air, water and preservation of a clean environment.”

“We the legislators are trustees of our planet and not just for us but for future generations. This is not just an environmental issue, it is a moral issue,” said Dean to a round of applause.

Hoeffel said that the first thing he would do when it comes to the environment “is to get Trump out of office.”

The next question concerned gun control.

Dean said gun control is a central issue in our country, and she was glad it is remaining on the forefront.

“As an adult, I took my kids to the Million Mom March and started the Pennsylvania Safe Caucus to address gun control,” she said. “I was told freshman legislators don’t start caucuses, but I did that. Thoughts and prayers are not enough.”

Goodman said she came to the gun control issue “as a mom and an American.”

“I remember the Columbine shootings and I’m sorry to say 19 years later we are still grappling with this issue,” she said. “I am an expert on this and have a track record on this. That is why I want to go to Washington because there is so much more we can do and need to do on the federal level.”

Hoeffel said he was for legislation allowing police to seize guns on a temporary basis.

“As a freshman legislator on June 17, 1999, I voted for background checks, and we need to extend those checks and allow police to seize guns on a temporary basis if there is mental illness or a threat of violence,” Hoeffel said.

When the conversation turned to opioid abuse, all agreed that the issue was an epidemic and a public health issue that needs more funding and education.

“We need funds for treatment, prevention and the will to regulate big pharma companies and not to treat people with addictions as criminals,” Goodman said.

Dean echoed those comments and shared some statistics.

“The gravity of the problem is incredible, she said. “In 2016, 66,000 Americans died of drug overdoses. That’s 175 people a day and 13 to 15 of them occur in Pennsylvania every day. Shortly after President Trump declared this a public health emergency, he did not put one dollar toward it. Addiction is a disease that we need to shine a light on and we have to be mindful we failed in the past with the crack epidemic.”

Hoeffel agreed with the others, noting that doctors need to be better educated.

“They need to be willing to say ‘no’ to their patients and not over prescribe,” he said. “What we don’t need is more law enforcement and mandatory sentencing for nonviolent drug offenses.”

Dean noted that the number one or two questions she hears from constituents and on the campaign trail is health care.

“Access to good, affordable health care should not be denied based on economic status or philosophy, “she said. “Medicare for all is one option. People ask, ‘How are you going to pay for it?’ and I say, ‘How can we not pay for it?’ We pay more for health care as a percentage of GDP than any other country on the planet.”

About a dozen audience members then got to pose their questions and voice their concerns.

One questioner asked why she should vote for Hoeffel over the women candidates, noting that currently there are no women in the 18-seat U.S. House of Representatives delegation representing the state.

“If you want to vote for a woman, I understand that desire and it doesn’t upset me,” he said. “People have every right to run, but what I don’t like is this notion of ‘identity politics.’ I don’t feel I am a dinosaur and disagree that I haven’t had an original idea in 20 years. That thinking is a form of ageism.”

Dean said she believed that the state needs better representation with women and minorities in government.

“I have never run for office and said ‘vote for me as a woman,’” she said. “I have experience in the Pennsylvania House where only 20 percent of our house members are women. It’s a problem and it’s not equitable. We are in this pickle because we have too many of the same type of person representing a diverse population.”

“Sometimes you need someone who hasn’t been in elected office who knows the issues and can act as a safety net for all,” said Goodman, responding to the question.

Asked if they would support Nancy Pelosi as the Democratic Speaker of the House, Hoeffel and Goodman said they would, Dean was on the fence.

“I will tell you that I have voted for and run for good leadership, and we need changes,” Dean said. “If we want to put women at the table of leadership, Nancy is a force. She is very bright and very good, and I would certainly consider her.”

Exercise can turn back the clock on feeling your age