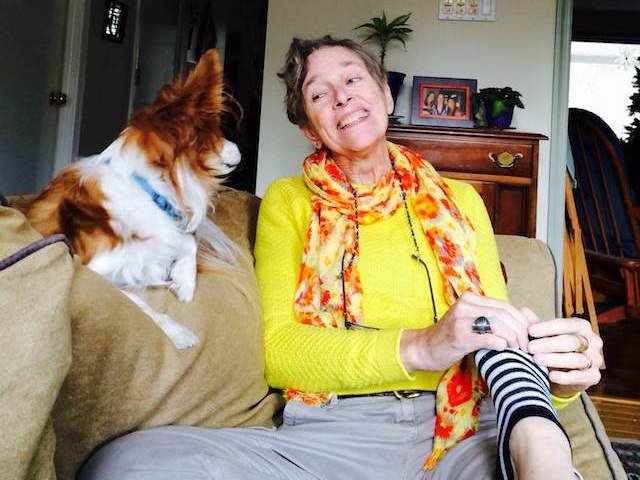 Grace Moses, 63, has had epilepsy since she was 13. “It was awful as a teenager trying to balance out the meds, having seizures in front of friends and just not knowing when one was coming,” said the Wyndmoor resident. “Eventually, I was able to control the seizures and for many years have had seizures irregularly.”

That was until five years ago, when she had five seizures in one day. Moses, who received her master’s degree in occupational therapy from Philadelphia University and had been working as a hand therapist at the Upper Extremity Institute (in Blue Bell) for five years, then began to experience life “on the other side” – as a patient.

“People talk about how hard it is to get on disability, but I got it the first time around,” Moses said. “It was very clear that my brain was not working properly and would not be working properly. I have trouble putting things together as a whole, finding words and difficulty with memory. I’m told I have a very high IQ, but I can’t access the information, and it is very, very frustrating.”

Moses, who has taught yoga for 43 years, now has balance issues and broke her wrist and arm in two falls last year. “I’m still teaching yoga, but it’s a constant reminder of what I used to be able to do,” she said.

Her experience as the mother of a child with disabilities has helped her navigate her own health challenges. Moses was married for 23 years and has four grown children. Her first son was born 12 weeks prematurely.

“Tim has mild cerebral palsy and Asperger’s syndrome, so I had to learn how to deal with disabilities as a caretaker,” Moses said. “He was introduced to music and loved it. I decided to work with very young children who had disabilities and help them through music.” She worked in classrooms in Philadelphia and suburban schools for 13 years.

When her first marriage ended, Moses went back to school to become an occupational therapist. She later met and married Jude Brandt, a physical therapist at Moss Rehab. Seventeen years ago, the couple adopted two daughters from Cambodia.

To help her deal with the increased regularity of her seizures, Moses needed physical and mental exercise every day. In January, 2016, she decided to write a haiku each day and take a photo to go with it. A haiku is a Japanese form of unrhymed poetry with three lines, traditionally comprised of five, seven and five syllables, respectively.

“I don’t know why I chose haiku,” Moses said. “I had never done it before, but I always liked writing and did so for a few years professionally in my early 20s. Anyway, I figured, 17 syllables, how hard could that be? Each night, before I go to sleep, I have my haiku time and will often write a half-dozen of them because, once I get started, they keep coming.”

Inspiration for many of her poems comes from looking through a thesaurus given to her by English teacher Hugh Gilmore at Abington High School on the last day of ninth grade. (Gilmore is now a freelance columnist for the Local.)

“He was my favorite teacher, and I think he saw something in me,” said Moses. “I would open, point to a page and find a big, fat, juicy word and write around it.” Moses also bought herself a new thesaurus, figuring there must have been some new words added since she was a child. She would often walk her dog, Wally, a certified therapy dog, and take photos of nature, people and their pets and anything that spoke to her to pair with the haiku. “Sometimes the poem came first, sometimes the picture,” Moses said.

While participating in a recent Quaker conference, she was asked to display 10 of the photo/poem pairs in the conference’s art gallery. “I felt it was quite an honor,” she said. “Most of the were professional artists.”

Moses recently had another seizure and is unable to drive for six months. She continues to turn to her poetry and photos to keep herself balanced and engaged.

Flourtown author, speaker and writer Barbara Sherf tells the stories of businesses and individuals. She can be reached at bsherf@aol.com. This article is reprinted, with permission, from Milestones, the monthly publication of the Philadelphia Corp. for Aging.