Wyndmoor nonprofit steps in to save life of beloved dog

Wyndmoor nonprofit steps in to save life of beloved dog 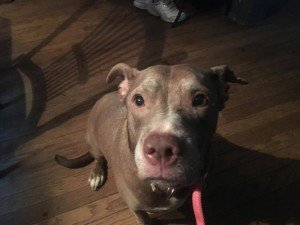 Helen, an 8-year-old Pit Bull Terrier, was saved from probable euthanasia by Sam’s Hope in Wyndmoor.[/caption]

Ed. Note: Marianne Iaquinto is the founder of Sam’s Hope, a 501(c)(3) nonprofit organization based at 901 A Willow Grove Ave. in Wyndmoor that provides food for pet owners who can no longer afford the pet food. Sam’s Hope enables the owners to keep their pets in their homes rather than turning them in to overcrowded shelters, where their chances of survival would be very slim.

In November of 2015 Helen, an 8-year-old Pit Bull Terrier, was diagnosed with Pyometra, a serious and life threatening infection of the uterus that must be treated quickly and aggressively. Helen's mom, Gail Howell of Upper Darby, who previously gave up her paying job to become caregiver for her husband, who had been stricken with cancer, could not afford the lifesaving treatment for her beloved dog.

Fortunately, a veterinary care grant from Sam's Hope in Wyndmoor provided emergency surgery to Helen just in time to save her life.In early August of this year, however, Helen was once again staring death in the face.

Gail, whose husband died recently of cancer, could no longer afford to stay in her home and had to relocate. She had to be out of her home by August 15 but was not able to move into her new home until the end of September. During the transition she would stay in her daughter's home, in which there was a no-pet policy.

Poor Helen was unwelcome, with no place to go. Friends and family urged Gail to take Helen to a shelter and give her up, but Gail would hear nothing of that. She loved Helen dearly, and she knew the chances of an 8-year-old Pit Bull Terrier getting out alive were slim to none.

So, once again she reached out to Sam's Hope, hoping for a second miracle. After a non-stop week of calls and emails to more than 50 rescue organization organizations and sharing Helen's story on social media, we were contacted on Facebook by Allen, a man who would become Helen's angel. He and his family, which included a wife, four children, two dogs and other small animals, were willing to foster Helen until her mom was settled into her new home.

After an application was completed and references called, a meet-and-greet was arranged, and the deal was sealed. This wonderful family, who live in Chester County, were willing to open their hearts and home to Helen.

Helen is doing very well with her foster family; she and 14-year-old Tyler have bonded (apparently she would only take instruction from Tyler and tended to ignore dad), and Helen, who had never been with other dogs before, was enjoying life playing with Phoebe, their 7-month-old German Shepherd puppy.

Other than a few trips to the vet to take care of skin and ear infections, life has been very good for Helen. Thank you, Allen, Linda and family for opening your hearts and home to Helen and keeping her safe until she could return to her mom; you are a very special family indeed!

(Ed. Note: Allen and his family drove Helen to be reunited with Gail on October 1 in her new home in South Philadelphia.)

For more information about Sam’s Hope, whose motto is “Keeping Pets and Their People Together,” call 267-753-0510 or visit www.samshope.org, samshope.org@gmail.com or www.facebook.com/samshope1. Donations are needed and gratefully accepted.