Jill Kulig, VMD, of the Circle of Life Veterinary Clinic in Chalfont, checks out the lovable mutt. (Photo by Marina Bradley) by Marianne Iaquinto After an injury on the job left him out of work, Rob … 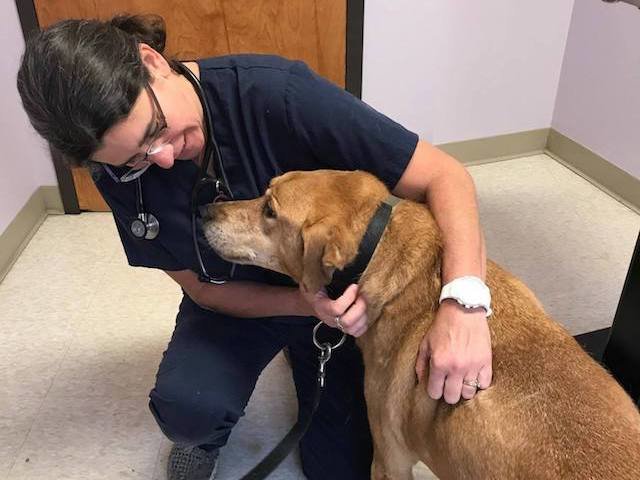 Jill Kulig, VMD, of the Circle of Life Veterinary Clinic in Chalfont, checks out the lovable mutt. (Photo by Marina Bradley)

After an injury on the job left him out of work, Rob (last name withheld) fell behind on his rent and was facing eviction from his apartment of 15 years. Fourteen of those years were shared with a sweet and gentle Labrador/Golden Retriever mix named Hooch.

With no options for pet-friendly housing on such short notice (Rob was going to live in a motel room until he was able to get back on his feet), Hooch’s life was hanging in the balance.

Rob and Hooch’s neighbor and friend, Marina Bradley, of Ambler, was well aware that a shelter was no place for a 14-year-old dog, especially prior to the July 4th holiday, when some irresponsible pet owners were lining up to dump their pets at shelters so they could head out on vacation. So she made a decision to take things into her own hands and try to save Hooch.

We found out about Hooch's predicament via a Facebook post. Rob and Hooch live in Ambler, which is in our service area. Though our mission is to keep pets and their people together, we knew that given the circumstances, we could not keep the pair together at this point but could certainly help find temporary foster care until they could be reunited.

Enter Cheryl Cressman, of Souderton, the lovely, compassionate and caring woman who offered to open her heart and home to Hooch, and ultimately became his angel, just hours before Rob was evicted and Hooch was to be surrendered. Prior to going into foster care, Hooch was seen by our partner veterinarian for exam, vaccinations, blood work, heartworm testing and flea/tick/heartworm medication. It was noted that Hooch had severe osteoarthritis and was in Stage 1 kidney disease. 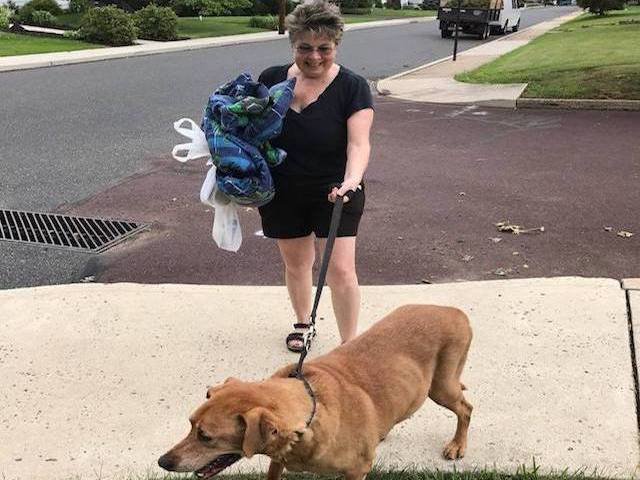 Foster mom Cheryl Cressman of Souderton walks Hooch, whom she is glad to spoil with a nightly massage and a holistic diet. Hooch has a lot of company with Cheryl's two dogs and two cats.

The day after going into foster care, things turned upside down for Hooch. He could not rest, needed to go outside constantly and was drinking huge amounts of water. We thought his foster mom was going to give up on him; things went that bad that quickly.

Hooch had to take another trip to the vet for a urinalysis, which indicated a rip roarin' urinary tract infection (UTI). Hooch was treated for the UTI and was given pain medication for his bad back legs and hips. For a few weeks, things seemed to improve for Hooch; then he began having episodes of panting, shaking and restlessness. A trip back to the vet was in order for an exam and additional testing. The vet believes the episodes are caused by the severe pain from Hooch’s osteoarthritis and that the goal would be using pain management to keep him comfortable. Another rough week followed the vet visit; then things finally began to settle down.

We hope to have Hooch pain-free and in good shape for his reunion with his dad in about six months. In the meantime, he is living the life with foster mom Cheryl, her husband, their two dogs and two cats. He loves his foster siblings, especially Scrappy, a pit mix, and Buckwheat, a kitty who loves to sleep with Hooch on his bed.

Hooch is also on a holistic diet and on Dasuquin for his joint problems, and his angel foster mom spoils him with a nightly massage.

The following link has been established to raise funds for Hooch’s care: https://www.youcaring.com/hooch-943611. Marianne Iaquinto is the founder of Sam’s Hope, a Wyndmoor-based nonprofit organization that provides pet food on an ongoing basis to impoverished pet owners to enable them to keep their pets in their homes rather then surrendering them to shelters. For more information, visit www.samshope.org