Wyndmoor ‘angels’ helping the poor to hold onto their pets

TV reporter Carol Erickson talks with Sam's Hope on an “Ask the Vet” segment on Saturday, Nov. 16, 2013, on CBS-TV, Channel 3.  From left are Denise D'Ascenzo, Erickson and Marianne Iaquinto, …

Wyndmoor ‘angels’ helping the poor to hold onto their pets 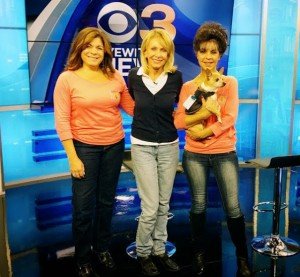 TV reporter Carol Erickson talks with Sam's Hope on an “Ask the Vet” segment on Saturday, Nov. 16, 2013, on CBS-TV, Channel 3.  From left are Denise D'Ascenzo, Erickson and Marianne Iaquinto, who is holding Coco, the first vet care grant recipient for Sam’s Hope. (Photo by Tony Iaquinto)[/caption]

There are lots of organizations in the Delaware Valley that help rescue unwanted, abandoned or abused dogs and cats and try to find them foster homes or permanent homes. There may only be one, however, whose primary purpose is to provide dog and cat food and even veterinary care to enable pets to stay in their homes with impoverished families who might otherwise take them to shelters, where most would be killed.

In January 2012, just a few months before her own Shih Tzu, Sam, passed away at age 11, Marianne Iaquinto began the long and tedious process of starting a non-profit organization. She received approval as a 501(c)(3) Nonprofit Organization from the IRS on Feb. 20, 2013, and began operations on July 1, 2013, for Sam’s Hope, with headquarters at Tony's Pizza City, 901 E. Willow Grove Ave. in Wyndmoor. It is owned by Marianne’s husband, Tony, whose family has lived in Wyndmoor and owned the pizza shop for more than 50 years.

When asked why Sam’s hope was started, Marianne (who, when asked her age, replied, “Too old to want to share that information”) explained, “Every year approximately one million loved and wanted companion animals are abandoned or surrendered to shelters due to the owners' financial inability to provide care for their pets. About 50 percent of them are euthanized. People lose their jobs; tough choices have to be made, and the pet is most often on the short end of the stick.

“The elderly, sometimes all they have in life is their pet, their only reason to get up in the morning. In this case, they don't surrender their pets; they sacrifice their own health and well-being, sharing their food and forgoing medication to provide for the pet.”

As a result of her passion for dogs and cats, Marianne left a lucrative job as vice-president of McGruff Safe Kids’ Total ID System in October, 2013, to devote her full-time attention to Sam's Hope, despite having no salary. Previously she had worked at Johnsville Navy Base in Warminster, as a dental assistant in Chestnut Hill, as a self-employed graphics and web designer and as a partner in Tony's Pizza City.

Thanks to an army of animal-loving volunteers she has recruited in the past year, Sam’s Hope now distributes pet food to three food pantries (soon to be four or five), cat litter to a cat shelter, two support programs, a subsidized senior living apartment complex and directly to individual pet owners in need.

They have also trapped and relocated a feral cat colony after their caregiver passed away, found sanctuary for a sick, abandoned terrier on death row, helped an ill pet owner find sanctuary for eight of his cats and helped find loving homes for three senior pets.

Sam’s Hope’s first pet food distribution to a food pantry weighed in at 40 pounds in July of 2013. They now distribute approximately 4,000 pounds of pet food per month. Where does the money come from for all that pet food? Sam’s Hope started by having pet food collection drives at supermarkets and pet stores; now they receive donations from big box stores, manufacturers, etc., but they still do the smaller food drives at retailers. “It is constantly evolving, a work in progress,” said Marianne.

There are no paid staff members. Ten volunteers put in a few hours per month, and Marianne adds about 50 to 60 volunteer hours per week. “How do I do it?” Marianne asked rhetorically. “Well, I have found that there are things in life that are more important than money. I am happier than I have ever been before. Money doesn't buy that.”

Since they began operations on July 1, 2013, Sam’s Hope has distributed more than 44,000 pounds of pet food. They have also provided veterinary care assistance to dozens of pets, and they just received a second grant from Banfield Charitable Trust, which will enable them to double their impact in year two. 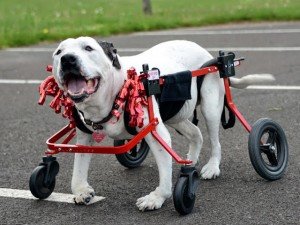 Vet care grant recipient, Lucy, seen here in May of this year, has not been able to walk for over a year. Sam’s Hope was able to provide a full support wheelchair for her, as well as ongoing medical care. (Photo by Marianne Iaquinto)[/caption]

They also recently received funding from the Doris Day Animal Foundation to start a new program, Meals for the Pets of the Homebound Elderly. “We will be working with Aid for Friends,” said Marianne. “They provide companionship and home-delivered meals. Pet meals will be delivered along with people meals on a monthly basis, but there is so much more to do. The next projects/programs will be a spay/neuter program and a voucher program that will help encourage the adoption of senior pets.”

Marianne was born in Athens. Greece, where her Air Force dad was stationed. When she was 12, the family landed in Churchville, Bucks County. She attended Council Rock High School and Bucks County Community College.

“My mom and dad both love animals, especially dogs,” said Marianne. “They currently have two dogs, a Greyhound rescue and a Chihuahua rescue. I cannot remember a time when they didn't have at least one dog. My own first pet was a Dachshund named Laddie. Then there was Sam the Dalmatian, Cherie the Poodle and Mopsey the Cockapoo.

“We also had birds: parakeets, lovebirds, finches, cockatiels, canaries and conures. Then there were hamsters, gerbils, guinea pigs, mice, turtles and tropical fish. We also had chickens that laid huge double-yolk eggs. There was Daisy the Duck, Rascally Rabbit ... Are you sure you want me to go on?

“I currently have a Havanese rescue named Molly. We adopted her shortly after Samantha passed in 2012. Though I didn't let enough time pass (I felt like I was disrespecting Sam by adopting a dog so soon), I just could not bear coming home to a very quiet, empty house. I also have a tank full of tropical fish. I would love to have at least one more dog; I believe that dog number two will find me when the time is right.”

It probably will not come as a shock to learn that Marianne is a vegan. What is rather surprising, however, is the fact that her husband, Tony, is a vegetarian, which may make him the only vegetarian pizza shop owner in creation. “Given my druthers,” said Marianne, “Tony’s Pizza City would be a vegetarian place, but it seems that vegetarians are few and far between in Wyndmoor and surrounding towns.”

What difficulties has Marianne had with Sam's Hope? “The biggest challenge is finding people available to volunteer during business hours, as that is when the stores are open to pick up pet food and the pantries are open to deliver pet food.

“We are also vehicle-challenged and in desperate need of a ‘man with a van’ to help us out, or someone who will loan us a van for a few hours a week.”

Raising funds is like getting a bone away from a German Shepherd, but Sam’s Hope has been awarded four grants in a year's time. They also accept donations of small, working electronic devices, (laptops, tablets, phones, game systems, DVD players, smartphones, etc.) and other saleable items, which they sell on eBay.

They also have a page on their website where people can shop Amazon.com, Walmart,com, BestBuy.com, Petsmart.com and other online retailers, which earns them a small commission. “Of course, we cannot save them all,” said Marianne, “but we can certainly make a difference, one pet at a time.”