Members of Worldtown Soundsystem, which plays the Pastorius Park Concert Series on Wednesday, July 12. by Carole Verona Integrate the disco-techno sound and vibe of house music with soul, funk, … 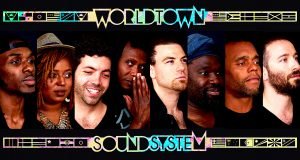 Integrate the disco-techno sound and vibe of house music with soul, funk, Afro-Latin rhythms and beats and a lot of percussion. Deliver it to the audience by a DJ plus a group of live musicians, vocalists, and dancers and you come up with Worldtown Soundsystem. The group makes its Chestnut Hill debut at 7:30 p.m. Wednesday, July 12, at Pastorius Park.

“We’re an eight-piece band, made up of a very diverse mix of people,” said Ben Arsenal, co-founder, DJ, percussionist and producer. “I grew up in Vermont and our co-founder Oluwafemi (Femi) is from Nigeria. We’re a super high-energy, lively group. No matter where we go, people will dance with us.”

Stan "daMan" Hunt, one of the band’s percussionists, died a few weeks ago.

“He was a really special guy with his energy, his dedication and his aura,” said Arsenal. “There’s no way we can replace him, but we’re trying to work it out with other folks who are coming in to try to fill his shoes a little bit.”

Femi, who is also a visual artist, designed the graphics on the group’s merchandise – T-shirts, leggings, and dresses – which will be for sale at the show.

Arsenal said that the group chose the name Worldtown because “it represents our mission to unite people from different places. The bottom line is we’re all from planet Earth, and there’s no reason why we can’t all get together.”

The group also refers to itself as a system, not a band, because sound system is a term that comes from early Jamaican reggae. Arsenal explained that Jamaican producers and musicians assembled many speakers to create a big, loud sound system through which to play their music.

“That’s our aesthetic – this big group of people playing high-energy awesome music together,” he said.

Worldtown Soundsystem first hit the scene six years ago as DJs throwing dance parties. The group as it exists now loosely came together around three and a half years ago.

“It’s a very different format than the typical band because it’s centered around the DJ and around the beats,” Arsenal said.

How has the group evolved over time?

“We’ve learned how to communicate with one another during rehearsals, how to write songs together, how to communicate and how to improvise on stage,” he added.” We used to be much more rigid. Personally, I have grown as a producer, working with so many different musical perspectives. The others have evolved as well as both musicians and songwriters.”

Arsenal and other members of the group are proud of Worldtown’s volunteer involvement with the community. Philly Urban Creators transformed a two-acre abandoned lot into an urban farm, community resource and innovation center in North Philadelphia.

“We got in touch with them and offered to help raise awareness about their project and to rally volunteers earlier in the spring when it was critical maintenance time at the farm,” Arsenal said.

Worldtown was looking for a family-friendly event that folks could attend on a weekend.

“In the beginning,” he said, “we wanted to create a space for folks who were involved with Worldtown or who knew about us to come together outside the nightlife scene to do something positive in the community.

“We worked with Dr. Lynne Andersson, a professor that I studied under at Temple University, who made it a class project with her students to design the volunteer day. Femi, Gary and I met with her class at Temple University every other week during a semester in a series of roundtable sessions to talk about how to put together a community event. The students spoke with other professors and students and we ended up getting about 150 volunteers from our network and Temple’s network to work at the event. I was just contacted by one of Dr. Andersson’s colleagues who asked me to come meet with her soon about continuing that relationship. That’s pretty cool.”

Pastorius Park is two blocks west of Germantown Avenue at the corner of Millman Street and Hartwell Lane. Rain venue is the lower auditorium at SCHA Cherokee Campus. More information about the concert series is at www.chestnuthill.org or call 215-248-8810.