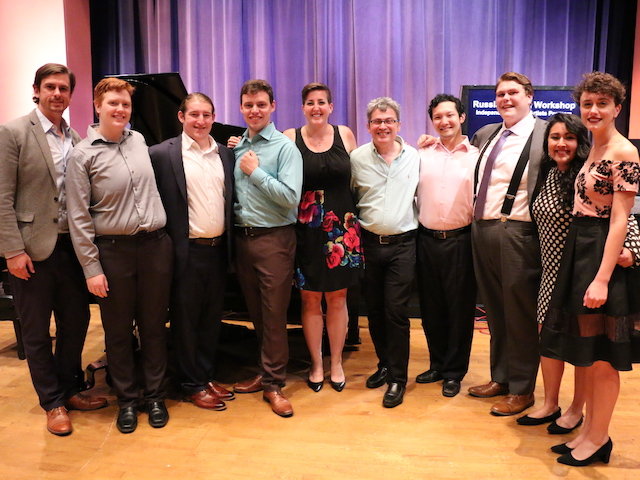 Donald Nally and The Crossing brought their 2018 “Month of Moderns” to a spectacular finale Saturday, June 30, with the world premiere performance of Kile Smith’s “The Arc in the Sky.” Heard by an audience that truly jam-packed the main sanctuary of the Presbyterian Church of Chestnut Hill, the 65-minute, three-section, nine-movement work for unaccompanied choir is a masterpiece of emotional expressivity and spiritual revelation.

Smith, a local composer whose voice is regularly heard on WRTI, 90.1 FM, based his cantata on texts by Robert Lax, who lived from 1915 until 2000. The poetry Smith employed is straightforward and concise. It’s evocative of deeply embedded feelings and provocative of visionary thoughts. One can’t read them without inviting them into one’s very soul, and one can’t consider them without being changed by them.

Smith divided his “Arc in the Sky” into three large sections: “Jazz,” “Praise” and “Arc.” He then subdivided each of these sections into three movements of their own. “Jazz” features “Why did they all shout,” “There are not many songs” and “Cherubim & Palm-Trees.” “Praise” is made of “I want to write a book of praise,” “The light of the afternoon is on the houses” and “Psalm.” “Arc” is comprised of “Jerusalem,” “I would stand and watch them” and “The Arc.”

Although each of the larger sections strikes a different compositional style from either of its two companions, all three are held together by Smith’s uncanny ability to speak in a consistent aesthetic tone. That musical personality is characterized by an imaginative use of chromatic tonality that sometimes seems to include every one of the 12 tones in the octave at the same moment without damaging the listener’s unbreakable connection with an unshakeable tonal center.

Smith has voiced his choral writing in “The Arc in the Sky” with extravagance. There are times when the bass parts are exceedingly low while the soprano lines are daringly high, and all the space in between is filled with flowing polyphony. Then there are others when the writing recalls the unison monody of Gregorian chant, the shape of the vocal line determined solely and sensitively by the shape of the words of the text. There are passages of dense dissonance balanced against measures of triadic simplicity, once again directed by the profile of the lyrics.

Yet throughout the entire length of “The Arc in the Sky,” Smith never permits his music to cloud the bracing clarity of Lax’s poetry. Even during moments of shimmering musical beauty, the surgical precision of Lax’s words remains undimmed.

The work begins with the cool bounce between the women and men answering each other in “Why did they all shout.” The delicate texture of “There are not many songs” glows with transparency in sweet preparation for the syllabic syncopations of “Cherubim and Palm-Trees.”

From the outset, “Praise” strikes a different tone. The men of the choir sing ”I want to write a book of praise” in a sustained legato that evokes the medieval plainsong chanted in an isolated monastery dedicated to prayer. The women respond in “The light of the afternoon is on the houses” with splashes of phrases that sometimes seemed motionless and suspended in air Saturday evening. All comes together in “Psalm” in intense shifts of dynamics than run the gamut from very loud to very soft.

The beginning of “Arc” with “Jerusalem” sets a song-like standard that the music maintains throughout its length. Although contrapuntal development bubbles underneath the surface of the principal thematic melodies, they retain their preeminent position straight through until its gentle final cadence. The men imitate what the women begin in “I would stand and watch them.” Despite the complexity of one motif piling upon another, Smith’s music never diminishes the paramount importance of Lax’s poetry as it intimates that there are other worlds of concern and wisdom than those that preoccupy our muddled daily lives. The final movement, “The Arc,” of both Sky and Sea, offers a hurtling crescendo of rolling phrases cascading one upon the next until its shattering conclusion brings the entire sonic journey to a majestic consummation.

Under Donald Nally’s inspired and inspiring hand, The Crossing sang “The Arc in the Sky” with passion and precision. The sound the choir produced was never a matter of mere singing pitches and rhythms. It was more a case of projecting tones that opened up the listener’s mind, heart and soul to free his or her spirit to soar to the heights of revelation only great art can see and hear in the distant promise of self-knowledge.

Philadelphia’s Russian Opera Workshop, founded and directed by Ghenady Meirson, presented Alexander Borodin’s “Prince Igor” in the Warden Theater of the Academy of Vocal Arts June 27-29. I caught the final performance and came away mightily impressed by the opera and the concert rendition it received.

Like many an operatic score of surpassing beauty, the libretto Borodin labored under is a mish-mash of pseudo-historic drivel that makes little narrative sense but that somehow inspired the composition of appealing and compelling vocal, ensemble and choral music. It’s actually the score that delineates the story more effectively than does the text by creating characters that show real emotions in their dealings with each other.

The cast of Friday evening’s performance was headed by Tim Renner, a stentorian baritone who invested the title role with heroic stature and compassionate humanity. Soprano Gabriella Chiej was a noble Yaroslavna, Igor’s wife. She sang with clarion brilliance and expressive lyricism. Tenor Michael Laporte portrayed Vladimir, Igor’s son, with ringing tones and genuine sensitivity to convey his conflicted loyalties. Baritone Michael Tallino was a smarmy yet dangerous Prince Galitsky, Yaroslavna’s brother, and male contralto Ashton Worley gave a stirring account to the role of Konchakovna.

The evening’s finest performance, however, was that given by Ghenady Meirson at the Steinway & Sons grand piano. His playing of the original orchestral score evoked all its timbres as well as provided rock-solid support for his young singers.

You can contact NOTEWORTHY at Michael-caruso@comcast.net. To read more of NOTEWORTHY, visit www.chestnuthilllocal.com/Arts/Noteworthy.