Kathy Bonanno with a copy of her poetry book, "Slamming Open the Door." by Len Lear “True wisdom can only come from suffering.” –Aeschylus, ancient Greek tragedian "Leidy is here. Her spirit is … 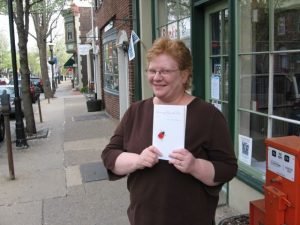 Kathy Bonanno with a copy of her poetry book, "Slamming Open the Door."

"Leidy is here. Her spirit is all around us, and she would have loved this place," said retired English teacher Kathleen Anne Sheeder Bonanno in September of 2011 when she opened Musehouse: A Center for the Literary Arts at 7924 Germantown Ave. in Chestnut Hill. For five years Musehouse was a haven for writers, both celebrated and unknown, to exchange ideas, gain inspiration and motivation from one another and read their works to a sensitive, compassionate audience of their peers.

“Musehouse added so much to Chestnut Hill, and I was so sad when her cancer came back, and she had to close it last year,” said Elliott batTzedek, outreach coordinator at Big Blue Marble Bookstore in Mt. Airy, last week.

Bonanno, a kind, nurturing and generous soul who was a muse to so many aspiring writers, had turned the most horrific personal tragedy into a source of spiritual outreach. Bonanno opened Musehouse as a tribute to her daughter, Leidy. On July 7, 2003, Leidy, a 21-year-old recent nursing school graduate in Reading who had just been hired to work in the cardiac unit at Reading Hospital, was murdered by an ex-boyfriend, Joseph Eaddy. He was later convicted of the crime and is currently serving a life sentence without parole at a prison in northeastern Pennsylvania. Leidy (pronounced "Lady") was also a graduate of Jenks Elementary School and Bishop McDevitt High School.

But Kathy, who handled the tragedy with Job-like patience and wisdom, died on Thursday, June 15, at age 61 after a long battle with cancer. Her sister Suzanne announced this on Facebook and said that she, husband David and Kathy's beloved dog were all with her when she died.

According to a statement from her family, Kathy “was a woman of extreme generosity, heart and incomparable wit. Lover of puns, dogs and the arts, unparalleled raconteur, gifted teacher, poet of grace and candor, tower of strength and world-class spirit.”

Bonanno, who lived in Mt. Airy for 25 years with her husband and two children before moving to Oreland in 2001, earned a rave review in the April 12, 2009, issue of the New York Times by critic David Kirby. Her book of poetry, “Slamming Open the Door,” shot to number 15 in overall poetry sales in the U.S., according to amazon.com (just below Robert Frost and John Updike, pretty impressive company). Virtually every poem in the book dealt with some aspect of Leidy's murder and its aftermath.

The book also won the coveted Beatrice Hawley Award, and two of its poems were nominated for the Pushcart Prize. (This is a prestigious American literary prize by Pushcart Press that honors the “best poetry, short fiction, essays or literary whatnot" published in the small presses over the previous year.) The first poem in the book, "Death Barged In," was selected by the Academy of American Poets as their "poem for the day" on April 15, 2009. Bonanno also won the Purple Ribbon Award from the Lutheran Settlement Home for her advocacy on behalf of the victims of domestic violence.

In a 2009 interview with the Local, Bonanno, a teacher of English and creative writing at local public schools who had been writing poetry since childhood, explained, "I really did not want to write anything about it (the murder) for one year afterwards except for a poem I wrote for the memorial service, but it was a mountain standing in the way. It had to be addressed before I could consider writing about any other subjects.

“This book wanted to be written, although it took me four years to write. Writing these poems was therapeutic, but it was also painful because it brought back all the memories and all the details. There is a spiritual component to this book. I feel Leidy's presence and sometimes see signs of her presence. I now acknowledge that there are mysteries in the universe that we will never understand. I think Leidy lives on, and I'm OK not knowing more than that."

A native of Reading, Kathleen came to Philly to attend Temple University, where she earned an undergraduate degree in English and a master's in education. She proceeded to teach at Dobbins High School in North Philly for five years and Cheltenham High School for 13 years.

Kathleen was married for 34 years to David Bonanno, a native of Caldwell, NJ, whom she met when both were students at Temple. Also a poetry aficionado, David applied for a job at the American Poetry Review after college. He was hired, eventually became a co-editor and was there for more than three decades. Kathleen, meanwhile, had her work appear in numerous publications.

In 1987 the couple adopted two siblings — Leidy, then 4, nicknamed Ladybug, and Luis, then 3, — who had both been abandoned by their birth parents in their native Chile. Luis attended the Center School in Abington for children with learning disabilities and then Springfield High School. He later became a roofer.

There is not enough space here to mention all of Kathy's philanthropic works, but here is just a small sampling: she helped coordinate service auctions gratis, paid for and stuffed huge toy/clothing baskets for kids in the Berks Women and Crisis shelter, coordinated annual ice cream socials that benefitted various non-profits, tutored children at no charge for months, was always the first to show up at any fundraiser with a casserole, etc.