Who wouldn’t want to spend some relaxing time at “Stonington Harbor,” brought to life colorfully by Letven in this 18” by 24” watercolor landscape?[/caption] by Len Lear Now I am the first … 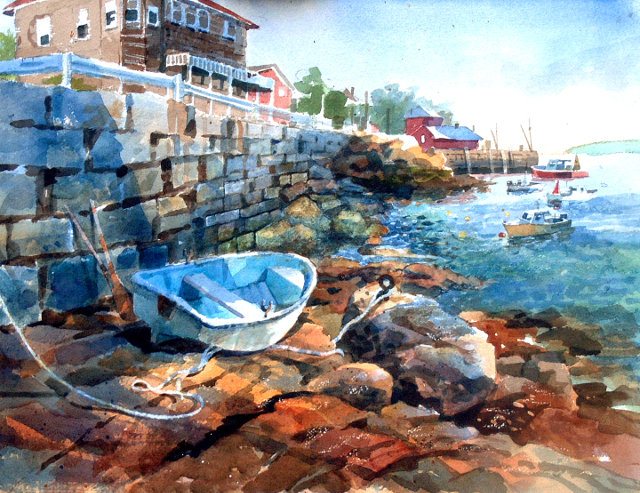 Who wouldn’t want to spend some relaxing time at “Stonington Harbor,” brought to life colorfully by Letven in this 18” by 24” watercolor landscape?[/caption]

Now I am the first to admit that I am not an art expert. The most I can say is that I had some excellent courses in art appreciation with an exceptionally enthusiastic professor at Muhlenberg College many years ago and that my wife and I have visited countless art museums in the U.S. and Europe.

But I will state without reservation that the works of Ed Letven, whose paintings are currently on display for the indefinite future at the Chestnut Hill Gallery, 8117 Germantown Ave. (it is not an exhibit, per se, with an end-date), are among the most beautiful and poignant I have ever seen. The brushwork, use of color and emotions evoked are at an ethereal level one rarely sees outside of elite museums. And Ed has excelled in watercolors, oils, gouache and acrylics and is equally dextrous with representational art, still lifes, landscapes and abstract expressionism.

And Ed is no flash-in-the-pan, At age 82, he is actually on his second career, having owned and operated a major advertising, public relations and marketing agency in the area from 1968 to 1997 that employed more than 60 at its peak. It became one of the 10 largest in the Philadelphia area.

According to a commentary by Dr. Burton Wasserman, Professor of Art, Rowan University, “Ultimately, of course, the true significance of Letven’s art consists of his remarkable ability to transform a sight seen with the naked eye into a moving piece of heartfelt poetry.”

Letven graduated from Olney High School in 1951, winning a four-year scholarship to Philadelphia Museum School of Art at Broad and Pine Streets (UARTS). He graduated from UARTs in 1954 with a degree in advertising design and a major in photography. (He met future wife, Sheila Roseman, in art school.)

The Korean War had just ended in 1953, and Ed volunteered for the draft. After the armistice was signed, he was sent north to a camp six miles from the Demilitarized Zone. “The aftermath of destruction was everywhere,” he recalled. “It was ugly and brutal. Not a tree standing. After four months of trudging through mud and taking pictures of every horrible thing you could imagine and some six months left of my tour, I was called down to Seoul...”

After his military service, Ed found work as a freelance artist and later as an agency art director. In 1962 he landed his first real ad agency job as a senior art director for W.B. Donor Inc., a large Baltimore Agency which had an affiliate in Philly. It was the first ad agency in the city to offer television services. “My boss was a great ad man, very sharp, very successful,” said Ed, “but unfortunately, he had an explosive temperament and was a really difficult person, hard on everyone.

“Though he treated me well as soon as I learned the ropes, I decided that all his miserable behavior showed no future path for me or anyone else he hired. That proved to be right in many ways. He was very unhappy when I quit, but now I had agency stuff in my book and knew how to perform in the explosive new world of television and the making of commercials.”

Ed started his own agency, Ed Letven Design Associates (which later became Letven Advertising, Inc.) in 1968, working in the attic of his home in Elkins Park. He had no assistants, and his wife answered the door for salesmen, generally with a baby in her arms. At first Ed had many local, privately held retail accounts such as clothing, candy, furniture. etc. In 1975 he resigned most of them. 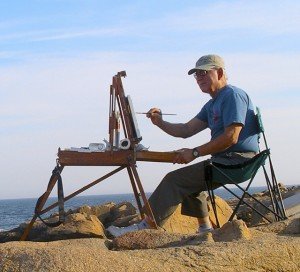 Ed, 82, is seen painting on the orange rocks at Gloucester/Rockport, Massachusetts. He calls it “the most beautiful rocky shore in New England except for Acadia.”[/caption]

“I saw clearly that there was no future in any of them for my company,” he said. “Nice folks but emotional about every buck spent. Budgets were canceled on whims. I decided to work only with larger companies that set budgets and considered marketing and advertising essential. Then things really started to happen...

“But I was no 'mad man' (referring to 'Mad Men,' the TV show about an ad agency in the 1960s). I wanted to come home at night and be around while our four kids grew up. Any corporate type who gave me a hard time would almost certainly receive a letter of resignation. I never had to worry again about some screwball getting up on Monday morning and deciding to fire me. I was my own boss always.”

Ed won about 50 awards for his work over the years, including three silver statue awards for first place in television commercials he had produced. He has also played piano for most of his life, and that skill helped him create music themes and jingles for the commercials.

Ed had essentially become an administrator, however, and the creative soul in him was begging to get out. So he sold the agency in 1997 and returned to his true passions — fine art, motorcycles and sailing. He worked first in watercolors and later in other mediums.

"For me, no other medium expresses the vibrancy, the beauty and the soul of the scene as a watercolor can,” Ed has said. “Because watercolors are transparent, they allow few mistakes. And unlike opaque media, such as gouaches and oils, watercolor is often unforgiving. Though watercolors seem chaotic at times, the wonderful accidents that happen generate feelings of joy when things come out well."

Regarding the motorcycles, at 82 Ed has been reduced to a motor scooter, which he plans to sell soon. He also has an electric bike. He used to sail in the Chesapeake and the ocean. He crewed on two trips from Barnegat Light to Martha’s Vineyard in a good friend’s 35-foot Pearson.

“We encountered a brutal front with winds of up to 60 knots,” he said. “We nearly went down after two days in a non-stop fog. I lost my taste for it. I was at the helm after the storm as we sailed down through New York’s waters, and I vowed never again.”

For his artwork, Ed was among eight finalists in the U.S. for the cover of Watercolor Magazine Quarterly. He also won the grand prize for an oil painting in an international show. He teaches watercolor mainly at his home studio in Abington and previously taught for almost four years at the Abington Art Center.

“It's very difficult for galleries to make it these days,” Ed said. “The middle class is generally broke, and they hardly mention art in the schools these days. The rich buy only in New York. I’ve had big sales and over the years have probably sold about 60 or 70 paintings. Not bad for an ex-ad man.”