Woodmere exhibit 'a history book tossed into a blender'

Imagine a subway hurtling through early America: Minutemen and colonial dames fly past in a whirlwind of parchment and red brick.

Woodmere exhibit 'a history book tossed into a blender' 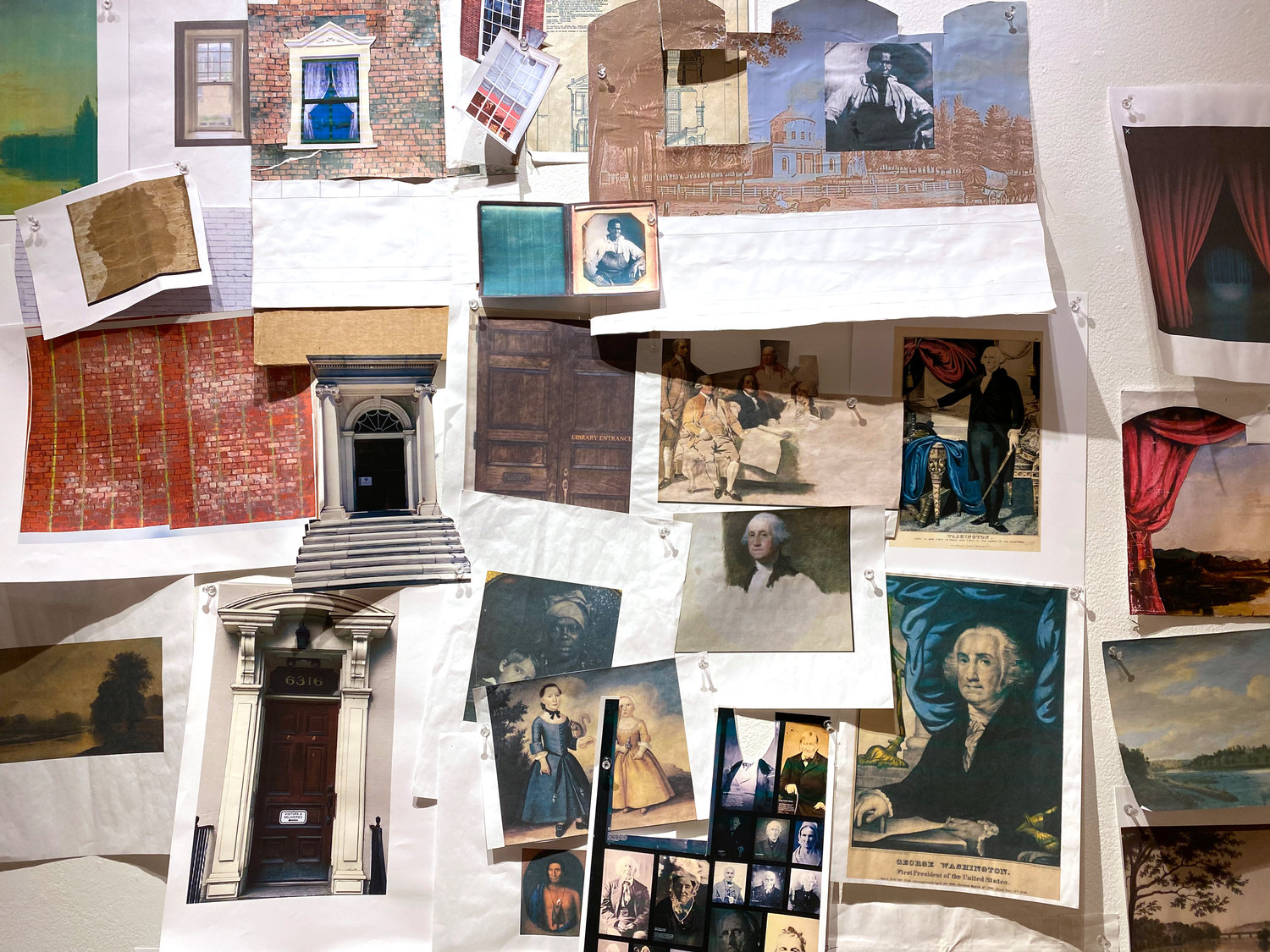 This detail installation photograph is of the artist's idea wall on view in Woodmere's “History in Motion.” The artist often begins new projects by collecting images from a variety of sources. This is part of Judd's source material for the Portal to Discovery mural. (Courtesy of Woodmere Art Museum)
Posted Wednesday, March 17, 2021 10:45 am
by Pamela J. Forsythe

Imagine a subway hurtling through early America: Minutemen and colonial dames fly past in a whirlwind of parchment and red brick. Look sharp and see an amused Ben Franklin, Lenape negotiator Teedyuscung, abolitionist James Forten or a headless founding father, floating in midair.

This impressionistic collage is brought to life in “The Portal of Discovery,” a 400-foot mural that now envelops the 5th Street/Independence Hall stop on SEPTA's Market-Frankford Line. Woodmere Art Museum details its creation in “History in Motion: Tom Judd's Subway Mural” (woodmereartmuseum.org/history-in-motion), which opened Feb. 27 and continues through June 13.

“History in Motion” is a behind-the-scenes tour through Judd's mind as he conceived the mural that lines east- and westbound platforms. The project was part of a $20.4 million renovation that roiled 5th and Market above and below ground for four years and was the station's first total makeover since the 1976 Bicentennial.

“I wanted my subway mural design to capture this sense of unbridled curiosity and passion for knowledge…,” Judd says in exhibit text. He won the commission in 2018 on the strength of cardboard presentation panels put together with glue and scissors. The panels are on view with Judd's “idea wall,” a collection of sketches, catalog cut-outs, postcards and photographs of objects, faces and other visual elements that intrigued him.

Judd combines the scraps, adding and subtracting until he arrives at what matches his vision. Portal of Discovery is a wild arrangement of windows and doors, as well as oil portraits, sketches, and words — a history book tossed into a blender.

“Tom's murals are an encompassing experience…immersive, quirky,” said Bill Valerio, Woodmere director and friend of the artist. “Tom loves Philadelphia's museums and libraries, and it shows.”

Talking with Judd at the exhibit's virtual opening on March 2, Valerio said he'd counted 70 historical figures in the work. All are significant, but many are not widely known. Throughout the mural, the artist created visual parings to elevate in an almost subliminal way overlooked parts of American history.

To the left of president/slave-owner Thomas Jefferson is a less-familiar face: William Still, abolitionist and a conductor on the Underground Railroad. Next to a Benjamin West portrait of Elizabeth Peel, of whom nothing is known except social status, is Frances E.W. Harper, anti-slavery lecturer, author and with Ida B. Wells and Harriet Tubman, a co-founder of the National Association of Colored Women. Unable to find a picture of Oney Staines, who liberated herself from enslavement to the family of George Washington, Judd substituted an enlarged silhouette and layered it like a dark shadow over the first president's Philadelphia home.

Along with wavy windowpanes, polished doors and heavy velvet drapes, Judd's nod to Charles Willson Peale, whose Philadelphia Museum was a particular inspiration, chalkboards appear throughout the mural. On one, a Liberty Bell sits beneath an 1852 quote from Frederick Douglass: “There is not a man beneath the canopy of heaven who does not know that slavery is wrong for him.” The words are rendered in childish cursive script, like a schoolroom exercise.

Photographs and video in the exhibit convey last summer's chaotic installation amid station construction, pandemic protocols and the constant rumble of El trains. The mural, painted and printed on large fabric panels, was affixed to the 112-year-old walls and slathered with a clear protective coating that Judd says will shed most potential damage. Future repairs can be made if needed. “I'm clear that this is in a very public place. You protect it the best you can.”

Judd claims visual sensibility is his first consideration. It isn't until later that he recognizes other ways in which the elements in his work connect and reinforce one another. In Portal of Discovery, that unconscious artistry will keep SEPTA passengers engaged through many commutes.